Watson balances life on the field with life in a fraternity 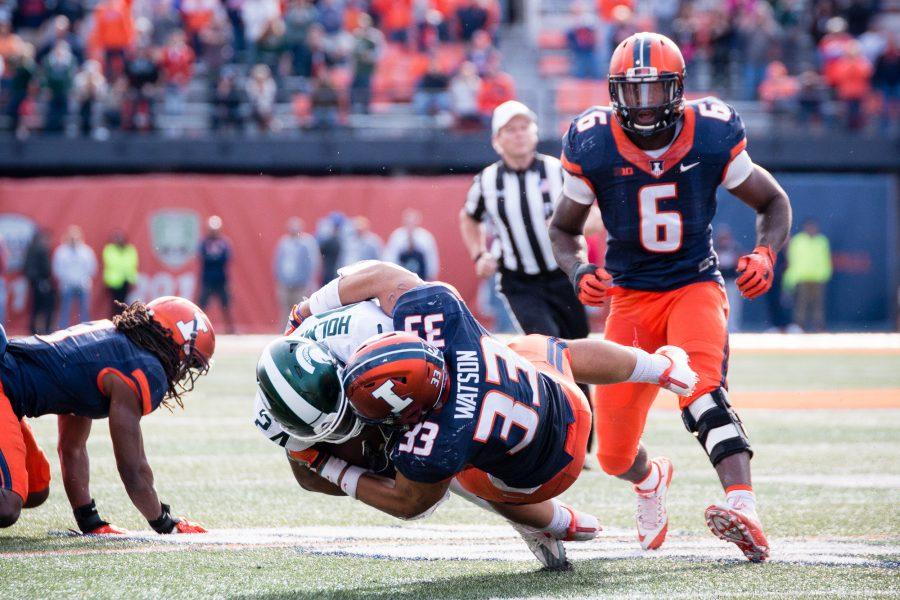 Making an impact on the football field was not going to be enough for Illinois linebacker Tre Watson. He wanted to make one off the field, as well.

Last spring, Watson began the process to join the Omega Psi Phi Fraternity, and during this semester, he was elected president.

“I was introduced to it by my dad,” Watson said. “It was something I felt that I wanted to include in my life and make an important decision to do that.”

Watson’s dad, Tim Watson, was a member of Omega Psi Phi at Howard University as well as a safety on the football team.

His dad has kept ties with his fraternity brothers over the years, and Tre said he has grown up surrounded by members of the fraternity.

Omega Psi Phi is one of the five chapters that makes up the University of Illinois Black Greek Council, but there was never a decision of which fraternity he wanted to join: it was always Omega Psi Phi.

Balancing his life in the fraternity with his life on the football field is not a simple task, but Watson said his dad is a great model to show how it can be done.

Tim was successful in college as a football player. He set the record at Howard for most blocked punts in school history and was drafted in the sixth round of the 1993 NFL draft. He stayed in the NFL until 1997.

Watson is a redshirt sophomore, and this is his first semester for him truly balancing the responsibilities of being an in-season football player with those of a fraternity member.

But so far, Watson has shown no signs of struggling. Linebacker Hardy Nickerson has noticed big changes in Watson’s game over the season.

“He has been playing well all season since he has been in the lineup,” Nickerson said. “He is a guy we count on, and he is a guy who goes out there and steps up and makes plays. I love playing next to him, and it is just awesome to see a guy develop like this.”

After playing all 12 games for the Illini in his redshirt-freshman season, Watson was chosen as the Illini’s Defensive Newcomer of the Year. He made his first career start this season against Nebraska and set a new career high for tackles against Michigan State with 16, earning him Big Ten Defensive Player of the Week.

Smoot said that Watson does most of his talking on the field with his play. As part of a defense loaded with upperclassmen, Watson does not have a vocal role out on defense.

Smoot said Watson will become more of an audible leader as he continues to play well and emerge as a leader.

“He is more of an action guy,” Smoot said. “He hasn’t had as many opportunities to be as vocal as he is going to be over the next few years as his role on the team grows. This is his first year getting a good amount of playing time, but I feel like hew will grow into a (vocal) player.”

Watson said Omega Psi Phi is based around the principles of manhood, scholarship, perseverance and uplift. He’s not the only player on the Illinois football team that works under these fundamental beliefs as a member of Omega Psi Phi: wide receiver Justin Hardee is in his fifth year at the University of Illinois working toward a master’s degree in Recreation, Sports and Tourism.

Watson made sure to speak to Hardee before he joined the fraternity.

“He came to me, and I led him in the right way.” Hardee said. “Now we are brothers in the same fraternity forever.”

Watson took part in the fraternity’s events. But he said his main focus has been football, and it is paying off.