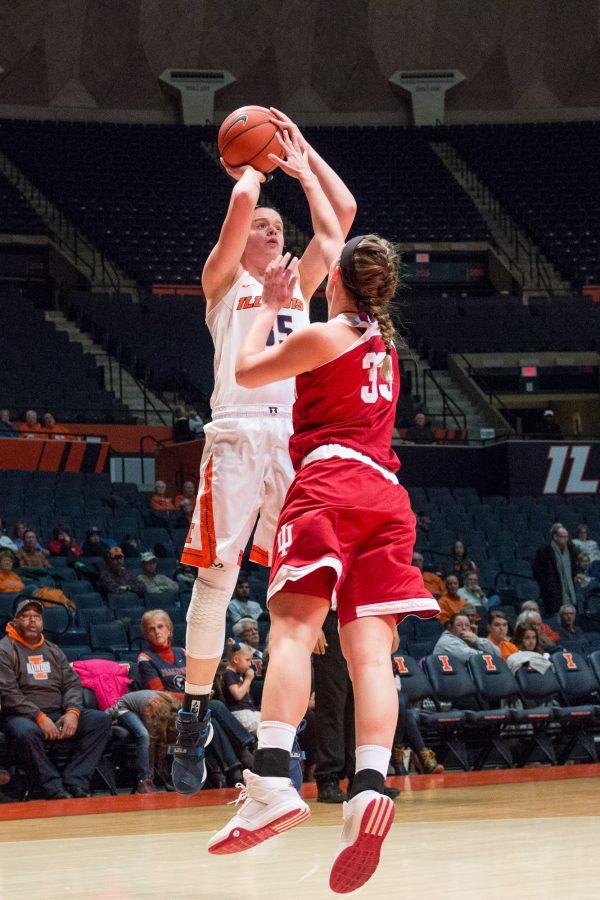 Illinois’ Alex Wittinger shoots a jumper over Indiana’s Amanda Cahill during the game against Indiana at the State Farm Center on February 10. The Illini lost 70-68.

Hidden Stat: Outside of Shayla Gore, the Ilini held Marshall to 7-of-38 shooting in the game.

Foul trouble dogged the Illini from tip-off against Marshall, and it was that foul trouble that did them in as the Illini lost their season-opening match 55-53 to the Bulldogs.

Five Illini finished with at least three fouls, and Marshall scored 18 of its 55 points from the free throw line, including the game-winning points.

“I was disappointed in the final minute, as far as the foul, I feel like we had a good possession,” head coach Matt Bollant said. “We didn’t need to contest, she wasn’t making that shot. We need to be more disciplined with contesting the shot and not fouling.”

The Illini jumped out to an early 17-4 lead. Kennedy Cattenhead and Brandi Beasley were doing the damage for the Illini early, and the team’s offense as a whole looked sharper than it did against Drury on Sunday.

As much as Gore’s scoring kept Marshall in the game – she finished with 29 points – so did the Illini’s persistent foul troubles. By halftime, the Illini had committed 13 fouls, allowing the Bulldogs to shoot 18 free throws.

The Illini were forced to make changes to their game to accommodate guards Beasley and Jaylene Kirkpatrick getting into trouble early.

“I think we got a little stagnant,” Bollant said. “(Beasley and Kirkpatrick) penetrate and kick, the find the shooters when they’re open. That definitely hurt us in that second quarter.”

Marshall led the game 43-41 after three quarters, and the Illini looked to be wearing out, especially on the glass.

In the final quarter, Marshall initially grew its lead behind more stellar play from Gore, but the Illinois battled back and took the lead with less than a minute left in the game.

Marshall took their time before swinging the ball across the court to Gore. Gore missed her three-pointer, but was fouled on the shot by Cattenhead. Gore sank all three shots form the line, and on the final play of the game, the Illini couldn’t find an open look.

Kirkpatrick was forced to take a deep three which she missed.

The Illini only have one day to prepare for their next game Sunday at noon against the Arkansas at Pine Bluff, Arkansas.

While they may not have a lot of time to work on their game, the Illini know what they need to focus on the most.