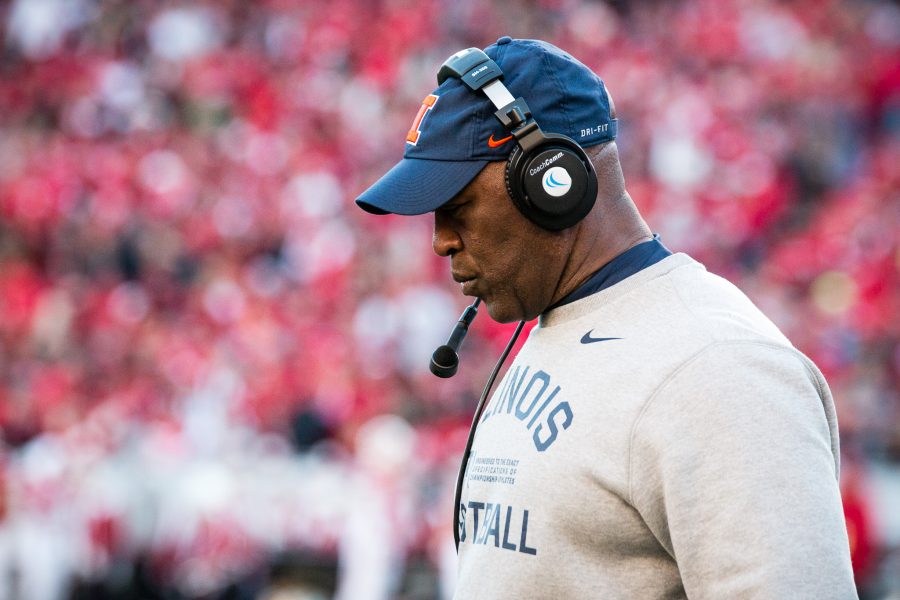 Illinois head coach Lovie Smith looks down as he walks back to the sidelines during the first half of the game against Wisconsin at Camp Randall on Saturday, November 12. The Illini are losing 31-3 at half after the first half.

With just two games left in the season, Illinois football will likely not be going bowling after its 48-3 loss to Wisconsin on Saturday.

The only unexpected part came in the second half when head coach Lovie Smith put in quarterback Wes Lunt in place of redshirt freshman Jeff George Jr.

Lunt hasn’t played since he injured his back Oct. 8. Though he’s dressed for the past few games, he has been on the sidelines, rather than in the pocket.

Going with Lunt in the second half made sense. George had thrown four interceptions at that point.

But Lunt barely proved he should be back on the field.

The offense couldn’t get anything going. George threw one long 35-yard pass to receiver Justin Hardee but that was about it.

The season started with Lunt and offensive coordinator Garrick McGee supposedly on the same page. They came across as great coach and quarterback.

But as the Illini started losing, that relationship seemed to be up in the air.

When Lunt went out with the injury and he failed to return right away, the injury seemed serious. But then he was dressed on the sidelines, but not playing.

This gave renewed validation to questions that the relationship was in jeopardy. Coaches went with the younger George who seemed to acquire even more confidence with his Homecoming win.

So putting Lunt in this game was both a surprise, but the right move on the coaching staff.

On the rushing side, Kendrick Foster accounted for 75 of the team’s total 99 yards.

In short, the offense was stagnant like it has been through the past few games.

The Illinois defense was on the field for just over 42 minutes and Wisconsin ran all over them, racking up 363 yards. But when you’re forced on the field for that long against a top-10 team, that many yards shouldn’t come as a surprise.

What will be interesting is how the Illini proceed from here. A win over next weekend’s final home opponent Iowa (6-4, 4-3) seemed possible even last week. But with the Hawkeyes’ upset over No. 2 Michigan, ending the season with another win is becoming highly unlikely.

But on a day when three major upsets occurred shaking up the College Football Playoff, this game went as well as expected.

And that’s as much Illinois could have hoped for.