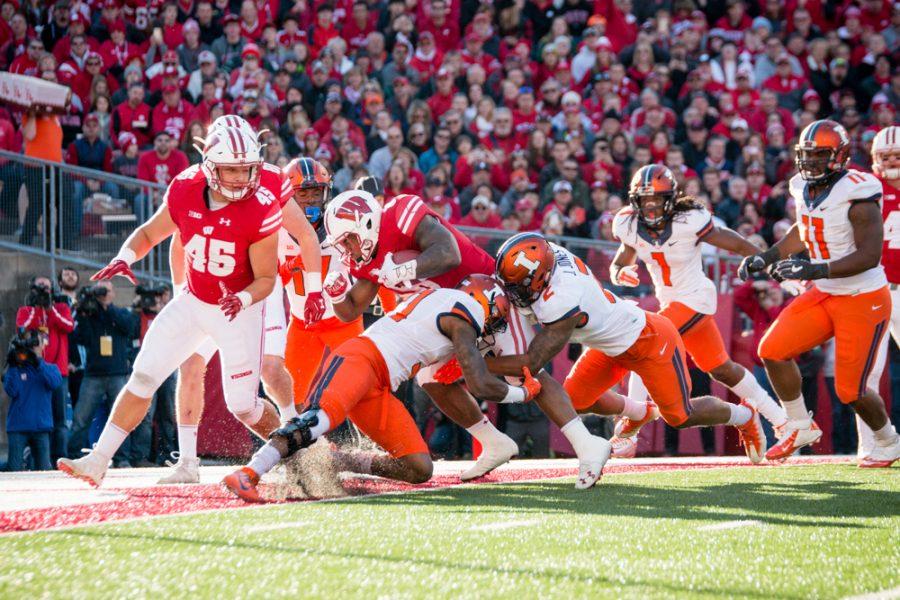 Wisconsin running back Corey Clement (6) runs through the Illinois defense for a touchdown during the first half of the game against Wisconsin at Camp Randall on Saturday.

Editor’s note: Every week, The Daily Illini football staff ranks the football teams in the Big Ten, 1-14, and compiles the lists into its own Big Ten power rankings.

1. Ohio State (2) — The Buckeyes regain the top spot in this ranking and have the chance to move into the CFB playoff picture after a week that saw three upsets of top-4 teams. J.T. Barrett compiled 300 total yards in Saturday’s 62-3 shellacking of Maryland — the Heisman candidate has now thrown for at least 220 passing yards in five consecutive contests.

2. Michigan (1) — In perhaps the largest upset of the week, the Wolverines lost their first game of the season to a middling Hawkeyes squad in dramatic fashion. Wilton Speight’s 103 passing yards were his fewest of the season in games that he finished, and the Michigan run game was up for its lowest ground total of the year.

3. Wisconsin (3) — Close losses to Ohio State and Michigan may be more legitimizing than a win over Illinois, but the win puts Wisconsin that much closer to a Big Ten West crown.

4. Penn State (4) — With the NCAA’s best in disarray, it was much more of the same for teams like Penn State. Quarterback Trace McSorley racked up 332 yards, and a pick-six sealed a victory in Indiana for Penn State’s sixth win. With games against Michigan State and Rutgers to wrap up the schedule,  that winning streak will live for the remainder of the season.

5. Nebraska (5) — Two losses followed an 8-0 start for the Cornhuskers, but they righted the ship with a victory over Minnesota over the weekend. After getting out of the game against Ohio State the week prior, Tommy Armstrong returned to put up 217 yards through the air and 61 more on the ground. Nebraska now has the fast track to the Big Ten West crown if Wisconsin suffers an upset in the next two weeks.

6. Iowa (9) — An unexpected win over Michigan made the Hawkeyes the story of the weekend. Iowa hasn’t lived up to its expectations after its stellar 2015 campaign, but can still end the season with a bowl ticket.

7. Northwestern (8) — A win over Purdue was exactly it needed after two straight competitive losses to top-10 squads. The win marked the first time since week seven that Justin Jackson eclipsed 100 yards rushing or scored a touchdown.

8. Minnesota (6) — The Golden Gophers had an opportunity to move into a tie for first place in the Big Ten West, but couldn’t capitalize in Nebraska. Mitch Leidner’s playmaking is still lacking and running back Rodney Smith was held under 100 rushing yards for the first time in five weeks.

9. Indiana (7) — The Hoosiers flexed some offensive muscle in its 45-31 loss to Penn State, but the defense couldn’t get off the field. The Hoosiers haven’t held an opponent to under 20 points since Week One, but barring a Purdue upset in the final week, they’re en route to another bowl game under Kevin Wilson.

10. Purdue (11) — The Boilermakers can put points on the board, but haven’t been able to match the offensive numbers their opponents have been amassing in recent weeks. In its past three games, Purdue has allowed 511, 466 and 605 total yards, respectively, allowing 151 total points in that span.

11. Maryland (10) — In a brutal back-to-back against Michigan and Ohio State, Maryland has been outscored by a margin of 121-6 and needs at least one more win for bowl consideration.

12. Illinois (12) — Michigan State may end up being the high point of Lovie Smith’s first year in Champaign, especially after the Illini came crashing back to Earth against Wisconsin. Amid their flaws, the Illini have been good  taking care of the ball, but four interceptions thrown by Jeff George Jr. low lighted Saturday’s 48-3 loss.

13. Michigan State (13) — The Spartans finally won a Big Ten game, and it only took a matchup with the other worst ranked team in the conference. A 49-0 throttling may have been a nice release for a Michigan State team that has been mighty frustrating this season.

14. Rutgers (14) — The number to know after another blowout loss in Chris Ash’s first year at the helm for Rutgers? Two. Just two more games until it’s all over.