Illinois’ Lunt returns to his place in the pocket 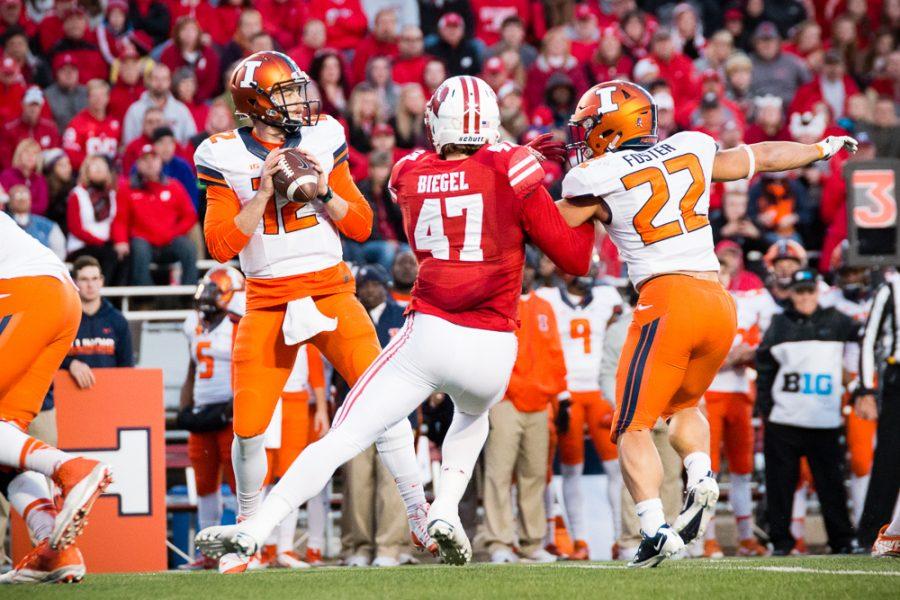 Illinois quarterback Wes Lunt (12) looks to pass the ball during the game against Wisconsin at Camp Randall on Saturday, November 12. The Illini lost 48-3.

Before the game Saturday, Illinois football Head Coach Lovie Smith announced that the only way Wes Lunt would play at quarterback was if the team absolutely needed him – in other words, if Jeff George Jr. was unable to play for any reason.

That plan changed one half and four interceptions later. George struggled his way through the first half, completing five passes and throwing four picks.

The Illini went into the locker room at halftime trailing 31-3.

When they came back out for the second half, George was no longer under center – Lunt was.

“It felt good to get back out there,” Lunt said. “It had been a while. Obviously we didn’t produce like we wanted to, but it felt good to be back on the field.”

It was the first time Lunt has played since he injured his back on Oct. 8th in the game against Purdue.

Lunt only completed two passes for 22 yards, but he was confident that he had no rust to shake off. He had been going up against a Wisconsin defense that had all the momentum in the world behind it.

Offensive Coordinator Garrick McGee said it was good to have Lunt back on the field. He agreed with his senior quarterback when he said there wasn’t much rust to shake.

“He didn’t have many problems because he has done a lot of good work at practice,” McGee said. “For the last few weeks he did a lot of work at practice. He is experienced, and he knows what is going on out there.”

Smith announced at his press conference Monday that Lunt will be starting Saturday against Iowa. It will be Lunt and the rest of the seniors’ final game at Memorial Stadium.

But with the game against Iowa approaching, Smith said he will need Lunt at his best.

On to Iowa
After Illinois got battered by Wisconsin 48-3, Smith decided that it was best to just pretend that it didn’t happen.

“Where we are right now we can’t do much about what’s happened in the past, but we can play our best ball this week. We’re going to do everything possible to see that that happens.”

Normally the Illini spend the first few days after a game watching film and studying what they did well and what they did poorly.

But Smith didn’t bother. There was nothing to learn from it.

“What film?” Smith said. “We are on to Iowa. That should really answer your questions. I didn’t really look at it. There was nothing to gain from it.”

Iowa has had drastically different performances over the past few weeks. After getting blown out by Penn State two weeks ago, they took down Michigan at home last week.

While Smith is trying to force Iowa to play like they did against Penn State, he said his team is preparing for the Iowa team from last week.

“It is on to Iowa, a very good football team,” Smith said. “If you watched the last game against Michigan you can kind of see what kind of team we’re talking about that we’re up against.”