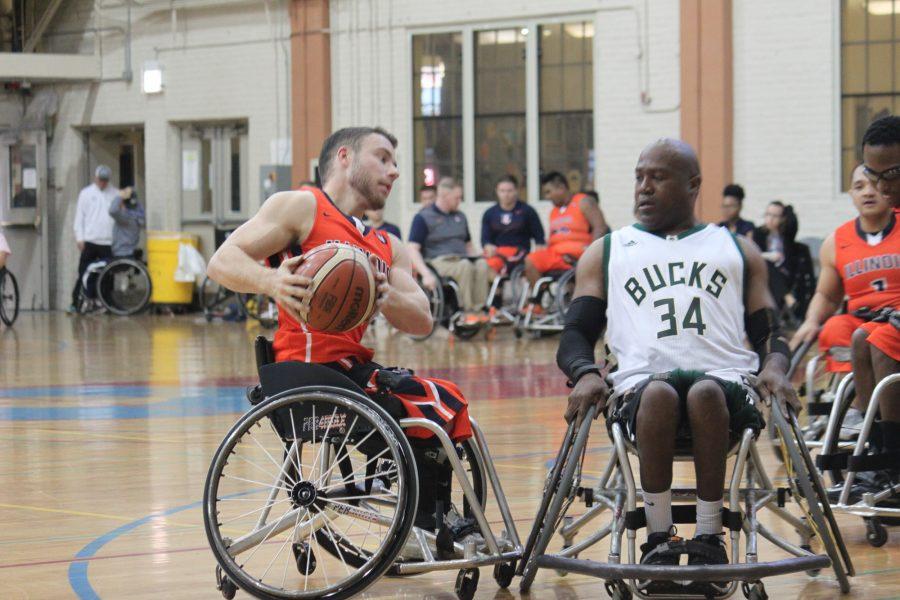 Ryan Neiswender swerves around the Milwaukee Bucks defenders. Neiswender’s sharp turns, spin moves and driving layups were on full display at the eighth annual 2nd City Showdown in Chicago from Nov. 12-13. He went on to score a team-high 15 points in the team’s 62-45 loss to the experienced Pacers in the first round of the Showdown’s tournament. ​

Seniors Ryan Neiswender and Derek Hoot can only do so much.

The pair was a dominant force for the Illinois men’s wheelchair basketball team at the eighth annual Second City Showdown in Chicago over the weekend.

Neiswender and Hoot were no match against Paralympians and players with experience at the international level, as Illinois finished in fourth place.

The Showdown consisted of three pool play games on Saturday and tournament play on Sunday. The Illini went 3-0 on the first day. Then they were matched up with the Milwaukee Bucks, which featured Illinois alum Christina Schwab, for the first round of the playoffs.

After Neiswender and Hoot scored a combined 27 points, the Bucks countered with 51 points from three-time Paralympian Rebecca Murray and two-time Paralympian Nate Hinze for the win. The Bucks used Hinze’s 6-foot-2-inch stature to shoot over the Illini.

The Illini played aggressive and tried double-teaming Hinze, but this resulted in foul trouble.

“We knew it was going to be more physical, and we were planning on bringing the physicality,” Head Coach Matt Buchi said. “It just looked like the referees weren’t expecting that.”

The loss knocked the Illini to the third-place game against the Minnesota Timberwolves. The Timberwolves handed Illinois another double-digit loss.

“You want to have the guys just play, have a good game,” Buchi said. “We needed to adapt, and we didn’t necessarily do that, but that’s what the whole point of coming to this tournament is.”

The Illini were the only team representing a university in the Showdown. The tournament mostly consisted of professional teams, including the wheelchair divisions of the Bucks, Timberwolves and Indiana Pacers. The games do not count toward Illinois’ overall collegiate record, which determines its post-season ranking.

“We know that we can push 40 minutes (of the game) at a (Division I) level and still be okay,” Buchi said. “It’s nice to go really fast paced and slow it down for the college division.”