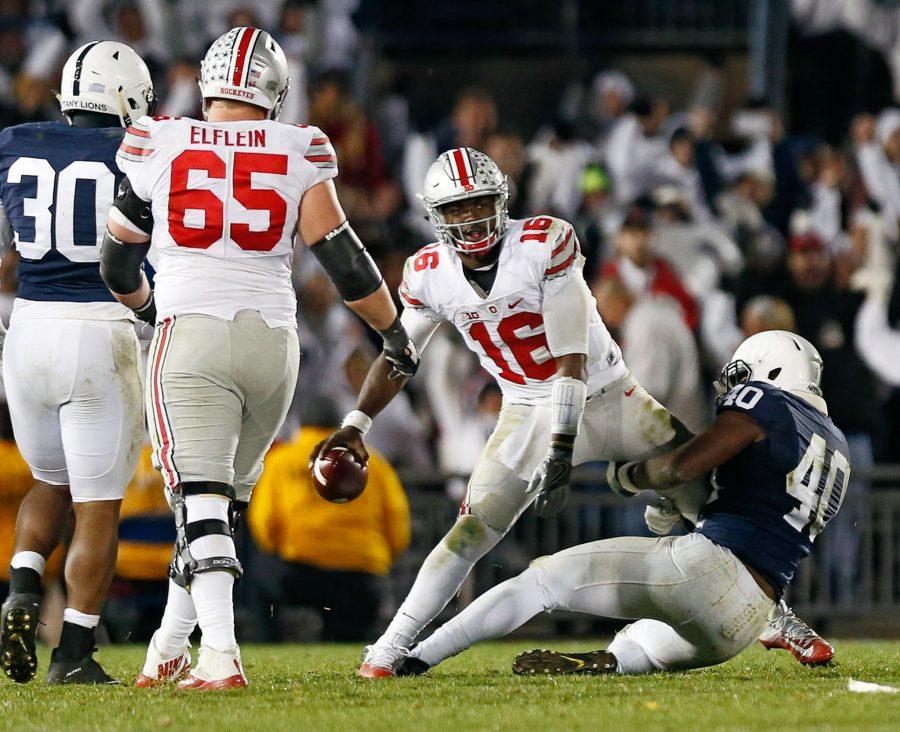 Just when a weary nation needed it most, college football delivered with its signature qualities: craziness and unpredictability.

Unprecedentedly, the second, third and fourth ranked teams (Clemson, Michigan and Washington) got their first defeats of the season, opening the door for many more playoff possibilities.

Other than Alabama — which appears to have the top spot in the College Football Playoff all but locked up, barring any late-season collapse — the other three playoff spots are nowhere close to being certain.

Despite the results of this past weekend, the Big Ten East’s top two teams — Michigan and Ohio State — are nonetheless in an ideal position to give the conference two representatives in the playoff.

With the exception of the Crimson Tide, the Buckeyes are now the hottest team in the country, following back-to-back 59-point victories over Nebraska and Maryland.

Seemingly gone are the days of two weeks ago when many were starting to panic about Ohio State after a disastrous loss to Penn State and ugly win over Northwestern.

It is clear, now that the Buckeyes have bounced back in a major way, that any such pronouncements of Ohio State’s impending playoff were just silly overreactions.

As one of the big winners of last weekend’s craziness, Ohio State’s path to the playoff is quite simple: beat Michigan State, beat Michigan and win the Big Ten championship.

Michigan’s path to the playoff, despite the last-second loss at Iowa, is still intact and equally as simple as Ohio State.

They simply have to take care of business against Indiana, go on the road and defeat an increasingly stronger and more dominant Ohio State and then emerge unscathed from a conference championship matchup.

This is simple too, right?

Except, especially for Michigan, the path to the playoff just got considerably more difficult at the most inopportune time.

Michigan’s defeat at the hands of the Iowa last weekend illustrated a number of the team’s key weaknesses.

Against a team with a stingy defense such as Iowa, Michigan had many offensive difficulties, scoring only 13 points.

These running game struggles carried over to ineffective quarterback play from Wilton Speight. Speight was 11-for-26 with 103 yards and one interception. Simply put: Michigan had its worst offensive day of the season, bringing up fears that Ohio State will follow a similar formula as did Iowa to shut down Michigan’s running game and watch the rest of the offense struggle.

Not only have weaknesses in the Wolverine’s seemingly impenetrable armor appeared, an injury to Michigan’s starting quarterback could prove their path to the playoff ever more difficult.

Speight ended up breaking his collarbone during Saturday’s game. The team announced yesterday that he would be unavailable for the upcoming game against Indiana. His availability against Ohio State and beyond is equally in doubt.

Speight’s play throughout the season has been strongly consistent, proving Jim Harbaugh’s genius decision of naming him the starting quarterback back in September.

Now, Michigan’s playoff fate lies in the arm of John O’Korn — who has only attempted 18 passes all season.

He did, though, have strong numbers when he started at Houston a few years back.

Michigan’s backup is certainly capable of going into the lion’s den that is Ohio Stadium, especially with the supporting cast around him. Still, losing a starting quarterback this late in the season certainly plays into the hands of Ohio State.

It is clear that Ohio State has a rather easier road to the playoff, though that still means getting past a tough Michigan squad.

Of course, there is still a chance for both teams to make it to the playoff. Provided that one of them loses a tightly contested game against the other, all they would need is for either Clemson, Washington and Louisville to lose once — even better if each of these three teams loses at least once before the end of the season.

In this season of increasing craziness and unpredictability, don’t consider that a wild possibility.