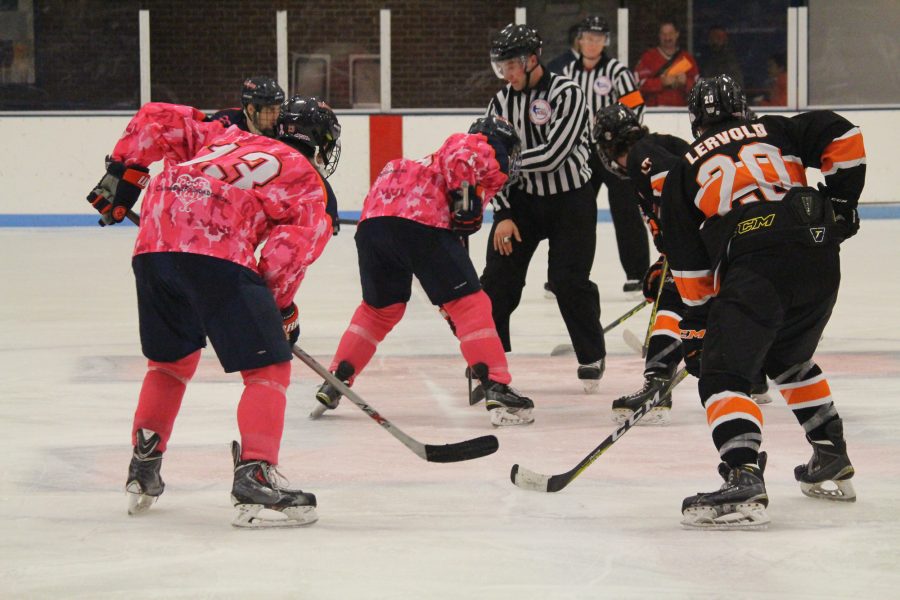 James McGing (13) lines up behind Eric Cruicshank (15) attempting to gain possession of the puck against Indiana Tech in the face-off during the third period at the Ice Arena on Friday, Oct. 14, 2016. Illini beat Indiana Tech 7-2.

The last time Illinois hockey squared up with the top-ranked team in the country, the Illini squeaked out a win.

The team upset No. 1 Lindenwood University 4-2 at the Illinois Ice Arena on Jan. 29.

This weekend, Illinois has another chance to pull off an upset when it travels to Athens, Ohio, for a pair of games against the No. 1 Ohio.

“(Ohio) is probably the best team we’ll play this year,” Illinois head coach Nick Fabbrini said. “They play tight games with everyone else in the CSCHL.”

“We had a bad ten minutes to start the game, and we played pretty well for the most part after that,” Fabbrini said about Saturday’s loss. “They didn’t give up, which I was proud of.”

Ohio (13-2-1) earned a split last weekend with No. 9 Iowa State. The Bobcats defeated the Cyclones on Friday 4-2 and lost 5-4 on Saturday. Ohio fought back from a four-goal deficit midway through Saturday’s loss.

Forward Gianni Evangelisti leads the Bobcats with 21 points and eight goals through 16 games. Fabbrini praised the playmaking abilities of Evangelisti and Ohio’s forwards.

“Not only will (Ohio) capitalize on our errors, but they have the talent to make things happen on their own,” Fabbrini said.

Freshman Jimmy Thomas will likely start in the net for the Bobcats. Thomas has posted a 9-1-0 record and has a .887 save percentage this season.

Fabbrini said he has heard positive things about the freshman goalie.

“(Ohio head coach) Sean (Hogan) is very high on him,” Fabbrini said. “He’s got a very distinguished junior career, so it will be important to get a lot of pucks on him and a lot of traffic.”

The Illini dropped a pair of games by at least two goals at Ohio’s Bird Arena last February.

“They have a good student section and a band,” Cruickshank said. “It’s a tough place to play if you’re not the home team.”

Both teams enter this weekend’s series an identical 21-84 (25 percent) on the power play. Ohio has performed better on the penalty kill than the Illini this season, sporting an 86.84 percent compared to Illinois’ 77.8 percent.

Friday’s game will be aired live on ESPN3 as part of the ACHA Game of the Week promotion. Illinois defeated Illinois State on Nov. 4 in a nationally broadcasted game in Champaign.

“We’ve played No. 1 teams in the past,” Cruickshank said. “If we stick to our game plan as playing simple and playing hard, we’ll be successful.”