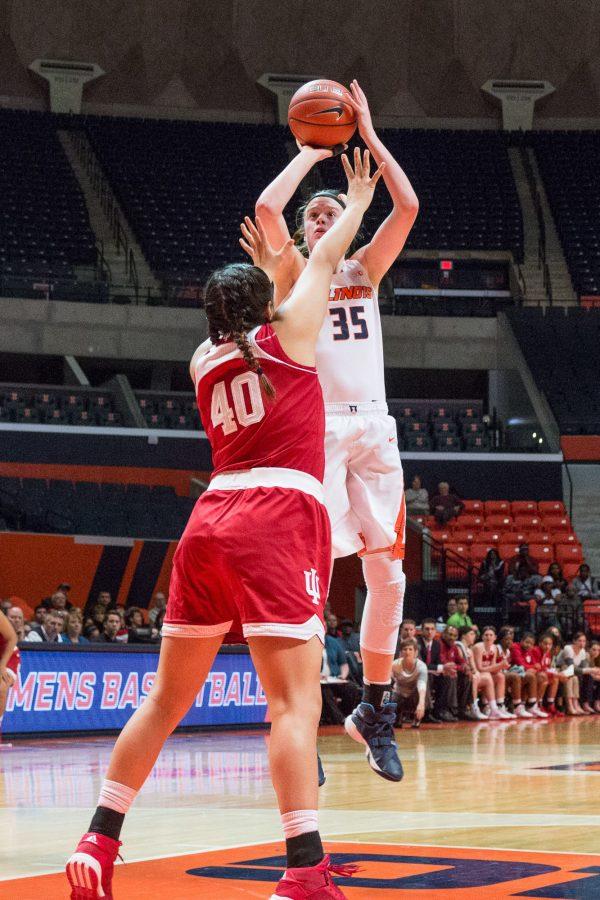 Illinois' Alex Wittinger shoots a jumper over Indiana's Lyndsay Leikem during the game against Indiana at the State Farm Center on February 10. The Illini lost 70-68.

The last time the Illinois women’s basketball team was in action, a 21-point fourth quarter powered the Illini to a season-high 70 points in its victory over the University of Arkansas-Pine Bluff.

Head coach Matt Bollant said that his team’s strong fourth quarter performance would need to continue against Memphis on Thursday at the State Farm Center.

“There’s a sense of relief in getting (the first win),” Bollant said. “We shot 58 percent in the fourth quarter. We did a good job of sharing the ball. The biggest thing is sharing it and making the extra pass.”

Bollant changed his starting lineup against the Golden Lions and gave freshman Petra Holsinska the start over sophomore Jaelyne Kirkpatrick. But after Kirkpatrick drained three three-pointers and snagged four rebounds, he said she would return to the starting lineup.

Even though Holsinka’s starting spot was short lived, the freshman mentioned ways she could improve her individual play going forward.

Thursday’s game will also serve as a reminder of her home for Memphis-native Brandi Beasley. The freshman has started in Illinois’ first two games and despite only standing at 5-foot-6, she is averaging nearly eight rebounds per game.

Beasley has shown that she has strong ball-handling skills, but turned the ball over six times against UAPB.

Illinois is 4-2 all-time against Memphis, but the last time the two teams met, the Tigers earned a six-point victory at home. In that matchup, forward Alex Wittinger shot over 50 percent but had just eight points and one rebound.

In the first two games of her sophomore season, Wittinger is averaging 19 points, 10 rebounds and two assists. Bollant has repeatedly acknowledged her as Illinois’ leader.

Even though her team had an offensive explosion in the fourth quarter against UAPB, she said that her team would need to improve on the other side of the ball against Memphis.

“I definitely think defense is a priority and rebounding as a team on defense and offensive rebounding as well,” Wittinger said. “But first defensive rebounding because that’s just so much more important. (It prevents) the other team from getting second chance shots, so I think that’s the biggest thing.”