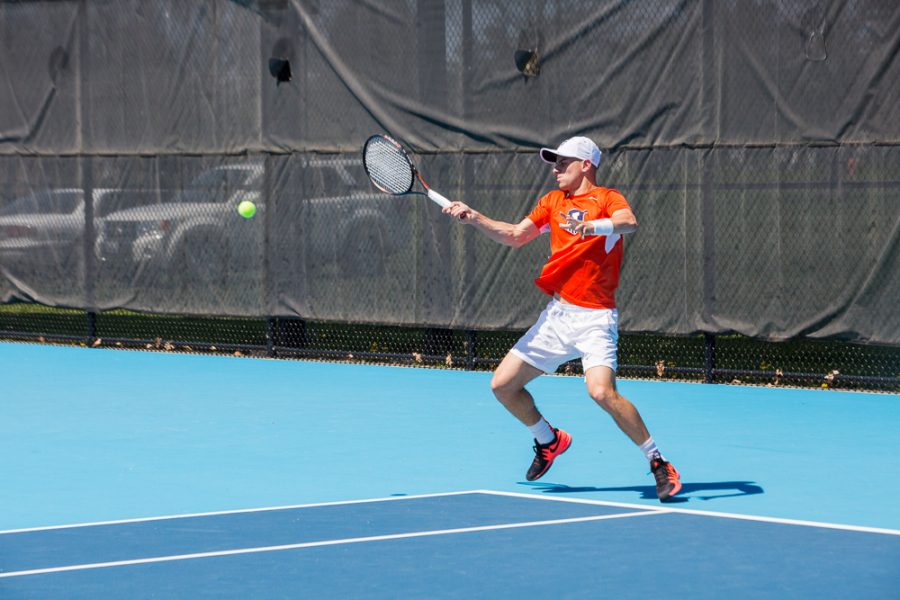 Illinois’ Aron Hiltzik attempts to return the ball during the meet against No. 21 Michigan at the Atkins Tennis Center on April 17, 2016. The Illini won 4-1.

Illinois’ Aron Hiltzik has always been a talented tennis player, but in order to reach where he is now, something had to change: his mindset.

“I’ve been using a bit of a motivator from MMA fighters,” Hiltzik said. “They have such a high level of discipline. I’ve geared that toward my tennis mentality and it’s worked well; it’s really changing me.”

Despite all of his success in past seasons, changing his mindset has payed off for Hiltzik and the Illini so far. Head coach Brad Dancer said that it has made a noticeable difference.

“No question in my mind that the number one goal is to get better and (Hiltzik) will be one of the best players in college tennis,” Dancer said. “To be an elite player you have to compete at a consistent basis. First you take it one step at a time and to do that you have to get in the NCAA tournament.”

As Hiltzik moves into a new season, his goal of going to the NCAA tournament in the spring fuels his new mentality.

Dancer has said that Hiltzik improved individually, but that his leadership skills have also improved.

“I’m sure he misses Jared, they had a very close relationship,” Dancer said. “It’s hard to pinpoint, but there is a vacated space and I think Aron is becoming more comfortable moving into that space and leading.”

Although the brothers have crossed paths at tournaments this fall, Aron has fine-tuned his competition. Making adjustments to his fall tournament schedule is also an adjustment that has lead to success.

“I’m focused on growing as a player and strictly hard work and what hard work can play off for,” Hiltzik said.

This fall, Aron has made appearances at the Champaign Challenger, ITA Regional Tournament, USTA Charlottesville Men’s Pro Challenger and snatched a runner-up title at the USTA Futures Tournament in Houston.

Dancer was also a big component in helping to restructure Aron’s schedule, and he thinks that the results have been beneficial.

Most recently, Aron didn’t win a title at Illinois’ Champaign Challenger on Nov. 15, but redeemed himself by qualifying in the Columbus Singles Championships in Columbus, Ohio.

Pushing through defeat is one way Aron is staying disciplined and fueling his success.

“He’s got an interesting mindset,” Dancer said. “When he played his last round in the Challenger, it was interesting match for him. He had a good tournament, but wasn’t playing how he needs to play.”

Hiltzik was defeated in the single main draw at the Champaign Challenger, but bounced back the next week in Columbus.

“Going to Columbus was a great rebound for Aron and showed how well he could collect himself and get dialed back in,” Dancer said.

Hiltzik’s mental toughness has not only sparked a strong desire to succeed, but has allowed him to step into a larger leadership role on the team.

“It was kind of my time to take over the team and be the leader, (my brother) was always a great role model,” Aron said.