Lunt may be graduating from Illinois, but he knows he can always come home 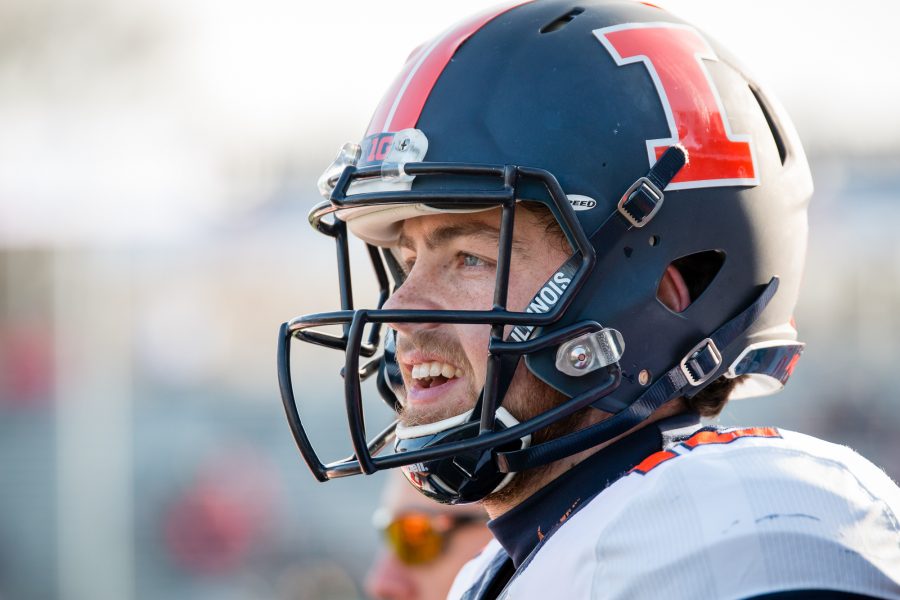 Illinois quarterback Wes Lunt (12) watches from the sidelines during the game against Northwestern at Ryan Field on Saturday, November 26. The Illini lost 42-21.

The first time Wes Lunt played football at Memorial Stadium was during his junior year of high school.

He stepped off the bus with his fellow Rochester Rockets and walked into a stadium he had been to countless times as a fan, but never as a player.

That was the start of a long, crazy ride for Lunt in Memorial Stadium.

He started his college career at Oklahoma State before transferring after his freshman season to Illinois — a place where he was both familiar and comfortable.

“I came back here for the reason of home,” Lunt said. “I came to a lot of games when I was a kid.”

At the time, Lunt’s experiences at Memorial Stadium had been overwhelmingly positive. As a fan, he got to watch Illinois teams, like the 2008 Rose Bowl squad, dominate.

As a player, he drove the Rockets’ offense up and down Zuppke Field on their way to two straight state titles.

But, his career in an Illini uniform did not follow the path he was expecting.

“There has been so much adversity,” Lunt said. “My career has been crazy honestly, but I wouldn’t trade it for anything.”

The Illinois football program went through a tumultuous period during Lunt’s time.

His senior season was building to be a special one after the Illini hired Lovie Smith as head coach. Lunt and the Illini finally had some stability.

Then he got hurt and spent half of the season on the sidelines.

The Illini finished with a 3-9 record, and Lunt completed his collegiate career.

Despite all of the turnover and problems with the program through his career, Lunt is still one of the best quarterbacks in Illini history.

But as the face of the program, he took a lot of criticism.

“Wes has been through the ringer,” offensive lineman Joe Spencer said. “And that is the nature of the quarterback. People don’t always look at me when I play bad, but he never caught a break. You talk about a guy being strong through it all, and being a leader through it all. I give so much credit to Wes Lunt. He is one of the greats.”

Lunt has been seen as a potential NFL quarterback ever since he came to Illinois, and his resume at Oklahoma State was more than enough to warrant the talk.

He was the first true freshman to start a season-opener at quarterback for the Cowboys since 1950. In just six games, he threw for 1,108 yards and six touchdowns.

Illinois offensive coordinator Garrick McGee knew what he was getting into with Lunt as a player when he joined the coaching staff last spring, but Lunt’s aspirations later in life caught him off guard.

“I didn’t realize that he was going to end up being the athletic director here at some point,” McGee said with a laugh. “I didn’t know that part. But I think that once Josh (Whitman) retires years from now, Wes will take over, or Wes will be on Josh’s staff.”

Lunt has been wanting to be an athletic director for some time now. He is currently pursuing his Master’s Degree in Sports Management.

After being in the front row as coach after coach got fired from Illinois, he said he likes the stability that comes with that job compared to being a head coach — a postion that doesn’t appeal to Lunt as much.

“I ask him all the time if he wants to coach,” McGee said. “He always says ‘No, I want to be up in the press box during games.’”

Lunt’s rollercoaster career has taught him to take things one step at a time and never look too far ahead.

Even the week before the last game of the season against Northwestern, after Illinois had already been eliminated from bowl contention, all he could talk about were the Wildcats.

He said he’d think about the other stuff later, and has stuck with that statement.

After playing all the way through high school and most of college together, the two played their last game together in the loss to Northwestern.

Grant may not know what Lunt will do next, but he believes that it honestly won’t matter what he decides to do.

“Whatever it is, if he does decide to train, I know he will tear it up,” Grant said.

No matter where Lunt goes next, he knows that he can always come back to his home.

He will always be able to walk into the stadium just as he did all through college, and just like he did during his junior year of high school.

“I feel like even if it is a completely different staff I would always feel welcome, just from the administration over there,” Lunt said. “It is bigger than just the coaches. Just the camaraderie of the University of Illinois, and just being a student and a graduate of here will always make me feel welcome.”