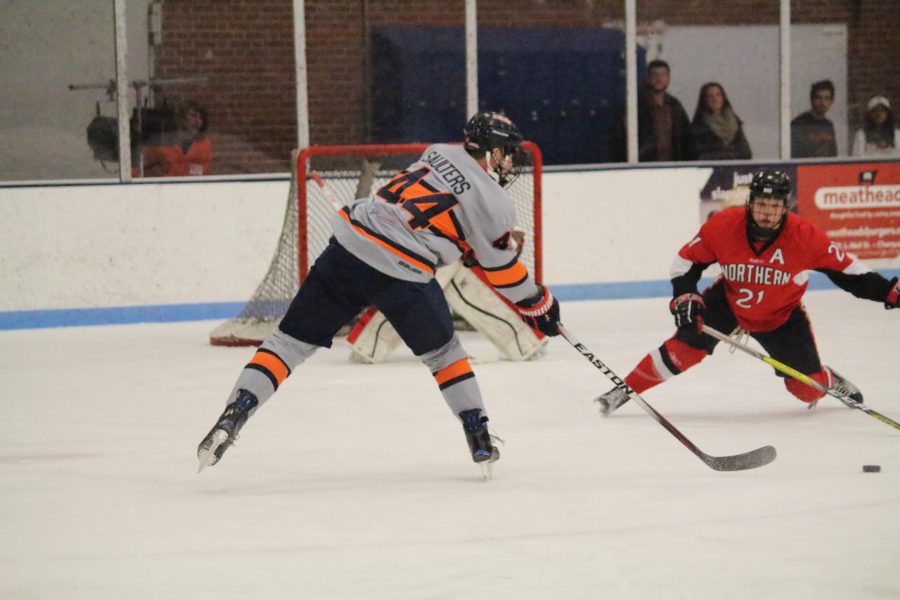 Eric Saulters (44) reaches for the puck to try and score against Northern Illinois at the Ice Arena on Friday, Dec. 2, 2016. Illini beat Northern 5-4.

Summary: For the second straight night NIU stayed with the Illini early, but Illinois’ offense proved too much for NIU goalie JoJo Durrbeck in the 9-4 win.

Quote of the Game: “Winning is the most fun you can have as a hockey team.” – Illinois head coach Nick Fabbrini

Up Next: A weekend exhibition set with USPHL’s Chicago Cougars starting on Dec. 9.

Illinois hockey forward Eric Saulters lunged towards a Northern Illinois player as the clock expired of the second period Saturday night. A referee restrained Saulters, who had three goals during the weekend series, and he began the third period in the penalty box with Illini center Stephen Quinn.

Saulters turned to Quinn, who was still serving a two-minute minor penalty, and explained how he did not know why he was in the sin bin since no official penalty was on the scoreboard.

“I just felt like hanging out in there,” Saulters chuckled.

The Illini had to find ways to amuse themselves on Saturday night as they rolled past the Division II Huskies, 9-4, completing the weekend sweep after a 5-4 victory Friday.

“Winning is the most fun you can have as a hockey team,” Illinois head coach Nick Fabbrini said. “Games like this are good to build confidence and continue to work on the things that we need to work on.”

Senior forward Austin Zima opened the scoring for the Illini seven minutes into the first period. NIU freshman forward Nick Gulli answered with one of his three goals on the night less than a minute later.

Illinois (12-5-3) finished the night with nine goals on NIU goalie JoJo Durrbeck after scoring only five goals on Friday.

Fabbrini said he was more pleased with the simplicity of the Illini’s offense in attacking Durrbeck.

“We did a better job of getting traffic in front of [Durrbeck] tonight,” Fabbrini said. “(Friday) we got a lot of shots, but I thought he saw a lot of them. We talked about getting bodies in front of him tonight, and I think we did a much better job.”

Quinn said the confidence is building with Illinois’ freshmen as the team heads to the second semester.

“The boys are just trusting in the system,” Quinn said. “Coach [Fabbrini] has been honest with us all year, and we’re finally just starting to believe in him, and it’s starting to click at the right time.”

This weekend also marked the second annual teddy bear toss for Illinois hockey. Traditionally, fans bring teddy bears to the arena to be donated to children’s hospitals and throw them on the ice after the first goal.

“It’s really special,” Fabbrini said of the teddy bear toss. “The community here makes playing here so special and any chance we have to give back we try to make the most of it.”

With two exhibition games next weekend against the U.S. Premier Hockey League’s Chicago Cougars, the Illini basically head toward their winter break following the weekend sweep. Fabbrini plans to start goalie Ross Lipic in Friday’s meeting with the Cougars, which will be the freshman’s debut.