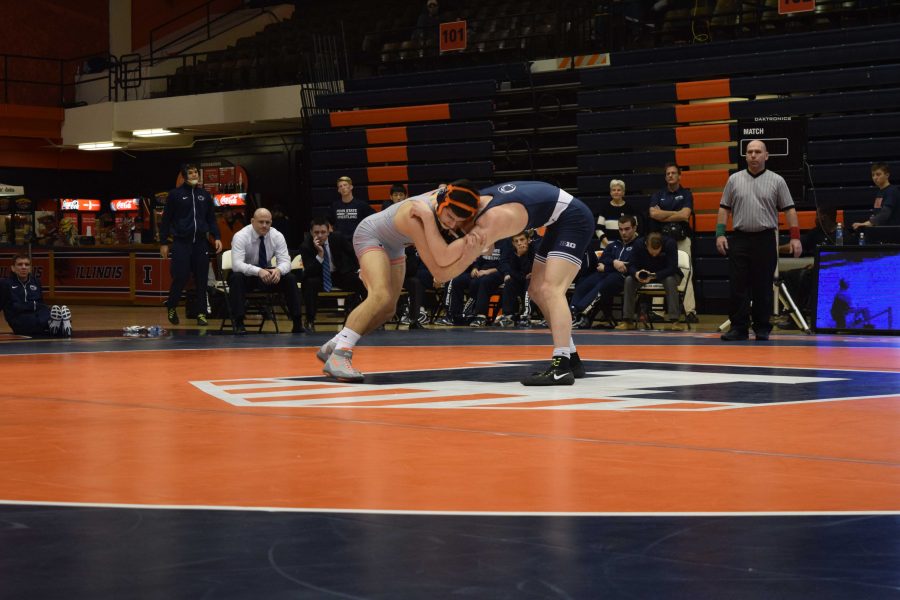 Illinois’ Isaiah Martinez getting a hold over Penn State’s Jason Nolf during the wrestling match vs. Penn State at Huff Hall on Saturday January 23, 2016.

The Illinois wrestling team did not go home empty-handed at the Northern Iowa Open.

The highlight was Isaiah Martinez who made his debut at 165 pounds. Martinez had won two consecutive titles at 157 pounds — only losing one match in the last two two years. Martinez showed that he deserved to be ranked as the top wrestler in his weight class by taking out Missouri’s No. 3 nationally-ranked Daniel Lewis.

Brooks Black also started off his season on a high-note. Black is one of the six Big Ten wrestlers ranked in the top-ten of heavyweights in the country. Black beat Ryan Streifel of Minnesota for the title. Minnesota did not send out Michael Kroells who is currently ranked eighth in the country by InterMat.

Kroells and Black are familiar opponents, as Kroells has eliminated Black from the NCAA tournament two years in a row.

At 184 pounds, Illinois’ Emery Parker was able to dominate his opposition with two tech falls and two pins. Parker is starting this season after temporarily filling in for Zac Brunson at 174 pounds last season.

Zac Brunson — ranked ninth in the country by InterMat — lost a high scoring decision to Taylor Lujan of Northern Iowa. Lujan edged Brunson 13-10 to take the title and upset one of the highest ranked wrestlers at 174 pounds.

Brock Ervin returns after being injured for a large portion of last season. Ervin lost to Max Thomsen in the final match of the tournament.

Both Travis Piotrowski and Dylan Duncan wrestled unattached for the team and made it to title matches at 125 pounds and 133 pounds, respectively.

A total of 17 wrestlers competed for Illinois between its attached and unattached wrestlers.

The team will travel to SIUE next to for its first dual meet of the season.