Behind the voice: Gene Honda looks back to the start 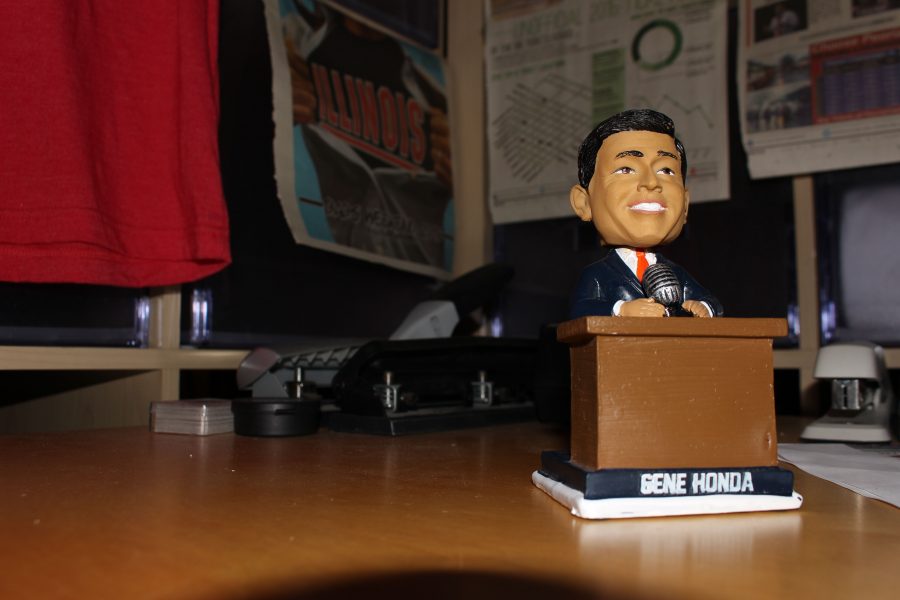 Gene Honda came to the University to be an engineer in 1972, but when he left Champaign years later, his path was set: broadcasting.

His dad suggested he learn to speak in public, and Honda found the best way possible in the summer of 1975.

“I’m sure he meant take a speech class,” Honda said. “Instead, his knucklehead son goes and wanders into a radio station.”

That was when he wandered into WPGU, a unit of the Illini Media Company, and after that, Honda found his own voice in the booth and made it his career.

He was recently honored for his work by the National Bobblehead Hall of Fame and Museum with a bobblehead of himself.

Honda bounced from engineering to finance to the radio  in 1975, but he never graduated from the University. Instead, he was offered a position at the local radio station and figured he could finish his degree in his spare time.

But that didn’t happen and he stayed in Champaign for 12 years.

While working at a radio station in Chicago, Honda was offered to be the public address announcer for the White Sox in 1985. He had to give it up after one season because the station moved his shift to the afternoon, which made his side job of broadcasting baseball games impossible.

But in 1990, Honda was in a management position at the radio station when the White Sox called again. He took the job and has been with the team ever since, working 2,153 games.

“Since I started in engineering, I’m still OK at math, and I keep trying to blow those numbers up so that there’s no way in hell that I’ve worked there that long,” Honda said. “Absolutely no way. But those numbers tell you absolutely, ‘I’m sorry. You’re old.’ OK, I guess I am.”

Since starting with the White Sox, Honda has become the voice of many sports teams and events, including the Chicago Blackhawks, DePaul basketball, Big Ten tournament, NCAA Final Four, Maui Invitational and Illinois football, among others.

Phil Sklar, co-founder and CEO of the National Bobblehead Hall of Fame and Museum, said he came across an article with a detailed biography of Honda. Sklar had been to the Final Four and the Hawks before, so he put things together.

So Sklar reached out to Honda about a year ago through the Blackhawks to get the process going. Once legal matters were taken care of and trademark issues were put aside, the rest was simple.

The talking bobbleheads feature Honda sitting at his announcer’s desk with three talkable phrases. They are individually numbered to 500 and Sklar said that about 125 have been sold so far, with each retailing for $25 plus shipping.

But Honda decided to donate his entire portion of the proceeds ($2 of each bobblehead sold) to Illini Media.

Sklar said Honda wasn’t interested in using the bobbleheads as an income source for himself, but rather making sure it was used as a fundraiser opportunity.

“If it weren’t for WPGU, the reward for having a place to not just start, but to learn, there’s no way that I’m doing anything that I’m doing now,” Honda said.

Sklar said that while his company offers the option to donate proceeds, it’s rare that people take him up on the offer. He said that Dick Vitale recently had a bobblehead made of himself and chose to donate to the V Foundation for Cancer Research.

“A person like Gene or Dick, who sees that as an opportunity to really make a difference and not profit from it, but help use their celebrity (status) to help a cause they feel is important, that’s a great thing,” Sklar said.

Honda has continued to give back in many ways, including working with Chicago’s After School Matters program.

Crediting WPGU to the people he worked with who gave him advice and the experiences he had, Honda can’t look back on his career without it.

“You can take a class, get a good grade, but getting the hands-on experience that WPGU offered combined with class work was invaluable,” Honda said.

And he tells this to students now: Unless you get on air-experience, it’s useless.

He’s taken a similar philosophy to what his father taught him: conquering a fear of public speaking. He said that no matter what career a person pursues, they will always have to speak in front of a group.

And he still remembers that first time broadcasting for the White Sox.

“It was terrifying and it still is, even 30 plus years later,” Honda said. “And I hope it never stops, because I think if you’re not a little bit scared, then you don’t care. And that little touch of fear can be fun to play with. It keeps you honest, it keeps you sharp, and in some ways, it keeps you prepared. I get worried when I’m not a little scared when I sit in the chair.”