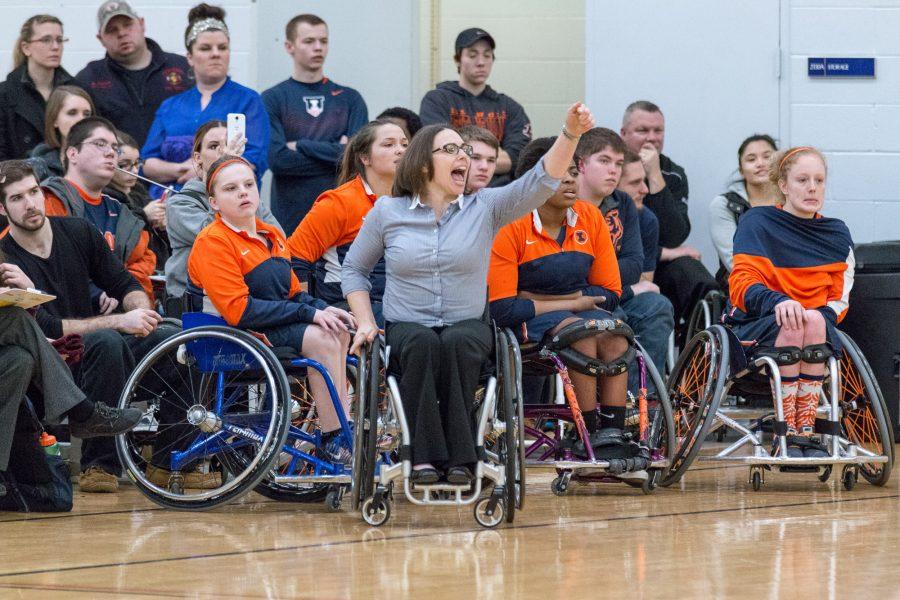 Illinois head coach Stephanie Wheeler shouts instructions to her team during the game against Alabama at the Activities and Recreation Center on February 12. The Illini won 56-47.

Chelsea McClammer won three medals at the Rio 2016 Paralympic Games in racing. But outside of that, she was focused on a different para-sport: wheelchair basketball.

Throughout the Paralympics, she was watching Illinois alums Megan Blunk and Gail Gaeng on the U.S. women’s wheelchair basketball team, which went on to win a gold medal.

“I was just so excited about it,” McClammer, who took the fall semester off  for the Paralympics, said. “It really made me miss the sport.”

McClammer played on the Illinois women’s wheelchair basketball team her first two years at the University. She last played on the team in the 2014-15 season alongside current players Kaitlyn Eaton, Christina Young and Curran Brown, while also still competing on the wheelchair track team.

She said it was challenging to simultaneously compete on two para-sports, but watching her former coach — Stephanie Wheeler — and teammates in Rio motivated her to return to wheelchair basketball.

“It’s a great program,” McClammer said. “I missed the coaching — Steph has a great coaching style — and basketball practice. It’s a challenge, but it’s also a lot of fun.”

McClammer is joining a struggling 6-3 Illini team that went 2-3 and 4-0 in its first two tournaments, respectively.

“Since I haven’t been practicing basketball consistently like everyone on the team, I’m going to work on my shooting and my chair skills,” McClammer said. “Honestly, I think all of it’s going to be hard.”

McClammer will return to campus Jan. 2 and officially join the team the next day for Illinois’ two-a-day practices.

She said she feels confident she will be able to manage her schedule.

McClammer said wheelchair basketball workouts will be one of the most challenging aspects to adjust to. She said they are more “skills-focused” than those of wheelchair track, which are concentrated mostly on shoulder and back muscles.

“She’s a track athlete,” Wheeler said of McClammer. “She’s really fit and (has) a lot of speed and quickness.”

In addition to McClammer, Janet Scanlon will be joining the Illini for the spring semester.

Wheeler said Scanlon will add some much-needed height to the team. Freshman starter Erica Wilson, an average-sized wheelchair basketball player, served as a big on the shorthanded Illinois roster.

“It’ll be different to have so many girls,” Eaton, an upperclassman and one of the team’s leaders, said. “I personally think they’re going to fit right in.”

McClammer may miss one weekend of wheelchair basketball to compete for the wheelchair track team, but she is looking forward to her basketball return.

“I love team sports, and that’s something I miss out on track,” she said. “I’m excited to work with them and hopefully get that national championship.”