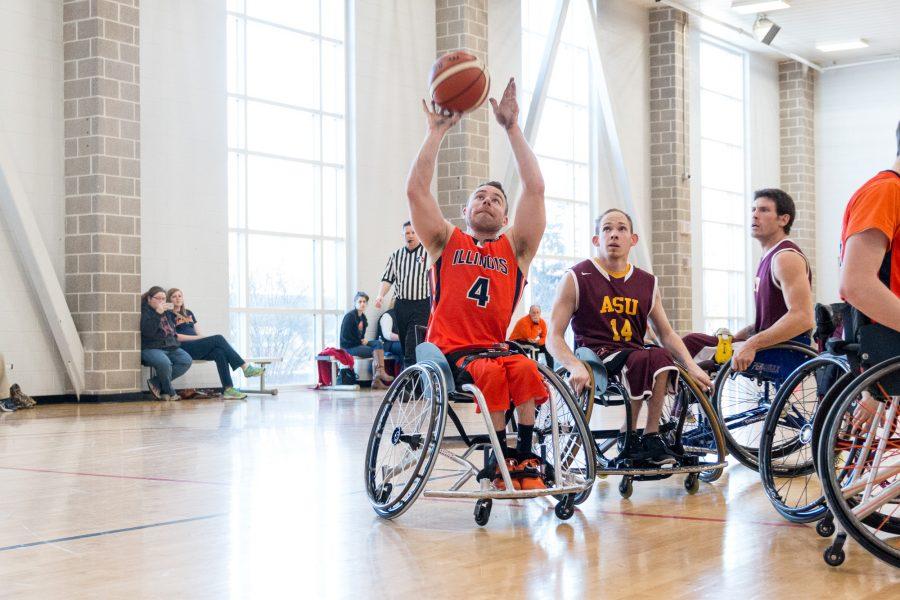 Illinois’ Ryan Neiswender takes a shot during the game against Arizona State University at the Activities and Recreation Center on February 13. The Illini won 69-43.

With senior Ryan Neiswender on the court, the Illinois men’s wheelchair basketball is full of aggression.

When Neiswender is not driving to the rim, he will habitually roll to the left or right wing to set up a pick and roll with junior Spencer Heslop. The play often leads to an assist to Heslop on an open close jumper or layup.

“It’s two-fold because Ryan and Spencer work well together, and all the teams we’ve played against know that those two work well together,” head coach Matt Buchi said. “A lot of the defense gets brought over to their side and puts a lot of pressure on them, so it actually alleviates a lot of open space.”

Heslop and Neiswender averaged a combined 32.4 points at the team’s five games at Wisconsin-Whitewater Nov. 19-20. In the last game of the trip, Neiswender added 10 assists.

“I practice for that,” Neiswender said. “I train for that. That’s what I want. I want the ball in my hands.”

Neiswender has helped lead the Illini to an 8-6 record on the season. They came off a slow 1-3 start at Southwestern Minnesota State University Oct. 21-22, followed by a 3-2 performance at the Second City Showdown in Chicago and a 4-1 outing at Whitewater during Thanksgiving break.

Outside of the double threat from Heslop and Neiswender, Illinois is still trying to solidify its lineup, including its post players.

“In the past, we’ve been a pretty decent shooting team, but we haven’t done much work of getting our bigs (inside) and getting those two-foot shots with some physicality,” Buchi said.

In a couple games at Whitewater, Buchi swapped one of his bigs in the starting lineup for a shorter player, such as Patrick Tomic or Tim Nagel, who can play every position.

“It’s just a team effort,” Neiswender said. “We prepare for those situations day in and day out.”