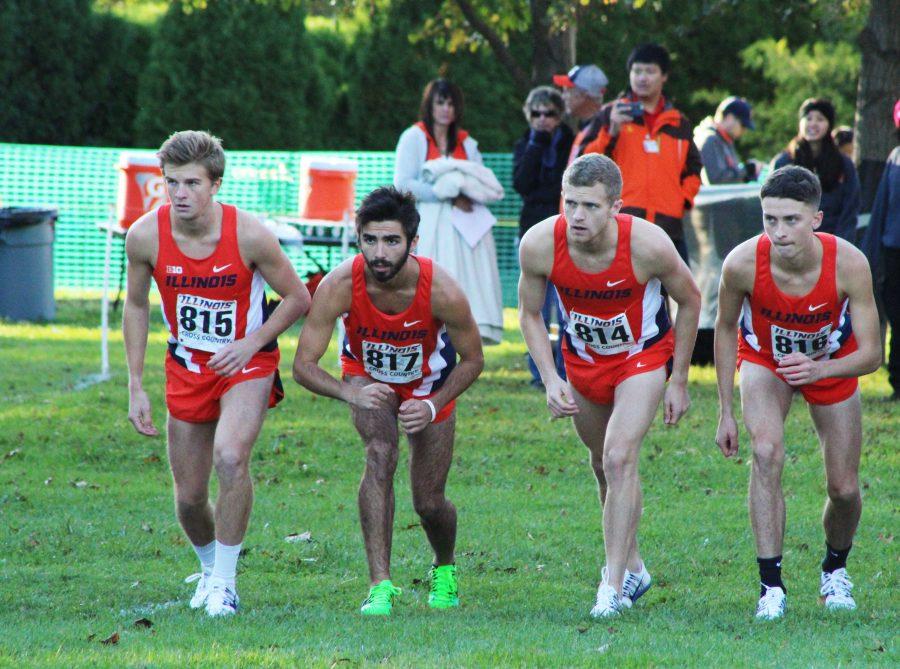 Lining up before the race begins, runners Joe Crowlin, Garrett Lee, Luke Brahm, and Caleb Hummer stand ready to run the Illini Open at the Arboretum on Oct. 21, 2016.

The Illinois men’s cross country team rebounded from a mid-season slump by having the best season finish in the past 30 years.

The Illini started off their season with smaller meets consisting of four to nine teams, including the Hawkeye Invitational and the Bluegrass Invite.

Toward the end of the regular season, Illinois faced its biggest competition at the Ed Nuttycombe Invite in Madison, Wisconsin, finishing 27th out of 30 teams.

Head coach Jake Stewart said the team was displeased with its performance at the meet, catapulting itself into the Big Ten Championships with something to prove.

Placing sixth out of 12 teams in the Big Ten was one of the low points for the Illini.

The highlight of the season was placing third at the Regional Championships in Iowa City, Iowa. The Illini had to sit and wait for the official announcement on whether they had received the at-large bid for the NCAA Championships in Terre Haute, Indiana.

“Coach told us to take 24 hours to celebrate, but we have to reengage because the job’s not done,” said senior Dylan Lafond. “Our main goal wasn’t to make it there — even though that was huge for us — our goal is to go out there and beat some teams.”

Heading to the championship, Stewart told his team to relax.

“In the back of our minds, this is what we’ve been training for throughout the course of the entire year,” Stewart said.

The Illini ended up placing 23rd out of 31 teams in Indiana with Lafond being the top Illinois finish in 56th place.

All of the cross country runners will be returning to run indoor and outdoor track.

“There is a lot of momentum from this fall that will really get things done on the track — indoors and outdoors,” Stewart said.

The indoor season starts Jan. 7 with the Border Battle, a dual meet against the Iowa Hawkeyes.