Illini look to the future after a lackluster 3-9 season 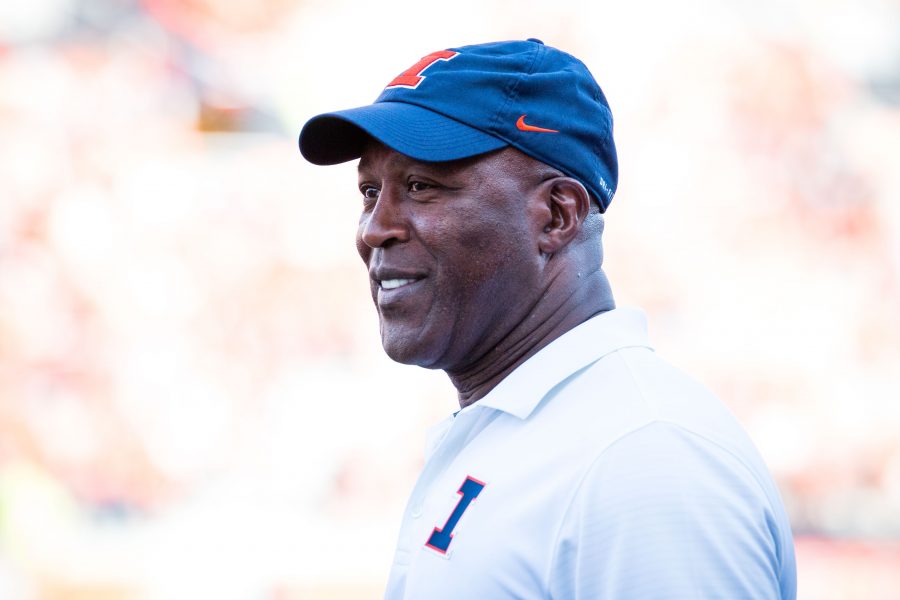 The 2016 season was bookended by exciting arrivals and emotional farewells for the Illinois football team. It was a year of passage that will likely be remembered for its behind-the-scenes transitions rather than what occurred on the field.

Of course, the main story was Lovie Smith’s grand upheaval of a program that was in need of a fresh start. Smith put together an experienced, star-studded staff to usher in a new era of Illinois football, and although they didn’t enjoy immediate success, the blueprint has been laid for the future.

“We’ll have our day,” Smith said after the final game against Northwestern.

The Illini scraped together a 3-9 record with two wins in the Big Ten. The season began on a promising note with a blowout win over Murray State in front of the largest Memorial Stadium crowd in years.

Excitement peaked in Week Two when over 60,000 fans flocked to Memorial Stadium to see Illinois host North Carolina. Those fans went home with the disappointment of an Illini loss, but were also able to see perhaps the high point of the entire season — a go-ahead 65-yard touchdown run by Keshawn Vaughn that resulted in the loudest crowd eruption in years.

Unfortunately, it was downhill from that moment on. Illinois lost four consecutive games after its season-opening win and would only notch wins over Rutgers and Michigan State from there on out.

Many faults can be pointed to on a nine-loss team, but perhaps the Illini’s largest weakness was their inability to move the ball. They were dead last in the Big Ten in first downs and 126th in the nation. They were also second-to-last in the nation in third down conversion rate.

Much of the offense’s struggles stemmed from the quarterback rotation that occurred when senior play-caller Wes Lunt hurt his back midway through the season. The inexperienced Chayce Crouch and Jeff George showed, but the reps they gained could prove to be valuable moving forward.

The offense also found unexpected contributors in running backs Kendrick Foster and Reggie Corbin, who vaulted Vaughn on the depth chart and combined for 1,243 rushing yards and 11 touchdowns.

As the season wore on, a youth movement took over on both sides of the ball, and defensive underclassmen began to shine. The freshman safety duo of Patrick Nelson and Stanley Green saw ample time in the secondary and finished third and fourth on the team in tackles, respectively. Sophomore Tre Watson tallied a career-high 102 tackles and was named Big Ten Defensive Player of the Week following the Michigan State win.

“It’s good to see the people that we came in with and the younger class go out there and just play and leave it all out there,” Corbin said. “They’re playing hard and I’m proud of them.”

Despite emerging contributors, the stars of the defense were senior edge rushers Dawaune Smoot and Carroll Phillips, who were named to third and first team all-Big Ten, respectively.

Smoot and Phillips will likely be in the NFL next season, while other seniors like Lunt and offensive lineman Joe Spencer also have next-level aspirations.

As one of the few players to have been recruited by Ron Zook and then go through three more head coaches during his tenure, Spencer saw it all during his time in Champaign and was noticeably emotional in his final weeks as an Illini.On his way out, Spencer is confident in the foundation being laid by Smith and company.

“We’re going to have stability,” Spencer said. “That’s the most encouraging thing for me. They won’t be getting that weird call the day before spring practice or the day before camp. Unfortunately, I went though both of those, and that’s life, but the stability of this program going forward is very exciting.”