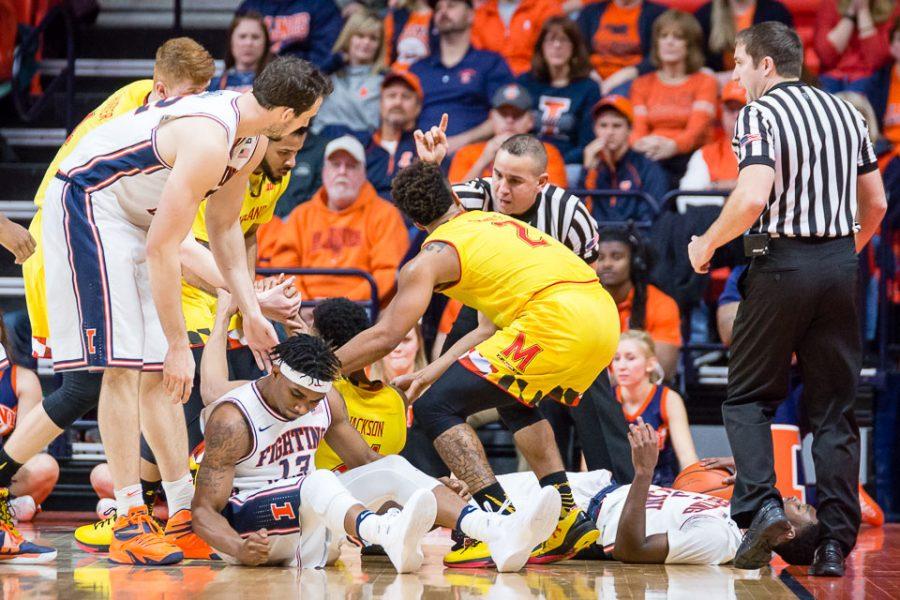 Illinois' Tracy Abrams hits the floor in anger after picking up his third foul during the game against Maryland at State Farm Center on Jan. 14. The Illini lost 62-56. Columnist Matt Gertsmeier believes Illinois' loss-win pattern is promising for the team's next matchup.

Despite a strong first half, the Illinois men’s basketball team couldn’t finish its performance, losing 62-56 to Maryland behind dismal second half shooting at State Farm Center on Saturday.

The Terrapins (16-2, 4-1) won the previous matchup this season against the Illini at College Park, Maryland.

But Illinois (12-6, 2-3) looked like a different version of itself during the first half compared to the last time the two teams faced off. However, the team took similar form to its old self in the second half.

“The first 25 minutes was the best I thought we defended against a team of that caliber,” Illinois head coach John Groce said.

But it was redshirt freshman Kipper Nichols and freshman Te’Jon Lucas who played a large role in Wednesday’s win. This game, the two played a combined 31 minutes, but only Lucas scored with two.

There was sloppy play on both sides of the court. The Terrapins turned the ball over nine times within the first half, but the Illini were close behind with seven turnovers. Both teams finished with 12 turnovers.

Maryland closed out the first half with four straight after two free throws and a steal that led to a layup from Melo Trimble and a 32-27 Illinois lead to end the half.

“We were totally out of synch,” Maryland head coach Mark Turgeon said. “I just kept telling the guys to half in there and get within four. We felt really good going into the half.”

The Terrapins found their rhythm in the second half, making three-of-four 3FG attempts to cut the lead to 43-42 with 12:27 left. Maryland took the lead soon after and never gave it back.

Midway through the second half, the Terrapins went on a run to take the lead for the first time since the 14:51 mark of the first half. Illinois finally scored after a nearly eight-minute drought.

“Shots that we had open, we just didn’t seem to knock down, and they took advantage of it,” Hill said.

“Our offensive struggles affected the defense,”Groce added on the run. “I just expect more.”