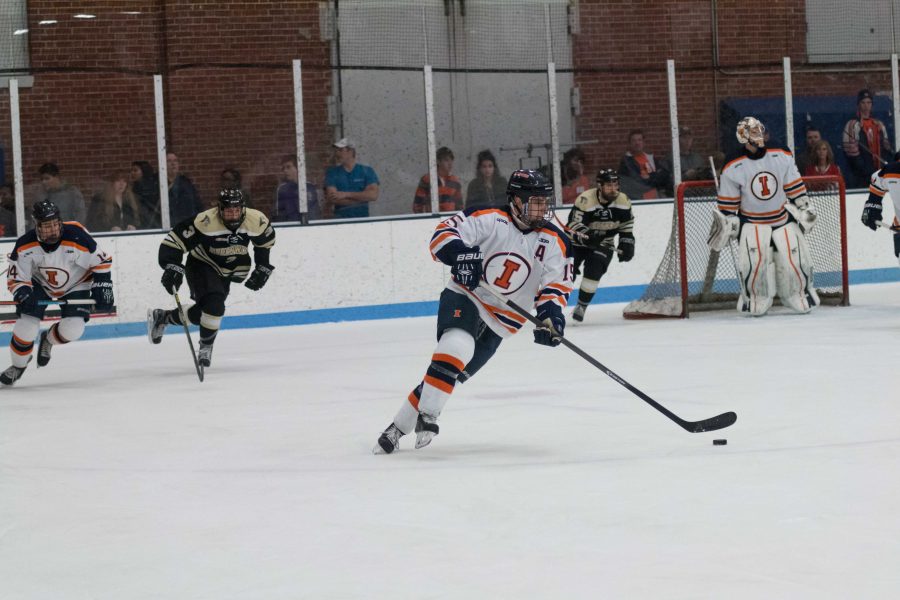 Quote of the Game: “We’re a tough team to beat and we proved that the last three games.”- Eric Cruickshank

Junior center Eric Cruickshank was only able to describe Heflin’s performance with one word: swagger.

“He’s sucking up pucks when they’re coming in,” Cruickshank said. “He’s playing with some swag in his game. He has swagger.”

“(Heflin’s) been playing so confidently lately,” Cruickshank said. “He’s making it look easy. It doesn’t look like he’s struggling to make these saves.”

It wasn’t just Heflin leading the Illini to a pair of wins and six CSCHL points in the standings.

Illinois’ special teams units were clicking during Friday’s 4-1 victory. The Illini tallied two power play goals and a short-handed goal in the win.

“They were very opportunistic and always have been,” Fairman said.

Sophomore defenseman Tyler Opilka and junior forward Grant Stueve got the scoring going with first period goals. Cyclone forward Alex Grupe found the back of the net early in the second period for his first goal of the season.

Cruickshank picked up his second penalty of the game two minutes after Grupe’s goal. Illinois freshman forward Chance Homerin responded by firing a shot from the right face-off circle to score a short-handed goal and re-establish a two-goal lead for the Illini.

Heflin and the Illini finished off the sweep with a 3-0 win on Saturday.

Homerin and Ernsting scored again in Saturday’s victory. Cruickshank added his 18th goal of the season and extended his five-game point streak.

Illinois was the first team to sweep Iowa State in Ames, Iowa, since last January.

“It’s pretty tough to come into any CSCHL team’s rink and sweep them,” Cruickshank said. “You don’t see that happen very often.”

Illinois is on a three-game winning streak and returns home this weekend to face off against Lindenwood. The Lions are the defending-ACHA champions and swept the Illini earlier this season. Illinois upset No. 1-ranked Lindenwood in Champaign last season.

Lindenwood has not hit the ice since Dec. 3 against Ohio. The Lions have canceled its past two weekends of games due to facility issues and inclement weather.

“We’ll take it to our advantage that they’re coming to the Big Pond after an extended break,” Cruickshank said. “But we just have to keep playing like we did the last two weeks. We’re a tough team to beat and we proved that the last three games.”