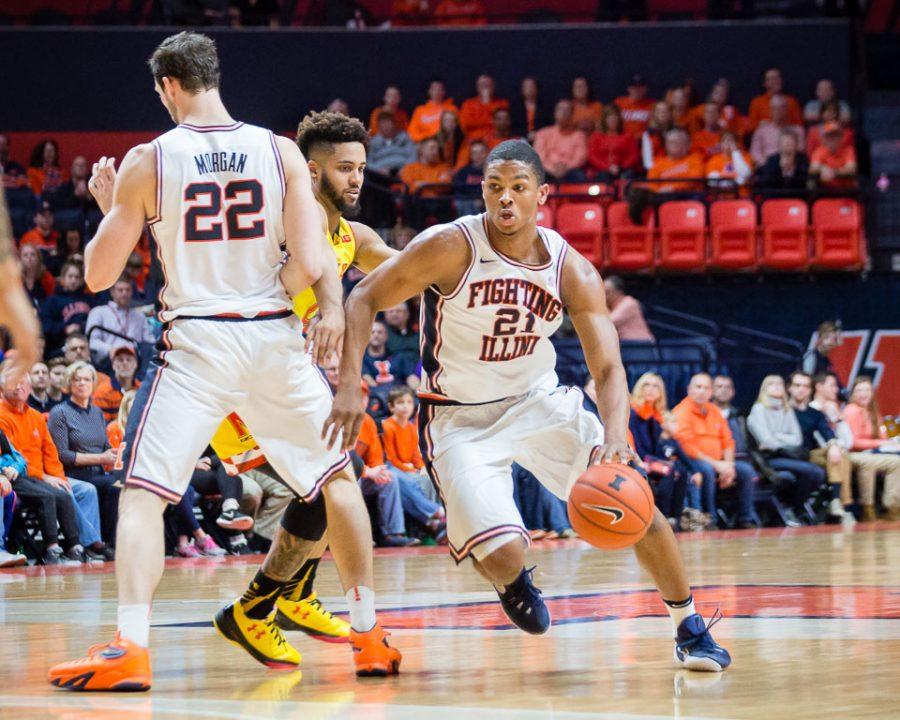 Illinois’ Malcolm Hill (21) dribbles around his defender with the help of a pick from teammate Maverick Morgan (22) during the game against Maryland at State Farm Center on Saturday, January 14. The Illini lost 62-56.

Hidden Stat: Illinois is looking for its first win against a ranked opponent this season, currently 0-3 vs. the Top 25.

The Illinois men’s basketball team will face one of its toughest tests of the season on Tuesday when it travels to West Lafayette, Indiana, to take on Purdue.

The Illini are also coming off a defeat, losing to No. 25 Maryland in front of a packed crowd at the State Farm Center on Saturday.

Illinois (12-6, 2-3) controlled the first half, despite many turnovers from both teams. The Illini and the Terrapins each finished with 12 turnovers apiece.

The Illini looked like a different version of themselves during the first half compared to the last time the two teams faced off. However, the team took similar form to its old self in the second half.

Maryland closed out the first half with four straight points after two free throws and a steal that led to a layup from Melo Trimble, cutting the Illinois lead to five at the half.

The Terrapins found their rhythm in the second half, making three of four three-point field goal attempts to cut the lead to 43-42 with 12:27 left. Maryland took the lead soon after and never gave it back.

Midway through the second half, the Terrapins went on a run to take the lead for the first time since the 14:51 mark of the first half. The Illini finally scored after a nearly eight-minute drought.

“Shots that we had open, we just didn’t seem to knock down, and they took advantage of it,” guard Malcolm Hill said after the game.

The Illini’s inconsistency has proved a consistent problem all season.

In the case of home games, it means opening the game strong but failing to finish the second half.

On the road, the Illini have been beat from the start, struggling especially against Indiana and Maryland.

Starting better will be key for Illinois against Purdue, with Groce saying the Boilermakers have great size with a blend of interior and exterior threats.

One of the big tests from the Boilermakers will come from sophomore Caleb Swanigan, who has been named to countless watch lists and has earned Big Ten player of the week multiple times.

The 6-foot-9, 250 pound forward has been a consistent double-double threat.

“Caleb Swanigan can play inside and outside,” Groce said. “He’s one of those guys who can impact scoring, defense and rebounding, which certainly makes him one of the best players in the country.”

Groce added that the Boilermakers have great three-pointing shooting, averaging .404.

Illinois is looking for its first win against a ranked opponent this season, currently 0-3 vs. the Top 25.

“They play very well together and are very unselfish,” Groce said. “From an offensive efficiency standpoint, they’re one of the best in the country.”