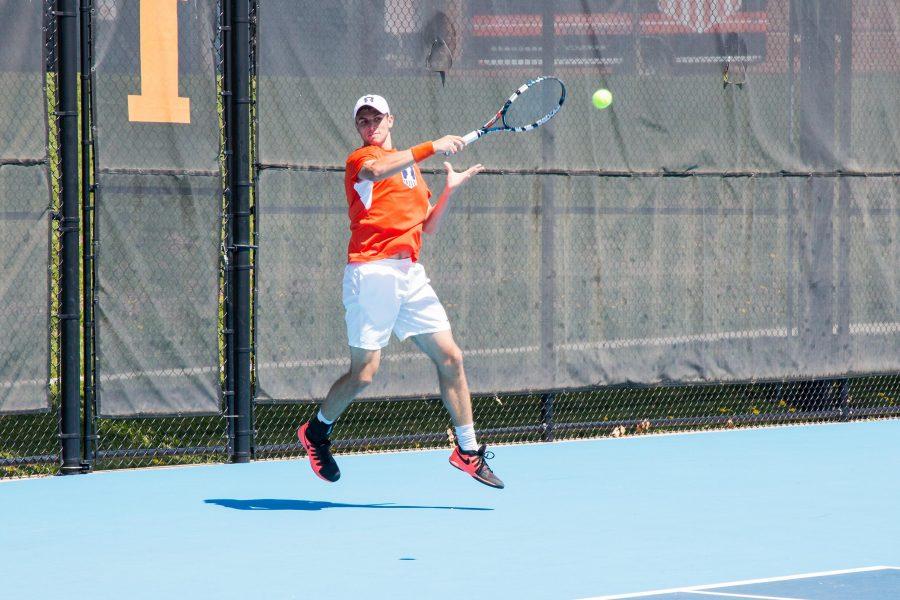 Illinois’ Aleks Vukic attempts to return the ball during a meet at the Atkins Tennis Center on April 17, 2016. Vukic picked up a singles victory in the Martin King Jr. Invitational.

The Illinois men’s tennis team kicked off its season with a trip to Atlanta to compete in the Martin Luther King Jr. Invitational.

Columbia, Georgia Tech and Georgia all participated in the Invitational.

The No. 17 Illini took on the No. 5 Bulldogs for their first match of the season. Juniors Aleks Vukic and Aron Hiltzik and sophomore Pablo Landa picked up victories in singles.

The Illini split the doubles competition with wins coming from the pairs of freshman Noe Khlif and Vukic and freshman Zeke Clark and Landa.

Illinois then took on Georgia Tech the following day. Vukic took No. 9 Christopher Eubanks to three sets but ultimately dropped the match. Hiltzik picked up another singles victory over No. 61 Andrew Li. Clark and freshman Gui Gomes also earned singles victories over the Yellow Jackets.

The Illini faltered in doubles competition, garnering one win out of four opportunities. The winning pair of Hiltzik and freshman Aleksandar Kovacevic defeated Georgia Tech’s Cole Fiegel and Andrew Li.

The Illini rounded out their competition for the weekend with a matchup against Columbia University.

The doubles struggles continued against the Lions, as the Illini would again pick up one doubles match victory. The doubles win consisting of senior Alex Jesse and Gomes upset the No. 34 duo of Jackie Tang and Shawn Hadavi.

The Illini rebounded with their performance in the singles competition. Illinois received victories from four players, including Clark, Vukic and Hiltzik. Vukic pulled off an upset over No. 40 Victor Pham with a 6-4, 6-2 straight sets defeat. Hiltzik also knocked off a ranked opponent by winning a first set tiebreaker and a close second set (7-5).

The team will host an alumni event at Atkins Tennis Center on Jan. 21. The next dual competition will begin Jan. 28 in Norman, Oklahoma with the Illini taking on Arkansas as a part of the ITA Kick-Off Weekend.