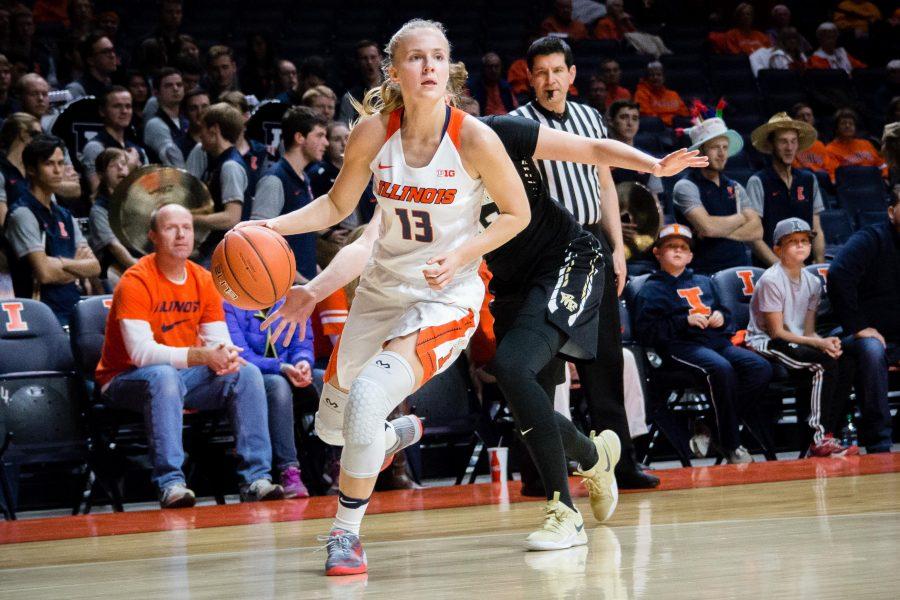 Illinois' Petra Holešínská (13) dribbles around her defender during the game against Wake Forest at State Farm Center on Wednesday, November 30. The Illini lost 79-70.

Following the transfer of Chatrice White after the 2015-16 season, Illinois women’s basketball was not expected to make much, if any, noise this season.

Head coach Matt Bollant’s squad played to that narrative with a 5-8 non-conference record.

But through five Big Ten games, the young team seems to have found itself, winning three of its first five games. The Illini (8-10, 3-2 Big Ten) have won six consecutive home games and have already surpassed last season’s conference win total of two wins, both of which were against Wisconsin.

“We are headed in the right direction and that is what we are holding on to,” Bollant said after Sunday’s 79-59 win over Nebraska. “Yes, we are really young, but we are getting better. (Our freshmen) are hungry to get better. That is awesome and going to lead to some good things.”

Seven of the team’s 12 players are freshmen. Guard Ashley McConnell is the lone senior.

Freshman guard Petra Holešínská has arguably made the biggest strides on the team. The Czech Republic native has experience in international play and is known as a sharpshooter.

Holešínská struggled throughout the non-conference schedule in finding her shots, but the 5-9 guard has found her stroke in Big Ten play. Holešínská is averaging 14 points in five Big Ten games, which includes a goose egg on the scoreboard in Illinois’ road loss at Iowa.

Holešínská is not the only newcomer making an impact for Bollant’s team.

Freshman Brandi Beasley was a highly touted guard from Memphis and she has opened up Illinois’ offense with an ability to drive to the basket and pass the ball. She tallied a whopping nine assists in Illinois’ 78-41 romp against Rutgers on Jan. 7.

Sophomore forward Alex Wittinger has been the Illini’s best player even with so much production coming from freshmen. Wittinger has scored in double digits 10 consecutive games and 16 times this season.

Six of the Illini’s 11 remaining regular season games are away from the State Farm Center. Illinois is 0-6 on the road this season.

The premier matchup on the schedule is a visit to No. 3 Maryland on Jan. 26. Shatori Walker-Kimbrough, the nation’s top three-point shooter, leads the Terrapins.