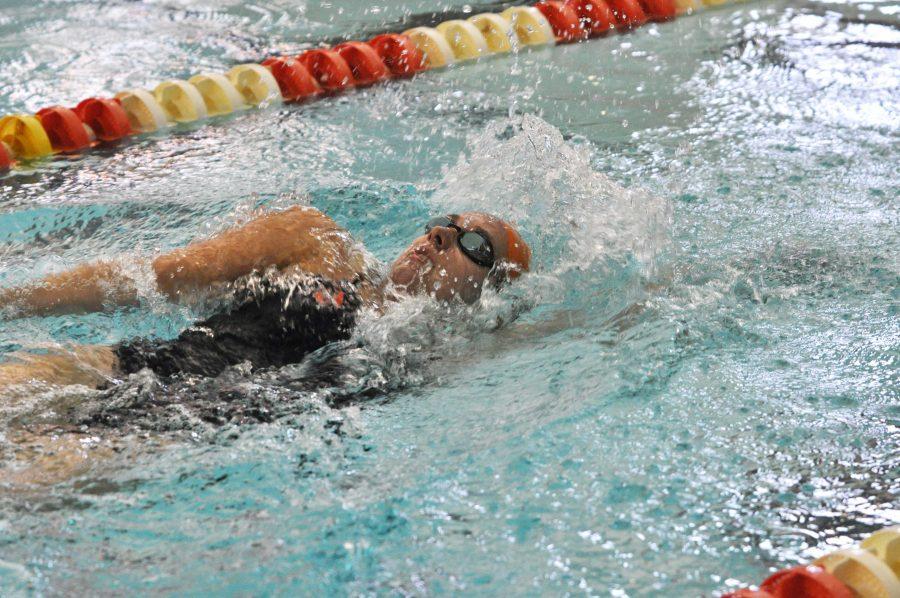 The Illinois women’s swim & dive team won one of the three meets it competed in during winter break.

The Illini began their competition with a home meet against Arkansas.

Senior Amelia Schilling won the 200 free in the first event of the meet. Three other Illini swimmers would win individual races, including junior Gabrielle Bethke in the 50 free, senior Audrey Rodawig in the 100 free and freshman Monica Guyett in the 500 free.

The 400 free relay team composed of senior Gabbie Stecker, Rodawig, Schilling and Guyett placed first, inching the Illini closer to a victory. The relay finished with a time of three minutes and 29 seconds.

The Razorbacks outlasted the Illini in the end, defeating them 179-118.

The Illini next competed against Notre Dame and Iowa in South Bend, Indiana. The sole Illinois first-place individual finish came from Schilling in the 500 free with Guyett following close behind in second place.

Guyett turned in another second-place finish in the 1000 free with Schilling completing the race soon thereafter in third. Junior Samantha Stratford claimed second place in the 200 IM with a time of 2:04.

The 400 free relay team placed third by closing the race in just under three and a half minutes.

Notre Dame and Iowa were too much for Illinois in the end. The Fighting Irish had the first, fifth and sixth-place finishers in the 200 yard medley relay, while the Hawkeyes occupied the second, third and fourth place spots. The Illini completed the meet with 87 points, while Iowa and Notre Dame finished with 112 and 110, respectively.

The Illini wrapped up their Winter Break competition at home against Iowa State. Illinois came in first place in 13 of the 16 events. Stratford claimed three individual first-place honors.

Joining Stratford in the multiple first-place finishes category was Stecker and Rodawig who both won two events each.

Illinois’ relay teams also turned in first place achievements. The 200 medley relay team came in first with a time of 1:46. The 400 medley top relay team came out on top in 3:30. Illinois also possessed the second, third and fourth place slots in the relay. The relay team of sophomore Megan Vuong, Guyett and freshmen Kristin Anderson and Kathryn Kosinski placed second.

The Illini ended the dual meet with a 186-114 victory over the Cyclones, improving their record to 7-4 on the season.

Illinois’ next competition will be Senior Day with a home dual meet against Nebraska on Jan. 21. Following the Nebraska meet, the Illini will compete in the Big Ten Championships in mid-February.