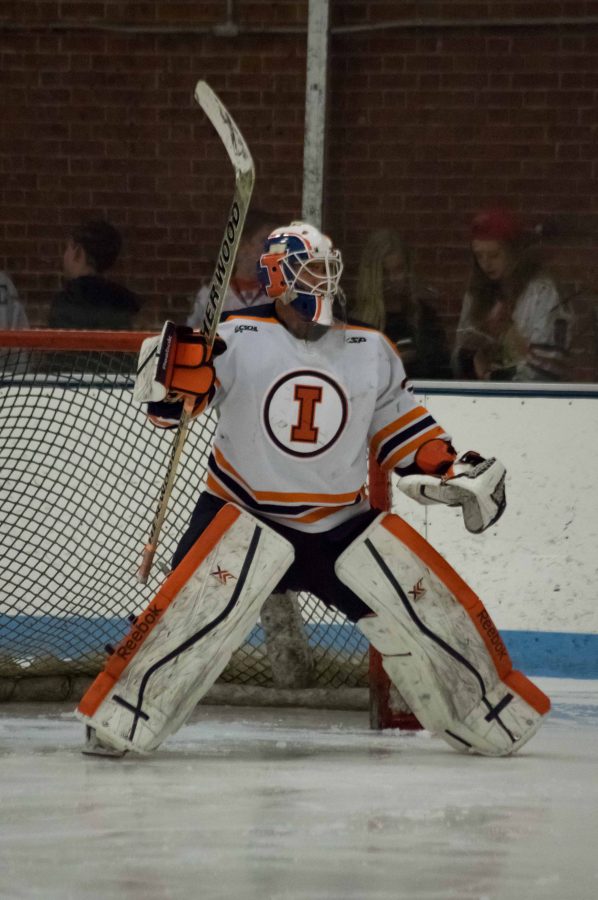 Illinois’ David Heflin defends the goal at the game against Indiana Tech on Saturday, February 27, 2016.

After losing two earlier meetings this season, the Illinois hockey team will attempt to get revenge when Lindenwood comes to Champaign for the weekend.

The last home win came during the previous season when the Lions were No. 1 in the country. The Illini pulled out a 4-2 victory and will be seeking the same results for the upcoming home stand.

Confidence is high for the team following impressive showings during its three-game win streak.

Junior defenseman Joey Caprio believes that the current hot-streak is great for the team and an internal reminder that they are one of the better teams in the country.

“We are coming in pretty hot winning nine of 10,” Caprio said. “We just had a big sweep of Iowa State on the road and confidence is pretty high. Everyone is playing great and everyone is healthy, and we think when all this falls into place we are one of the best teams.”

The team also believes they have a grasp on what the Lions bring to the ice and are in the perfect position to pick up some hard-earned wins.

“We feel pretty good,” said head coach Nick Fabbrini. “We have won three in a row against two top-10 teams and after playing Lindenwood earlier in the season we know what to expect and are confident.”

The games will be the first of what is to be a very lengthy home stand which will continue until the end of the month.

Aside from the typical benefits that the team gets from playing at home, the Illini have another tool that should play dividends for the upcoming games: the ice.

“The ice surface we play on is one of the biggest in North America,” Fabbrini said. “It’s 30 feet wider than a regulation size NHL surface which is what most teams play on, so practicing on it every day gives us a pretty distinct advantage, especially when it comes to angles and spacing.”

This advantage has led to some high scores for the team, with both of the largest goal outputs on the season (seven and 11) coming on home ice.

Caprio agreed with his coach’s sentiment, adding more to an already confident team.

“We’re pretty excited, rarely do you get to stay home for a couple of weekends in a row,” said. “Playing on our ice is a completely different surface and we are ready to go.”

Part of the team’s three game win streak has been the play of backup goalie David Heflin.

Heflin allowed only one of the 93 shots he faced in the two games against Iowa State to pass him.

After his performance, the Illini left with a pair of wins and another shutout added to the tally, blanking Iowa State in the second game.

With Heflin standing on his head and having the hot hand, Fabbrini is left with a difficult decision: who will be starting in goal?

Starter Joe Olen has been nursing an injury, opening the door for Heflin to shine. Even with a choice having to be made in the near future, Fabbrini is playing it by ear and will let the situation work itself out.

“We are going to see how things play out. Joe had a bit of a hip issue last week so we’re hoping he’s ready to go. We’re going to have him practice and see how he feels from there.”