Illinois’ hockey team succeeds on the ice and in community service 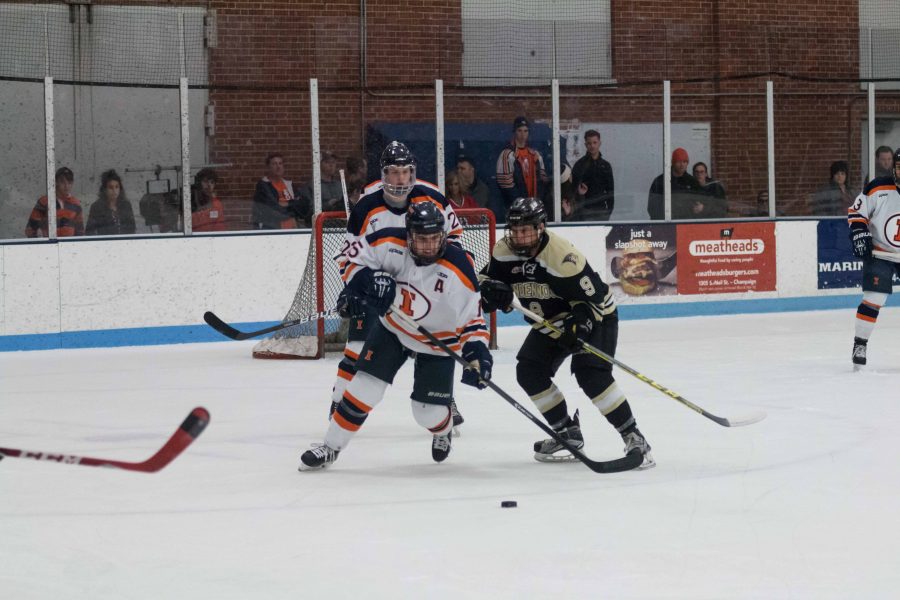 Illinois' Eric Cruickshank fights for possession of the puck during the game against Lindenwold University at the Ice Arena on Saturday, January 30. The Illini lost 4-1.

Some sports awards need just one word to describe what it represents.

The casual sports fan would be hard-pressed to know anything about the American Collegiate Hockey Association and its annual Gongshow Community Service Award.

Say Gongshow to any casual fan and the response will probably be about The Gong Show, the 1970s NBC show hosted by Chuck Barris where amateurs would perform a dubious talent, hoping not to get “gonged” by any of the judges.

Say Gongshow to a hockey player and the response will probably be about the hockey equipment brand, which specializes in shirts, hats, pants and footwear.

Say Gongshow to Illinois’ hockey head coach Nick Fabbrini and the response will be about the ACHA’s community service award and how important it is to give back to the community for him.

Not everyone knows about the award, though. Perform a Google search of the ACHA Gongshow Community Service Award and the lone relevant result is a press release from May 2015 highlighting the winners of that season’s award.

There is not a single article about the 2015-2016 winners, which included Illinois.

A lack of recognition does not bother Fabbrini.

The team is not doing charity work for acknowledgement.

“(The kids we are giving back to) are the kids that come and support us every weekend,” Fabbrini said. “I encourage our guys to think back to when they were kids and looking at the older guys walking around the rink, and how you were sort of in awe with them.”

Fabbrini’s team finished the 2015-2016 campaign with 17 points and a fourth-place finish in the five-team Central States Collegiate Hockey League after going 6-8-2. Illinois lost in the first round of the ACHA national tournament to Syracuse.

Despite all of the adversity, Illinois’ players performed more than 300 hours of community service. A majority of the players’ service hours came from working with the local Champaign-Urbana Youth Hockey Association, a nonprofit organization founded in 1966.

Fabbrini is the director of coaching for the program.

The head coach says all of the players volunteer often with the youth hockey teams at the on-campus University of Illinois Ice Arena. According to Fabbrini, seven or eight players are there on a weekly basis for about an hour.

One Illini who particularly enjoys giving back is junior center Eric Cruickshank.

Cruickshank played several stints on the junior hockey circuit before arriving at Illinois in 2014. His path took him from Team Illinois clubs to a season with the North American Hockey League’s Janesville Jets in 2012-13. Cruickshank followed his stint in Janesville with a season in Cloquet, Minnesota, with the Minnesota Wilderness before finding his way to Champaign.

Cruickshank has become one of the Illini’s most feared scorers, tallying 71 points and 36 goals over his first two seasons at Illinois. The junior was not always such a threat, however. He finished his season in Janesville with eight points and two goals.

The disappointing season taught Cruickshank valuable lessons about his role as a hockey player. More importantly, it taught him how to conduct himself in the community as an athlete.

The Jets were the recipient of the Community Improvement Award at the 13th Annual Forward Janesville Awards Banquet in January 2013. Forward Janesville is an organization that leads private sector economic and community development efforts throughout Rock County, Wisconsin.

The group picked the Jets organization for “demonstrating exemplary contributions to the well being of the Janesville Community,” according to the North American Hockey League press release. Jets players provided over 850 hours of community service by volunteering at non-profit organizations, hospitals, schools and churches.

“As an organization, it has been one of our top priorities to get out and make a difference in our community,” Jets operations manager Greg Hanthorn said in the same release. “Janesville has opened its arms and homes to our players, and they know the importance of giving back.”

The opportunity to be a part of an organization that values its community has stuck with Cruickshank through the years.

“(When we volunteer with kids), they see us as role models and people that they can look up to,” Cruickshank said. “The community of Champaign may not be the biggest hockey community in the world, but to give back to them and to the community in any way that we can is awesome.”

The Illinois players often go to recess and lunch at schools to have the opportunity to play with kids in a relaxed environment.

Cruickshank’s favorite method of service is getting to skate with the kids on the ice and mess around with them.

“To be on the ice with one of (the kids) and skate with them and trip them and watch them fall on the ice and laugh and spin them around on the ice, kids love that,” Cruickshank said. “Just to be able to see the guys they come and watch play and then to be able to interact with us is huge for them.”

Like all of Illinois’ NCAA sports, every hockey player is a full-time student at the University. Fabbrini appreciates that his players have lives – classes, fraternities and other activities – outside of the rink.

“I know they’re very busy with school and everything so I think sometimes it can be a bit of a grind,” Fabbrini said. “It is still always well-attended, and the kids love having us out there. There’s a few guys out there all of the time, even when they don’t have to be.”

While the players’ actions off the ice were reason behind the Illini receiving the national award for all divisions of ACHA hockey, Fabbrini was the man behind the $15,000 raised by Illinois hockey for hosting three benefit games.

One benefit game was for a Illini hockey alumnus whose son was diagnosed with leukemia. Another game was scheduled by the University’s former naval ROTC commander and raised money for the ROTC’s scholarship fund. The last of the three games last season was for the Linking Educators and Parents foundation, in an effort to raise awareness for dyslexia.

“All of our guys I think are good kids that have been raised the right way,” Fabbrini said. “They view it as an opportunity to give back.”