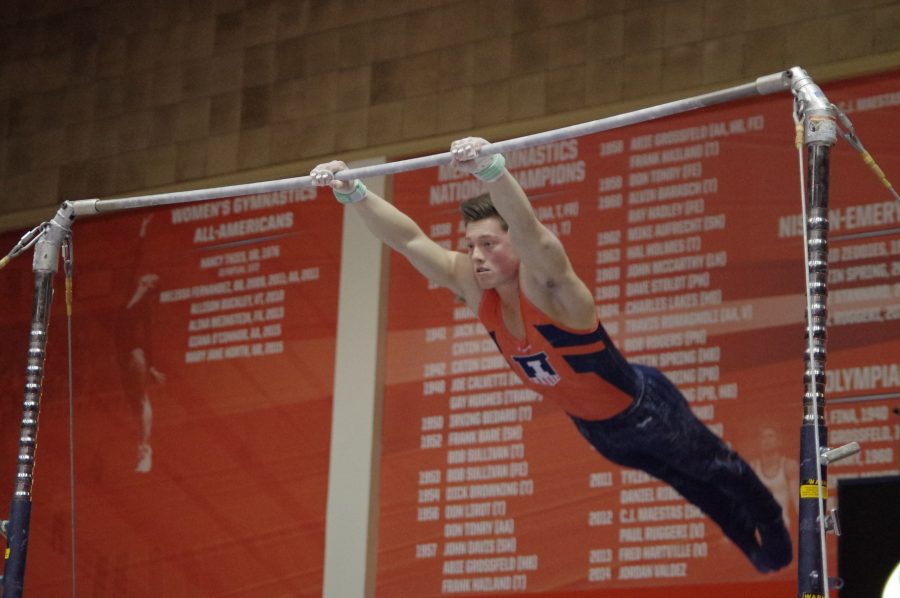 Illinois' Alex Diab performs his routine at the meet against Michigan on March 12, 2016.

The Illinois men’s gymnastics team earned its second win of the season over Arizona State, 422.900-396.200, winning all seven of the event titles.

Senior Matt Foster started off the day on the pommel horse winning his second title of the year with a 14.750. Junior Brandon Ngai — finishing second with a 14.300 — was also instrumental in helping the Illini end the first rotation with a 70.050.

The Illini moved to floor for the second rotation where sophomore Alex Diab scored a 14.400, winning the title for the event. Diab also snagged the rings title in the fourth rotation with a 14.800 score.

Next up for the Illini was the vault. Junior Bobby Baker claimed his second consecutive title of the season with a 14.550.

In the high bar competition, junior Chandler Eggleston took the title with a 14.600 with teammate Ross Thompson coming in second with a 14.100.

The Illini concluded their rotations on parallel bars where they snagged the top three places. Sophomore Johnny Jacobson won the title with a 14.400, senior Tom Gibbs finished in second with a 14.200.  Junior Chandler Eggleston and senior Joey Peters tied for third with a 14.150

In the all-around competition, Jacobson finished first with an 81.850, and Peters was close behind with a 81.200.

The consistency of the Illinois’ performance was what head coach Justin Spring was most proud of.

“With the Arizona State titles, it’s more about the score we put up and our hit percentages and our stuck landings, things you maybe wouldn’t see by looking at the results,” Spring said. “(These are) things I know to be important about where we are in the season and to be the best in the conference at the end of the year.”

After this win, the Illini moved up to third in NCAA rankings. Spring doesn’t see the rank as a target on his back but rather more reason to push harder.

“That’s kind of a reoccurring theme, always ranked lower but finishing higher,” Spring said. “For some reason, people want to count us out, but we continue to overachieve. We are the underdog that’s kind of already overachieved. No one on our team and no one in our program questions our potential.”