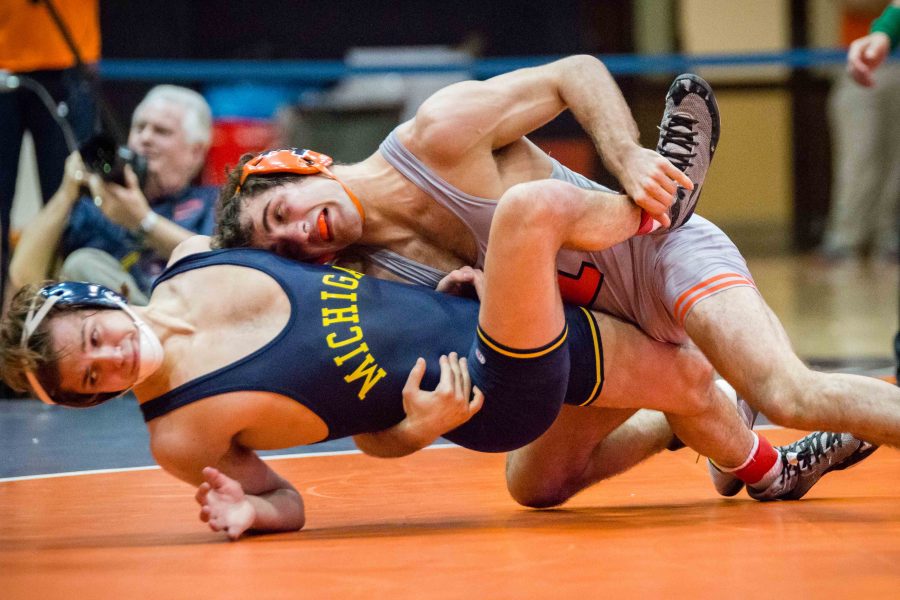 Illinois' Zane Richards wrestles with Michigan's Stevan Micic in the 133 pound weight class during the match at Huff Hall on Jan. 20. Richards won by decision, and the Illini defeated the Wolverines 34-6. The Illini’s victory moved their record to 3-2 overall and 2-2 in the Big Ten.

Illinois wrestling emerged looking like a top team after taking down No. 15 Michigan Friday, 34-6.

The No. 12 Illini got key wins from seniors Zane Richards and Zac Brunson and junior Kyle Langendefer over higher ranked Wolverines’ opponents.

Illinois head coach Jim Heffernan complimented Richards, who bounced back from a loss against Ohio State on Jan. 15. Richards’ win gave the Illini a 9-0 lead that they never relinquished.

“Zane really needed to answer the bell, and I think he did,” Heffernan said. “He wrestled well with some emotion and fire.”

No. 1 nationally-ranked junior Isaiah Martinez continued his undefeated year with a 3-1 victory over No. 2 Logan Massa.

“When you have a big one versus two matchup… there’s nothing like it… not just for me, but everyone gets excited,” Martinez said. “This is the most people I’ve seen at a dual in a long time.”

The nearly 1,300 person crowd was boisterous all night, constantly cheering and lobbying the referees for points for the Illini.

“(The crowd) makes us get up — a lot of the guys on the team shine bright when a lot of people are around,” Langenderfer said.

The Illini finished the night with pins by junior Brooks Black and sophomore Emery Parker at Heavyweight and 184 pounds, respectively.

The Illini moved to 3-2 overall with the largest win over a ranked opponent since 2008 and now sport a 2-2 record in the Big Ten.

“This was the most complete dual we’ve wrestled,” Langenderfer said. “I think this will propel us into the rest of the dual season and hopefully charge us into nationals.”

Illinois resumes Big Ten play on Friday with a match against Michigan State at Huff Hall.