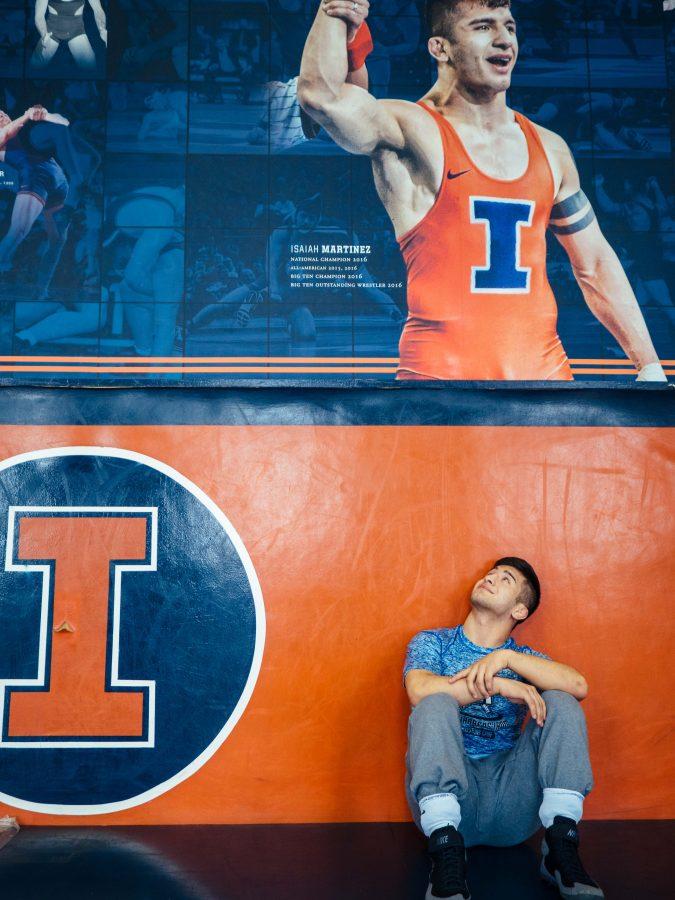 The average observer might not be able to tell, but Isaiah Martinez didn’t watch a ton of wrestling while he was growing up.

“I was never exposed to high level wrestling as a kid,” Martinez said. “I never went to many college wrestling duals … in California, wrestling’s not very big collegiately.”

The junior was first introduced to the NCAA wrestling championship in high school. He said he remembered watching two-time national champion Brent Metcalf and current MMA fighter Darrion Caldwell battle on the mat.

So now, Martinez uses his place at the top of college wrestling to make sure that kids going to Illini matches don’t face the same problems that he did.

In his words and in the eyes of others, he has become Illinois’ wrestling ambassador.

His Twitter bio even reads, “The face of NCAA wrestling.”

“I try to think about what it would be like to be a kid … how I would want someone to be if I was coming up and asking someone to sign some stuff,” Martinez said.

For elementary and middle schoolers, Martinez may seem like a larger-than-life figure.

But he says he wants to seem “like a real person.”

While he is enjoying the ride, he said he knows that he won’t be on this pedestal forever.

“These four years of college will probably be the peak of my popularity, so I try to get the most out of it while I can,” Martinez said.

Martinez has gotten the most out of his time in the spotlight this year, moving up a weight class from 157 pounds. In that weight class, he won two national titles during his first two years at Illinois.

This season, he moved to the 165 pound weight class, where he is currently the undefeated No. 1.

“As I’ve gotten older, it’s become about a legacy,” Martinez said. “What kind of legacy do I want to leave behind?”

Few can argue with the legacy Martinez has created so far.

He is well on his way to becoming one of the most accomplished athletes in Illinois and NCAA history, boasting a 0.988 winning percentage. He has also accumulated personal awards ranging from Big Ten Champion to Athlete of the Year, as well as awards and recognition from media outlets and the University itself.

“I’ve given my life to this sport; there’s always that fuel to be the best,” Martinez said.

That fuel isn’t running out anytime soon. Martinez credits moving up a weight class to his continued fire and passion to compete.

Just last week, Martinez defeated the No. 2 wrestler in the country, despite saying that he didn’t wrestle his best.

Martinez also achieved victory against the No. 3 wrestler at 165 pounds at the Midlands Classic, which he won.

However, while he said the recognition for his work is nice, Martinez still has bigger plans than regular season accolades.

“My eyes are on the prize at the end of the year,” Martinez said. “It’s all about the national championship.”

But until then, he’s enjoying signing autographs for the lines of kids who wait for him after a dual.

“I’ve said it a lot, and I’ll say it again: It doesn’t last forever,” Martinez said.