Illinois football early enrollees hungry to get to work 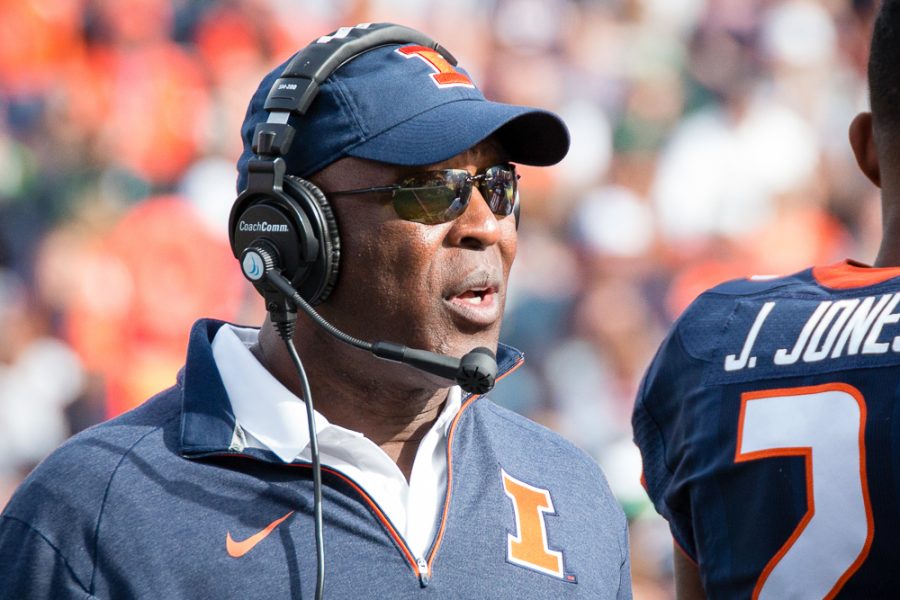 Three high school graduates and one junior college transfer enrolled at the University for the spring semester and started workouts with the Illini.

While they come from different backgrounds, they all have one thing in common.

“Now that we have guys that want to win, we are hungry,” Cincinnati native offensive lineman HoJo Watkins Jr. said. “We’re ready to show people what we’re cooking in that weight room.”

The linebacker comes to Illinois with two years of eligibility remaining. He led Garden City to a junior college national title in 2016, finishing the season with 95 tackles and 12.5 TFLs.

Phillips is not concerned with Illinois’ disappointing season.

“Three-nine just means you’re missing pieces,” Phillips said. “You’ve got to be hungry. Three-nine makes you hungry. At junior college, I went 3-8. We got hungry, and then we won a national championship.”

Watkins Jr. and Phillips come to Champaign from cold weather climates with a bulldog mentality.

The now Illinois roommates were teammates at Miami Central in Florida.

The quartet brings different skill sets to both sides of the ball as they look to make an impact in Smith’s second year.

Watkins said it is an honor to be one of the first players to come to campus from Smith’s initial recruiting class and that he still remembers the day Smith called to give him an offer.

“It’s a real blessing to say that I’m his first class,” Carney said. “I want to let people know that he didn’t make a mistake choosing us.”

Illinois currently has 20 players signed for the Class of 2017. The remainder of the recruits will arrive on campus in the fall.

Carney said he made the effort to enroll early so he can learn the playbook and better situate himself for position battles.

“I want to dive right into the playbook and learn my X’s and O’s,” Carney said. “I’m just trying to learn what the former (defensive) linemen, who are supposed to be first-round picks, use. I want to be the next one in that system.”

Despite being physically big men on campus – Watkins stands at 6-5, 280 pounds – they are still going through the typical struggles of freshmen on a Big Ten campus.

“There have been times I’ve been using my phone for MapQuest to find buildings.”

The four players have been working out and letting the experience of being at Illinois sink in before spring football officially starts in mid-February.

“Coming from where I come from, to have a full-ride scholarship is a blessing,” Phillips said. “This is a dream that you think about when you’re younger. Big Ten football is big, and it’s definitely a blessing.”