Assistant coach takes the reigns for Illinois hockey this weekend 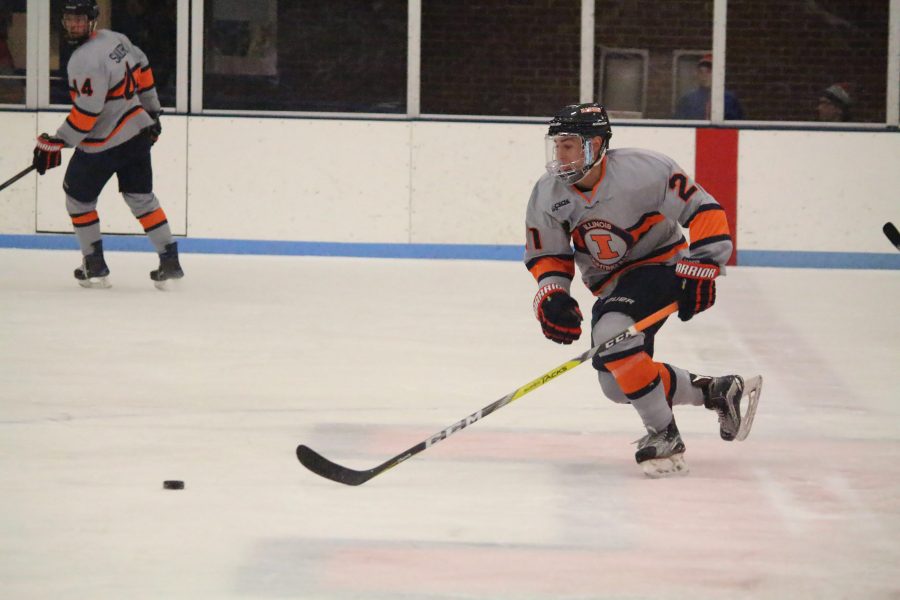 Luke Forfar (21) knocks the puck away from the Chicago Cougars' player and gains possession of the puck fro the Illini at the Ice Arena on Saturday, Dec. 10. The Illini won 8-3.

Quick notes: Head coach Nick Fabbrini, forward James McGing, defenseman Tyler Opilka and goalie Joe Olen are part of the Winter World University Games’ U.S. team. The quartet will be in Almaty, Kazakhstan, for the tournament from Jan. 29 to Feb. 8. They will miss this weekend’s games.

Hidden stat: Tommy O’Brien will head coach this weekend in place of Fabbrini. He has no head coaching experience, but works as Illinois’ hockey assistant and goalie coach.

Tommy O’Brien is a doctoral candidate at the University’s College of Engineering by day and Illinois’ hockey assistant and goalie coach by night.

The 29-year-old O’Brien will try something new this weekend: act as head coach.

Illinois will be short-handed this weekend for a home series against Indiana because head coach Nick Fabbrini, forward James McGing, defenseman Tyler Opilka and goalie Joe Olen are part of the Winter World University Games’ U.S. team. The quartet will be in Almaty, Kazakhstan, for the tournament from Jan. 29 to Feb. 8.

O’Brien has no prior head coaching experience.

Freshman forward Luke Forfar trusts that O’Brien, a goalie at Notre Dame from 2008-2010, can handle the position.

“He knows what we want, and he knows what we need to do,” Forfar said. “He’s certainly qualified knowing where he played and the level he played at. Stepping into that position as a head coach should be pretty easy for him because he is a leader.”

The Illini held a practice in Hoffman Estates, Illinois, over winter break last month, with O’Brien leading the team.

Fabbrini already trusts O’Brien to run several facets of the team as an assistant. The head coach says he is more than comfortable putting him into a new position.

“It’ll be good for him too because he’s looking to continue coaching, and there’s not a lot of college staffs that have room for just a goalie guy,” Fabbrini said. “The fact that he’s running our D and lines — I have all the faith in the world in him running our penalty kill.”

O’Brien’s stress levels should stay fairly low this weekend with the Hoosiers (6-14-1) coming to Champaign. The Illini (16-7-3) have won four out of their past five games, all against ranked conference opponents.

This weekend’s series is the final time the Illini face a non-conference team until the ACHA national tournament in mid-February, when Illinois welcomes Ohio and Robert Morris to the its ice arena.

Forfar says there are still areas Illinois needs to improve on this weekend, despite being on a hot streak.

“We just need to play a full 120 minutes,” Forfar said. “We need to work on closing games.”

The Illini had a lethargic performance in a 6-2 loss Friday.

They entered the third period up 3-1 on Saturday before two late Lions goals tied up the game. Junior center Eric Cruickshank scored the lone shootout goal to carry the Illini to the victory.

Forward Christian Schurmann-Colicchio leads the Hoosiers with 15 goals and 24 points this season.

Grand Valley State and Michigan State have swept Indiana each of the past two weekends. Indiana has been outscored 33-6 over the four games.

Forfar says Illinois must not underestimate Indiana, despite the two teams heading in opposite directions.

“Right now, we may be playing well, but it will be how we play in three weeks,” Forfar said. “It’s all about consistency.”