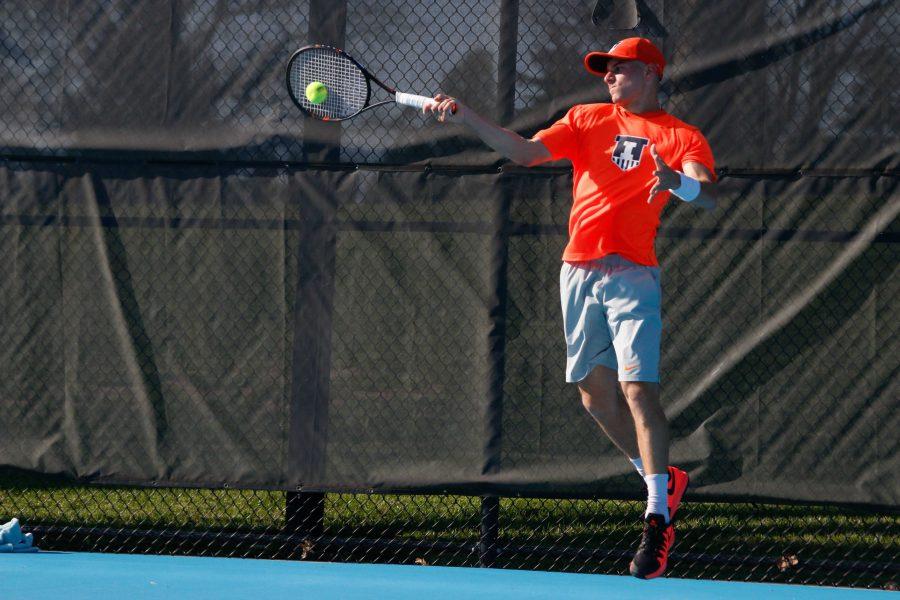 Illinois’ Aron Hiltzik (So.) hits the ball back during the game against Michigan State at Atkins Tennis Center on Friday, Apr. 15, 2016. The Illini won 4-0.

The No. 17 Illinois men’s tennis team will pay a visit to Norman, Oklahoma this weekend to take on No.19 Arkansas in its first dual match of the season.

The Razorbacks and the Illini will face off in a tournament hosted by the University of Oklahoma. Arkansas is fresh off a stretch of home games, while Illinois is kicking off the 2017 season with its first official match.

“Arkansas is a really well-coached team. We have respect for their coaching staff and players,” Illinois head coach Brad Dancer said. “They have played considerably more matches than we have. We respect that, but we’re getting ready to go.”

The Illini pinched in additional competition last weekend as they hosted an alumni tournament, where current team players beat the alumni team 5-2.

The alumni tournament and a previous tournament in Atlanta shed some light on the early season for the men’s tennis program.

Juniors Aron Hiltzik and Aleks Vukic are leading the team, which will hopefully prepare their younger teammates for faceoffs this weekend.

“(The matches) in Georgia were the ones that got us ready,” Dancer said. “We got some guys who are doing well.”

While the Illini tennis program is exhibiting its largest freshman class in over 10 years, the Razorbacks have no freshman players on their roster. Arkansas boasts five seniors, one junior and three sophomores.

The gap in age, however, isn’t bothering the Illini.

“For all of the freshman this is their first dual match,” Dancer said. “But we did really well at our simulations down in Georgia. It helped our guys really understand what we’re really going into for the rest of the season.”

Since the trip to Atlanta, the team has been focusing on playing full sets during practice to prepare for this weekend. Looking into the coming spring months, however, the Illinois men are focusing on one match at a time.

“(This season) is of those things where we’re going to have to play it match-by-match,” Dancer said. “I don’t believe in momentum, we’re just focused on this first dual match.”