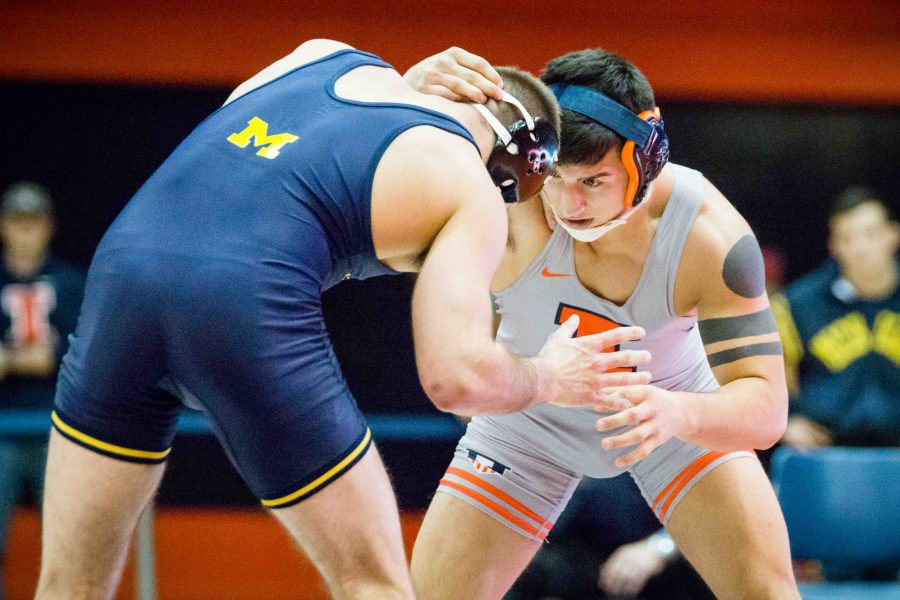 Illinois' Isaiah Martinez wrestles with Michigan's Logan Massa in the 165 pound weight class during the match at Huff Hall on Friday, January 20. Martinez won by decision and the Illini defeated the Wolverines 34-6.

The Illinois wrestling team will look to continue its recent roll this Friday at home against Michigan State on 7 p.m. Illinois is riding a two-game win streak, defeating Michigan and Northern Illinois by double digits in Champaign last weekend.

The Illini have bounced back from a difficult stretch where they lost two of their first three Big Ten matches behind the steady play of their middleweights.

Langenderfer’s recent success has been noticed, and he earned a spot on the Intermat top-20 for his weight class, coming in at No. 18.

“He’s always been good,” head coach Jim Heffernan said. “He’s starting to mature a little bit and figure things out, but skill wise he’s as good as anyone.”

Langenderfer isn’t going to let himself get caught up in the hype, however.

“I’m happy to be in the conversation with those guys, but I’ve got to keep doing what’s gotten me to this point,” Langenderfer said.

Langenderfer said that even though he isn’t flying under the radar anymore, he still has something to prove.

While the Illini have been impressive on the scoreboard, Heffernan still thinks this team has a way to go.

“So much of it is consistency, you do everything you can to not allow it to happen but it happens,” Heffernan said.

After the dual against Michigan State, Illinois flies south to Tempe, Arizona, where the team will square off with Arizona State on Sunday at 5 p.m.

While it may seem like a daunting task, Heffernan isn’t too concerned about the travel.

“These guys are 18 to 22 years old, they can sleep through an earthquake if they had to,” Heffernan said. “So I don’t anticipate any issues.”

Martinez accepted the challenge with a smile.

“It’s what makes (wrestling) so great, the different kind of challenges… having class on Friday, then having to wrestle,” Martinez said. “Then we turn around the next day and travel, with a top-25 opponent on Sunday.”

Martinez believes that the team’s experience will help them.

“The older you get, the easier it gets,” Martinez said.

Arizona State will be well rested, with a week off in between this dual and its previous one, a loss to No. 16 Stanford.

The dual will feature four top-20 matchups at 157 pounds, 165 pounds, 184 pounds and the Heavyweight weight classes.

Heffernan just wants his team to do what he knows they can.