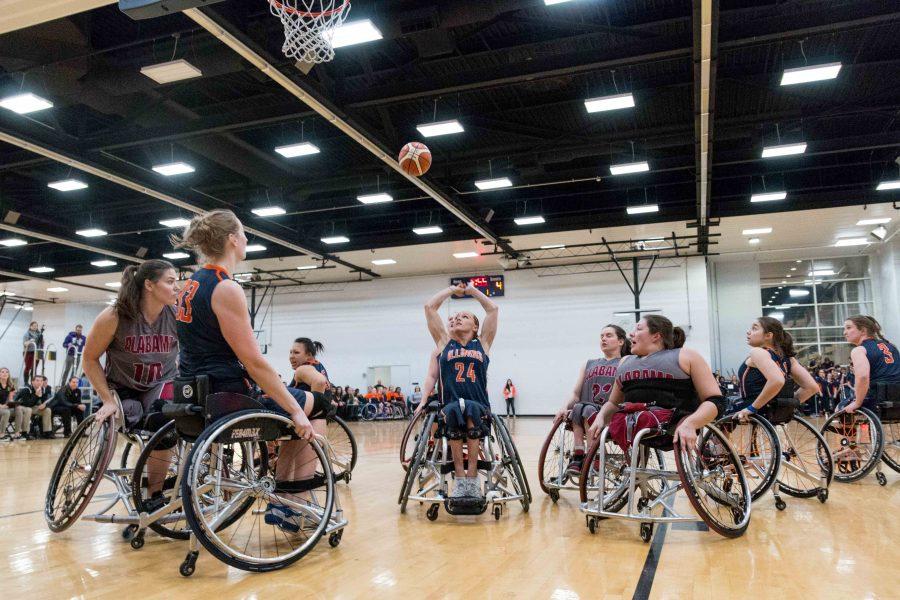 Illinois’ Megan Blunk shoots the ball during the game against Alabama at the Activities and Recreation Center on Feb. 12, 2016. The Illini won 56-47.

The Illinois women’s wheelchair basketball team earned a road trip win that was its first real victory in two months, and the Illini are confident heading into the first home tournament of the season.

“I think we need to play as a team, and I think we did that at the last tournament, especially with our pick and rolls,” first-year graduate student Christina Young said. “I think that was very successful. I think that if we continue that, we will be even more successful at this other tournament.”

In the their last outing, the Illini went 1-3 in Wichita, Kansas.

Because of a string of forfeits by their opponents at a tournament in Wisconsin-Whitewater, the lone win in Wichita was their first non-forfeited win since November.

The team’s next chance for a win will come Friday and Saturday at the ARC. Illinois will play two games against a co-ed team from the Canadian National Academy.

Illinois head coach Stephanie Wheeler said the tournament will give the team a chance to show its progression throughout the season.

But since their last matchup with Canada, the Illini added freshman transfer Janet Scanlon and Paralympian and senior Chelsea McClammer. McClammer played on the team two years ago, but left to focus on wheelchair racing in the Rio Paralympics.

Scanlon and McClammer made their season debuts in Wichita and, over the course of four games, totaled a combined zero points, zero rebounds and two assists.

McClammer is not setting the expectations too high for herself in the team’s next games.

“I don’t think I will be a starter,” McClammer said. “But I hope that when I do get some playing time, it will be good.”

Illinois will instead continue relying on starters Kaitlyn Eaton, Shelby Gruss, Erica Wilson and Young for most of the production. Eaton scored in double figures in all four games in Wichita, while Young did so in two.

“Everyone needs to be prepared for the game — both physically and mentally,” Young said. “I think if we continue to have fun like we do when we’re out there, that’ll also help us be successful.”

Eaton said she is also ready for the team to be fearless.

“Just because the other team may be bigger or they may seem faster, we shouldn’t count ourselves out,” Eaton said.