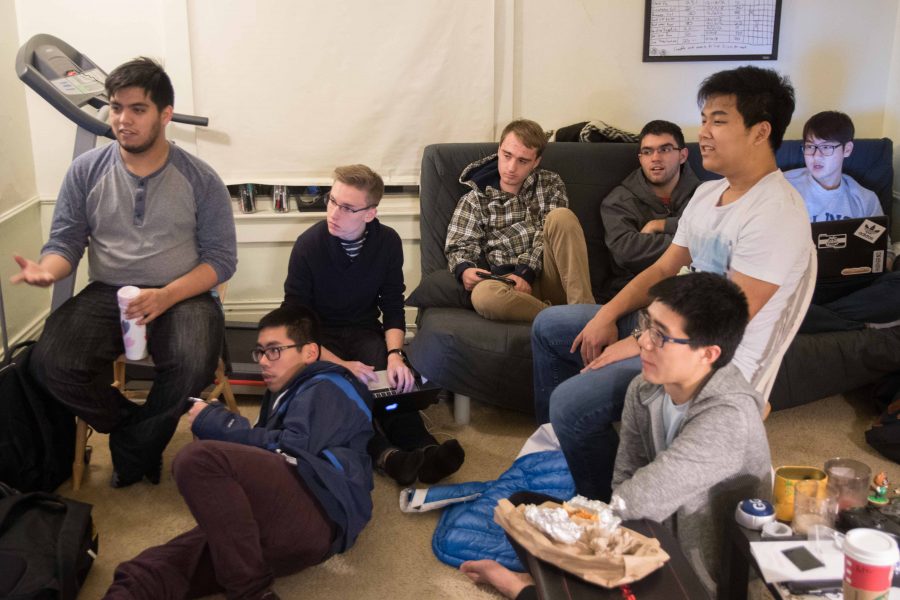 Members of the Illinois League of Legends team review videos of previous games to see where they can improve.

A new team is representing the Illini.

It won’t compete on the hardwood, the football field or in a gym. These players will instead be at a computer playing League of Legends — a video game.

League of Legends is described as a multiplayer online battle arena. According to Riot Games, the creators of League of Legends, about 67 million users played its game every month in 2014.

The Big Ten Network has started its own League of Legends program where students at Big Ten universities will represent their schools to see who is the best at the game.

A collection of undergraduate and graduate students will be representing Illinois in its inaugural season, and all Big Ten schools besides Penn State and Nebraska will have a team competing.

The creation of the league comes off the success of the BTN Invitational that had teams from Michigan State and Ohio State play a match that was streamed by BTN.

“We are confident that, together with Riot, we can build a successful platform for future esports intercollegiate competition,” Erin Harvego, the vice president of marketing for BTN, said in a press release. “We hope to learn a lot in this pilot season.”

This follows the trends of more traditional sports investing in esports.

The Philadelphia 76ers and Miami Heat are organizations that have begun investing in esports by buying their own pro esports teams. Even Magic Johnson and Shaquille O’Neal have invested in pro esports.

Some schools have even started scholarship programs for esports players, including the University of California Irvine and Robert Morris University.

Each player competing in the BTN conference will be awarded a $5,000 scholarship, with the managers and coaches making $2,500.

Jake Astin, a graduate student in Business and manager of the team, said that this league and others like it will be better for the game.

“This will be more of a move to legitimize esports in a collegiate space,” Astin said. “These sorts of leagues allow for a way to develop new talent. These leagues in the long run will develop professional leagues.”

Illini eSports, the RSO that runs the League of Legends team as well as other competitive esports teams, knew around the end of last year that Riot Games and Big Ten Network were interested in creating a conference together.

The Big Ten will be split into East and West divisions. The teams will play in a round-robin, and the top four teams from each division will be placed in a tournament where the championship will be broadcast on BTN.

This has offered the teams at the Big Ten schools a chance to show off their skills.

“I always played competitive sports, and competition is something I thrive off of,” T.J. Bjorklund, freshman in DGS, said. “Doing this still allows me to be competitive. It is nice to have that sense of competition and having a team that shares a similar goal.”

The members of the Illinois esports team, like any involved student, have to balance both being a student and their time in League.

The teams play scrimmages against other teams about three times a week and have regular “VOD review sessions” where they watch recordings of their matches and analyze and learn from them much like film study.

Bjorkland said that, as a freshman, he has figured out a good balance between school and playing League.

“It is the same thing as almost anything else you make a commitment to,” Bjorklund said. “You just gotta make time for it. Maybe instead of homework at night, you do 30-minute bursts in between classes. Overall, it’s not too difficult.”

The team is confident that it can be more competitive this season.

“In previous years, we were less organized; there was inconsistent practice,” Astin said. “We are building an identity and a team together. We know we need to put in a lot of work to do some catching up.”

According to Armando Gomez Jr., junior in Engineering and the team’s coach, the team is currently ranked within the top 2 percent of players who play League of Legends.

“We expect to win the West division, and our main competition is in the Eastern division,” Gomez said.

The Illini said they are ready to prove how good they are throughout the season.

“We’re all focused on the same goal together,” Gomez said. “We want to make sure together that Illinois has at least one winning team. We want to prove that we are a really coordinated and competitive team.”

Illinois played its first game against Wisconsin, losing 2-1 in a best of three set. The team’s next matchup will be against Purdue on Feb. 4.