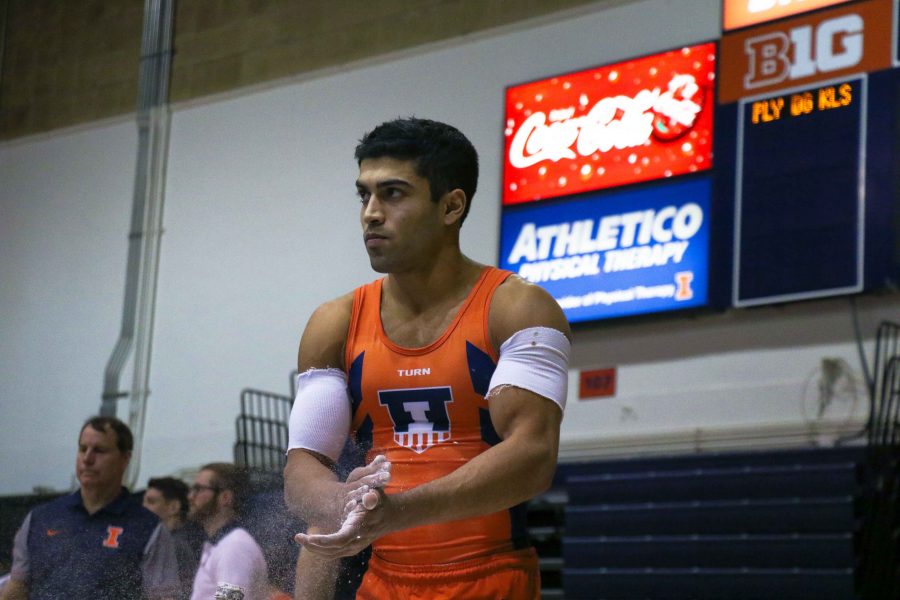 Illinois' Joey Peters prepares for the parallel bars in the meet against Minnesota at Huff Hall on Saturday, Jan. 28.

The all-around gymnast was highly anticipated and quickly showed the Illini that he lived up to the hype.

Within the first month of his collegiate career, he was named Big Ten Freshman of the Week. By the end of the season, Peters had earned the title of All-American in the all-around.

He further expanded his brand sophomore year, earning the bulk of his awards on the rings.

In his junior year, he outdid himself, setting career bests in the floor, rings, vault and the all-around.

However, Peters wasn’t just impressive in the gym but also in the classroom.

He has been a three-time Champaign Gymnastics Academy First Team All-American Scholar-Athlete selection, as well as an Academic All-Big Ten member for the past three years in a row.

But at the beginning of Peters’ senior season, he suffered a season-ending — potentially career-ending — injury to his left rotator cuff.

Peters was unaware of the severity of his injury.

“I normally have shoulder flair ups all the time so we kind of went through the same protocol that we’ve always done,” Peters said. “This time I guess something was actually wrong. Just pushing through it made it worse — to the point that I couldn’t do anything.”

Peters didn’t compete in what should have been his senior year.

“You cannot understand how hard the all-around is in the sport of gymnastics right now,” said head coach Justin Spring.

After the surgery, Peters spent the summer doing basic rehab, not just on his shoulder but his wrist and knee as well.

“I read online that Drew Brees had the same exact shoulder surgery that I had and was back throwing footballs within eight months after his surgery,” Peters said. “I kind of compared it to that. If he could do it, so can I.”

During that summer, he lived by one rule — put good in and get good out.

He stayed in instead of partying, staying away from drinking altogether. He changed his diet to focus on being as healthy as possible, but Peters mostly just forced himself to relax and let his body repair itself.

“It was not an easy summer, and he has come back and placed himself as one of our top all-arounders,” Spring said.

Since Peters had gotten injured, the program offered his scholarship to an incoming freshman.

Instead of being angry or negative, he shrugged and said “Shit happens,” and immediately went into planning for his next step — the idea of quitting never crossed his mind.

“The first thing I thought of was to call my parents, letting them know they might be having to dish out $40,000 for my final year,” Peters said.

Fortunately, it didn’t have to come to that.

After applying to various grad programs on campus, Peters settled on the Kinesiology master’s program where he landed a graduate internship.

“Basically (it’s) like a full scholarship; I do research a couple hours a week and TA a few (kinesiology) classes twice a week as well,” Peters said. “With that, I get my tuition waived and I get a monthly stipend along with it (which) was basically just another full scholarship.”

Being a student athlete and working at the same time can be difficult, but Peters has advisers to help him balance his time. His adviser is the wife of a former gymnast, Ian Rice, and Peters said Ian is like another adviser.

“They understand the training that goes into that and they are super flexible to schedule things around my time,” Peters said. “I’m very thankful, they make it possible for me to train at the highest level that I can possibly train at and also work and do research and that stuff as well.”

After getting over the hurdles he faced academically, Peters returned to the team this year, during his first year of graduate school.

After his first official meet — the Windy City Invitational in Chicago — Peters placed third in the all-around scoring 79.550, seven points below his personal best, 86.550. The following week at Arizona State he finished second with an 81.200.

While the scores might not be close to Peters’ personal best,

Spring said he was impressed with the gymnast’s ability to come back as one of the best.

“It came with an incredible amount of fight, and I’m just really proud of where he is right now,” Spring said.