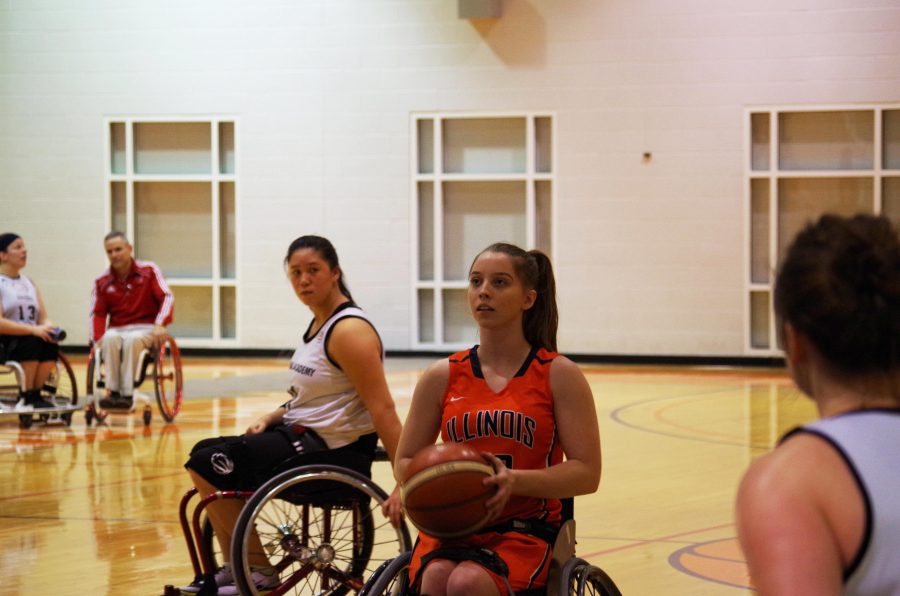 Illini’s Erica Wilson (23) takes a freethrow shot against the Canadian National Academy in the ARC on Friday, Jan. 27th.

The Illinois women’s wheelchair basketball team started this season knowing that it would have a height disadvantage.

Though the team added more height in the middle of the season with freshman transfer Janet Scanlon, that was still not enough in the Illini’s 0-2 showing over the weekend.

Illinois lost both games to the Canadian National Academy Team, which was led by Kady Dandeneau and Paralympian Tamara Steeves. Dandeneau and Steeves averaged 26 and 17 points, respectively, as their team capitalized on Illinois’ height weakness.

In the first game of the series, Canada, coached by former Illinois coach Mike Frogley, scored 22 of its first 25 points in the paint. That was in addition to a 27-8 run in the first 12 minutes.

The two teams’ play leveled off toward the latter half of the game, with both Canada and Illinois scoring eight points apiece in the fourth quarter.

Illinois freshman Erica Wilson had a team-high 10 points and was the only Illini to score in double figures in the game.

In the second game, though, no Illini scored in double figures, while Canada’s two leading scorers each added 21-plus points.

They lifted Canada to a 21-8 scoring run in the first 15 minutes of the second game and eventually sent Illinois to a 60-22 loss. The Illini shot 30.2 percent in the game and had fewer than 10 points in the paint. Canada shot 60 percent, which was bolstered by 24 points in the paint.

Illinois senior Shelby Gruss, whose main contributions came in the form of setting picks and passing, said she learned about the importance of anticipating the action.

“You always got to be ready for the next … one or two plays ahead to be able to dictate on offense,” she said.

Scanlon, in her home debut with the Illini, said the weekend series still gave them a chance to try new strategies.

“I feel like the whole weekend was just about being able to function as a team and work differently with each other,” Scanlon said. “And that’s awesome.”

Illinois, now 7-8 on the season, will play again next weekend in Edinboro, Pennsylvania.