Illinois hockey player in midst of career season after benching 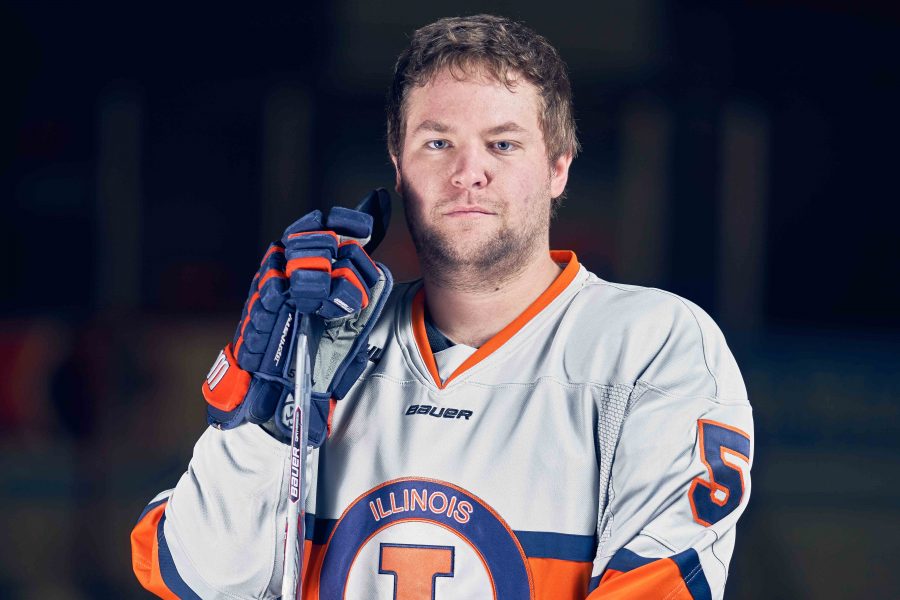 Joey Caprio, like any other Illinois student, used to stroll down Green Street every day to decide where to eat among his favorite fast-food restaurants.

Lunch may have been Panda Express and dinner was probably some pizza. When he was home in Bolingbrook, Illinois, Caprio made time for Portillo’s and Buona Beef.

But his favorite Green Street stop is Chipotle because of its relatively healthier options.

“Even though Chipotle is not that bad for you, you have to limit the portion sizes,” Caprio said.

The junior seems typical, except for the fact that he is a 23-year-old defenseman on the Illinois hockey team.

Caprio, or Cap as his teammates call him on the ice, made his season debut on Sept. 29 on the road at Illinois State. The Illini defeated the Redbirds 6-2, but Caprio did not score.

The 5-foot-10 defender weighed nearly 250 pounds and was in no shape to be playing in the American Collegiate Hockey Association’s Division I, the highest level of club hockey.

“We determined that I wasn’t in the physical shape that I needed to be in,” Caprio said. “It kind of hurt, but it was my fault. I wasn’t taking care of my body, and I wasn’t watching what I was eating.”

Behind the support of Fabbrini and assistant coach Tommy O’Brien, Caprio went to work, going to the gym by himself three days per week and hurrying to the Illinois Ice Arena for practice about four days a week. Fabbrini went to the gym with Caprio after practices on Mondays and Wednesdays.

Fabbrini benched Caprio as he trained to get back into playing shape, but the Illini struggled on the ice in Caprio’s absence. Illinois started the season with seven consecutive victories before hitting a three-game losing streak against ranked foes.

The junior said watching from the sidelines as his team fell in the standings was the most difficult aspect of his conditioning issues.

“It hurt us because we weren’t winning games, and the team wasn’t performing at what we needed to perform,” Caprio said. “I took it personally. I took it to heart. It made me work that much harder.”

“Any time a guy isn’t playing as much as they like, it’s interesting to see how they’ll respond,” Fabbrini said. “I thought he responded as well as anybody I’ve ever been around. He certainly wasn’t happy about it, but he didn’t get down and he didn’t sulk. He just worked his ass off and got back to where he belongs and where we needed him to be.”

Joey has had that work ethic his entire life.

“He’s committed to whatever you get him to do,” his mother, Barbara Caprio, said. “He will finish it.”

Barbara is Caprio’s biggest fan. She has also seen him fight through adversity.

Caprio was 19 and playing with the North American Hockey League’s Austin Bruins in the fall of 2013 when the club abruptly cut him. He returned home to Bolingbrook and pondered giving up the sport he had been playing since he started skating at the age of 3.

“He was sitting on the couch and he told me, ‘Mom, I’m done with hockey,’” Barbara said. “We went for a walk, and we were talking about it and I said, ‘Sometimes you have to take a step backwards to move forward.’”

His family encouraged him to give hockey one more chance since it was the middle of the semester, too late to enroll in college. Caprio joined the Minnesota Junior Hockey League’s Central Wisconsin Saints in the middle of the season, and he tallied six goals and 12 points in 17 games. The successful stint landed him with the Illini the following fall of 2014.

Joey’s dad, John Caprio, said he is impressed with the growth he has seen from Joey in his three years at Illinois. The younger Caprio is accumulating more ice time this season than ever in his career, averaging more than 20 minutes per game.

“In hindsight, maybe the struggles were a good thing,” John Caprio said. “He’s playing Duncan Keith, Brent Seabrook minutes, and it has really renewed his love and desire (for hockey).”

John was one of Joey’s first coaches. He groomed Joey as a forward in youth hockey, but he let a coach move him to defense — the position he has stuck with ever since.

“I kick myself to this day for allowing him to play defense,” John said. “I played defense, and I never wanted either one of my kids to do that. It’s like being an offensive lineman in football, it’s a no glory position.”

Caprio has had a successful career as a defenseman and is one of Illinois’ most versatile defenders. He has four goals and 13 points this season, solidifying his role as a two-way defenseman.

He said getting to conduct the defense is his favorite part of hockey.

Junior Joey Ritondale, the team’s captain and Caprio’s defensive partner since they both arrived on campus in 2014, appreciates the effort Caprio put forth to get back on the ice and to make an impact in their pairing.

“We complement each other really well with our game styles and the way we play,” Ritondale said. “I think we both like to think of ourselves as defensive defensemen, but we can also move the puck and get up in the play.”

Ritondale and Caprio live in the same apartment complex on campus. He says the two have chemistry off the ice because they hang out daily.

Caprio, one of the team’s main jokesters, had the support of Ritondale and his teammates during the rough stretch.

“A lot of the guys were 100 percent supportive of him,” Ritondale said. “We just wanted to see him back on the ice. He’s a key part of our team and he always has been, and he will be until the time that he graduates.”

Through the support of his teammates, coaching staff and parents, Caprio has changed mentally and physically. He has also changed his diet.

Today, lunch may just be a SlimFast shake. Dinner will be some source of protein, like steak or chicken, and he is no longer eating all those carbs.

Still, he finds a way to sneak some of his favorites into his diet, even after everything he has been through.

“I like hamburgers,” Caprio said. “I like eating hamburgers, and I usually want a bun, but right now, I’m only doing the patty and the cheese.”