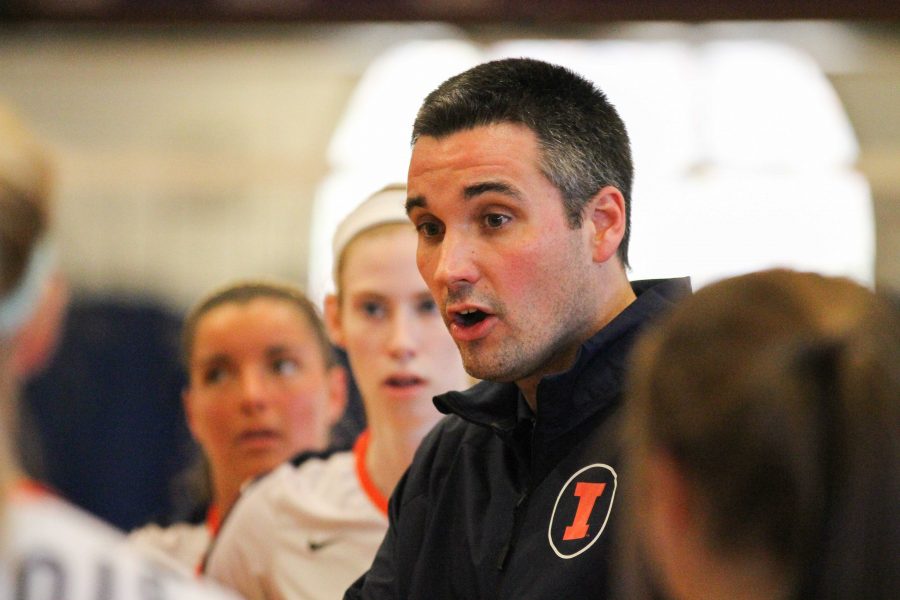 Illinois’ head coach Kevin Hambly talks with his team during the Illinois vs. Kentucky volleyball game at Kenney Gym on Saturday, April 19, 2014. The Illini won 3-1.

Kevin Hambly will no longer be the head coach of the Illinois volleyball team.

After eight seasons — including six trips to the NCAA tournament and a national championship runner-up finish in 2011 —Hambly has decided to go home to California and take over at Stanford.

The Cardinal are the defending NCAA champions. Next season, Illinois’ former head coach will try to lead his new team to its eighth national title in program history.

Thousands of miles away in the Midwest, the Illini will try to bounce back from a season that included a seven-game losing streak and ended with no invitation to the NCAA tournament.

But before any of this can happen, Illinois must first find a new head coach. Here are five candidates that may find interest in picking up where Hambly left off.

Tamas has been the assistant coach at Nebraska since 2015. In his first season, he helped turn the Cornhuskers into a defensive juggernaut. Nebraska held its conference opponents to a .167 hit percentage before going on to win its fourth national championship. Although Tamas has only been in Lincoln for two years, he isn’t a newcomer to Big Ten competition. He also coached at Minnesota and helped lead the Gophers to the Sweet Sixteen and Elite Eight. Under his guidance, Illinois could return to the NCAA tournament, which they missed last season for only the second time in eight years.

In Gray-Walton’s eighth season as an assistant coach at Kentucky, the Wildcats finished 22-7 and reached the NCAA tournament for the 11th straight time. In addition to her responsibilities on the sideline, Gray-Walton is also one of the nation’s top recruiters. Each of her signing classes have been ranked in the top-25. After previously being named to the AVCA’s “Top 30 Coaches Under 30,” in 2012, now might be her chance to take over an incoming top-25 class at Illinois.

Penn State is tied with Stanford for the most national titles in NCAA volleyball history. But before the Cardinal tied the Nittany Lions’ record this past season, Rockwell was there when Penn State stood alone. In 2014 — Rockwell’s first year as an associate head coach for the Nittany Lions —she helped lead Penn State to a straight-sets victory over Brigham Young University in the national championship. In addition to her experience coaching in the Big Ten, Rockwell also played for Penn State from 1991-1994 and was named to the All Big-Ten team four times. If she were to choose Illinois, she would have the chance to coach sophomores Jordyn Poulter and Ali Bastianelli who were just named to the All Big-Ten team this past season.

Mansfield was just hired as assistant coach at Illinois in May of last year, and has obviously not spent that much time as a part of Illinois program. But if the Illini are willing to look internally and take a chance, they may find out that their new head coach is already here. Mansfield has 15 years of collegiate coaching experience, but before he came to Illinois, 14 of those seasons were spent at the school Hambly just left for — Stanford. Mansfield could follow in the footsteps of his predecessor, but if he wants to call the shots, his best bet may be in Champaign.

Lindsey, like Mansfield, was just added to the Illinois coaching staff as an assistant coach last season. Unlike her counterpart, Lindsey does have some collegiate head coach experience. She spent five years at Dartmouth College, leading the Big Green to a school record of nine Ivy League wins in 2015. During her playing days she was also a four-year starter and two-time captain at North Carolina. Lindsey was named the 1998 ACC Player of the Year as a setter. If she was given the opportunity to be a head a coach at Illinois, she’d have the chance to share her knowledge of the position with current standout setter and team leader Poulter.