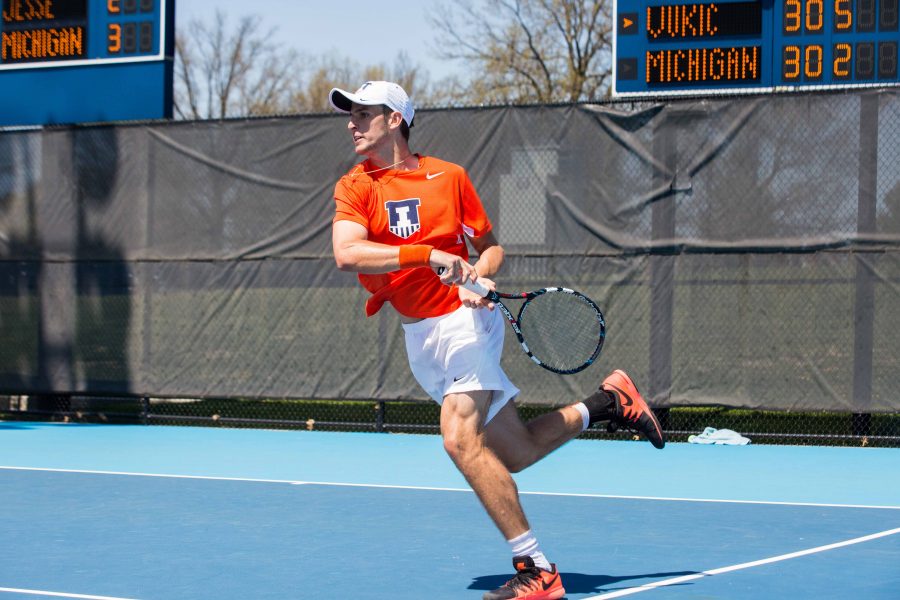 Illinois’ Aleks Vukic returns the ball during the meet against No. 21 Michigan at the Atkins Tennis Center on April 17, 2016.

After defeating No. 25 Arkansas losing to No. 16 Oklahoma, the No. 17 Illinois men’s tennis team is ready for this weekend’s action. The Illini will host Duke and North Carolina at the Atkins Tennis Center on Friday and Saturday in their home opener at 6 p.m.

Head coach Brad Dancer said his team was unprepared to face Oklahoma, but is excited to face Duke this weekend.

“I give tons of credit to Oklahoma,” Dancer said. “They have great players and a coaching staff that had them prepared. OU exposed us, and we were a mess.”

The Illini fell to the Sooners on Sunday in three singles matches. Oklahoma stole an early advantage in the doubles competition when freshman Gui Gomes and senior Alex Jesse fell in doubles to Andrew Harris and Spencer Papas. Junior teammate Aron Hiltzik and freshman Noe Khilf were defeated by Florin Bragusi and Alex Ghilea.

“It doesn’t feel good to have this experience, and there was nothing enjoyable about it,” Dancer said. “When this happens, you know as a coach you could have prepared your team better.”

Although Illinois fell to Oklahoma, the men found success against Arkansas last Saturday.

The men practice playing full sets in order to hone in on their individual game style, according to Dancer. When facing upcoming opponents, it’s important for players to know how to score in any situation.

“We’re kinda trying to individualize that preparation by getting them in the right mindset — hitting shots they wanna hit overall, understanding their game and how it’s going to impact their opponent,” Dancer said.