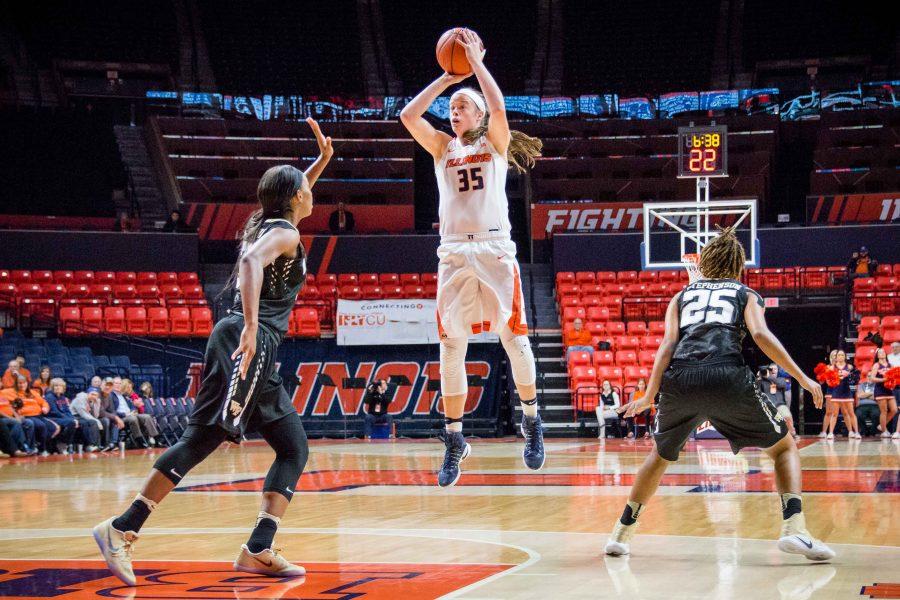 Illinois’ Alex Wittinger shoots a jumper during the game against Wake Forest at State Farm Center. Wittinger has been solid for the Illini, recording her seventh double-double.

Summary: Petra Holesinska scored 21 points and Brandi Beasley added 20 of her own in the Illini loss. Illinois struggled on the glass, getting out rebounded 40-22. The team has lost six straight games.

Key player: Petra Holesinska (21 points, 5 rebounds, 4 assists)
Quote of the game: “I thought Brandi and Petra both made a lot of plays, and it was great to see them step up. I was certainly proud of their fight and thought that we played a very aggressive, hard-fought second half.”
Up next: Maryland (Feb. 9)

With 5:23 left in the game, Illinois’ Petra Holesinska and Purdue’s Ashley Morrissette received technical fouls for a scuffle at mid-court. Morrissette fouled Holesinska, before the two came face-to-face to exchange a few words.

“It was an emotional game, so these things happen sometimes,” Holesinska said. “But she was like saying something in my face, and the (scuffle) happened.”

Illinois’ Brandi Beasley said the situation was handled well, but Purdue was too much too handle and the Illini lost their third straight home game, 72-64.

Before the final buzzer, the teams got into another tussle over a loose ball. Officials came in to get both teams’ players to return to their benches and then went immediately into a media timeout.

“You can’t just let a team bully you like that,” Beasley said. “I think we did a good job of just staying with it and keeping a tough mentality.”

Holesinka and Beasley fought hard to keep the Illini in the game – scoring 21 points and 20 points, respectively – but ultimately, Purdue had too much firepower, and the Illini were outrebounded 40-22.

Prior to the game, head coach Matt Bollant said his team would have to lock in on defense to slow down Purdue’s leading scorers — Morrissette and freshman Dominque Ogden who are averaging 15.8 points and 10.8 points per game, respectively.

Morrissette and Ogden came into the game knocking down a combined 71 three-pointers on the season, and in the first half of Sunday’s game, they found their stroke early and often against the Illini defense. Ogden led all scorers at the break with 17 points, behind five made threes. Morrissette shot a perfect 4-for-4 from three-point territory.

“In the first half, we didn’t do a very good job finding the two shooters,” Bollant said. “Purdue usually makes four threes a game, and (it) made nine in the first half.”

Beasley led the Illini at halftime with 12 points on 60 percent shooting. Freshman Petra Holesinska and sophomore Alex Wittinger chipped in with eight points apiece. Illinois shot 51 percent from the field, but Purdue shot 75 percent from the three-point line, taking a 41-32 lead into the half.

After the break, the Illini dug back into the game, cutting the lead down to four after a three-pointer by Ashley McConnell. But that was as close as Illinois would come to taking the lead in the second half.

The Illini were only ahead for a few minutes of the entire game. But with 2:53 left in the first quarter, the Boilermakers took the lead and never looked back.

Beasley continued her hot streak, recording her third consecutive 20-point game. The Illinois freshman had several head-turning plays in Sunday’s game, including a coast-to-coast left hand layup and a fade-away turnaround jumper over one of Purdue’s tallest defenders.

Wittinger was the Illini’s main post threat against the Boilermakers. She finished the game with 14 points on 50 percent shooting.  Wittinger also blocked a game-high five shots and snagged seven rebounds. Even though she tied for the team-high in turnovers with three, Bollant spoke highly of his starting forward.

“I thought Alex was great honestly,” Bollant said. “I know she’s frustrated. She wants to win, and sometimes she shows that on her face. But I thought she did a lot of good things. Alex played her butt off, and we need a few more kids to play with that kind of heart and that kind of intensity.”

Illinois has now lost six straight games and are 8-7 overall at home. The Illini haven’t won since a home blowout victory over Nebraska, but unlike the team’s previous outings, Bollant was pleased with his team’s effort at the end of the game.

“I thought the crowd was great, (helping) us get back into it,” Bollant said. “I thought Brandi and Petra both made a lot of plays, and it was great to see them step up. I was certainly proud of their fight and thought that we played a very aggressive, hard-fought second half.”