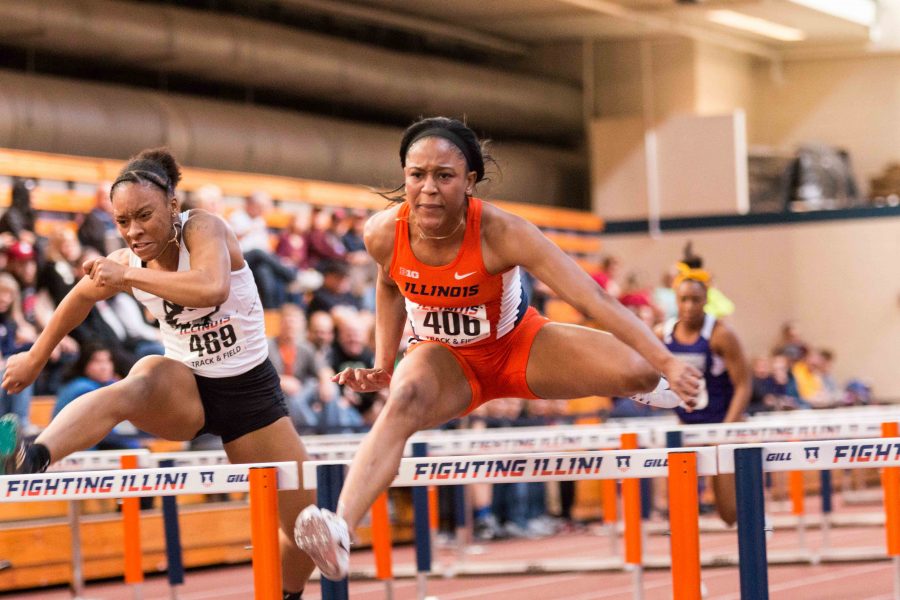 Illinois’ Pedrya Seymour leaps over a hurdle during the Orange and Blue meet on Saturday, February 20, 2016. Pedrya won the 60 meter hurdles with a time of 8.27 seconds.

The headliner for the Illini last weekend was a rematch between Seymour and Purdue’s Devynne Charlton. Teammates for the Bahamas in the Olympics last summer, Charlton won the Big Ten in the event last year, while Seymour took third. Two weeks ago, Seymour edged Charlton in 7.98 seconds, a mark that was the fourth-fastest in the world this season.

Charlton had the edge this week on Seymour every step of the way. While Seymour’s time improved each run through the preliminaries, semifinals and finals, it wasn’t enough to top Charlton. The Boilermaker won the event in 8.02 seconds, besting Seymour’s 8.09.

The two finished first and second in each round of the event. Illini Jayla Stewart ran a season-best and Kortni Smyers-Jones tied her season-best to advance to the semifinals. Stewart finished in 10th, two places out of a spot in the final.

Illinois high-jumper Kandi Bloch-Jones, who had won every competition this season, did not compete at Notre Dame. Instead, the Illini’s top finisher in the event was freshman Brenda Kendziera in 15th. The winner of the event unattached Elizabeth Evans jumped 1.79 meters. Bloch-Jones’ best mark of the season is 1.85 meters.

In distance, senior Valerie Bobart set a personal best in the 3000-meter run with a time of 9:55, good for 26th overall. She shaved five seconds off her previous best from last season’s Iowa State Classic and nine seconds off her run at Kentucky’s McCravy Invite on Jan. 20 and 21. She was 29th last year at Indoor Big Tens in the event.

Hylton’s time put her in 26th place through the preliminaries, and while she did not advance to the semi-finals, her mark was .06 seconds faster than her previous season-best of 7.73 seconds at the Illinois Women’s Dual on Dec. 3 and the Border Battle on Jan. 6 and 7. She was second in the event last year at the 2016 Illinois Top Times, a de facto indoor state championship that takes top performers in each event.