Illinois wrestling win streak up to six after derailing Purdue 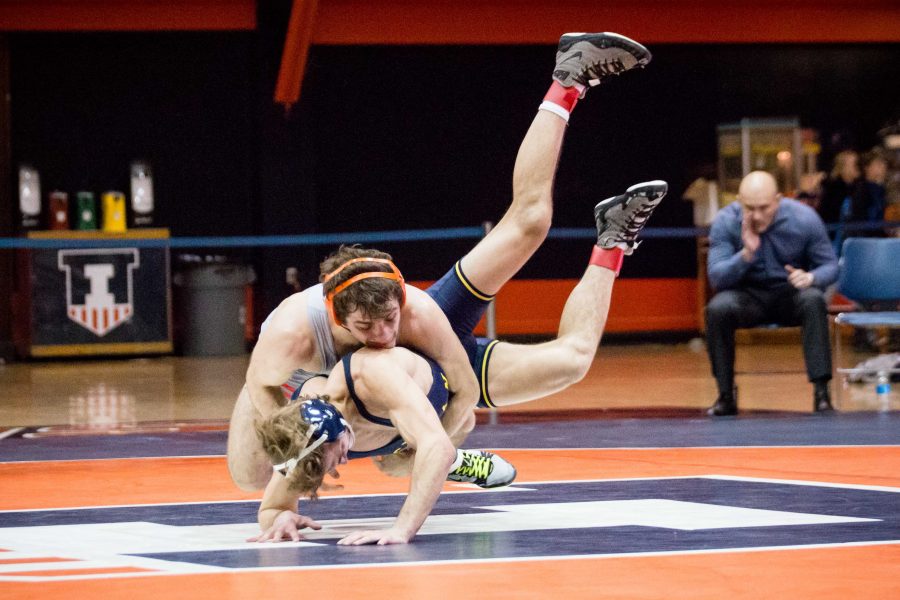 Illinois' Zane Richards wrestles with Michigan's Stevan Micic in the 133 pound weight class during the match at Huff Hall on Friday, January 20. Richards won by decision and the Illini defeated the Wolverines 34-6.

Standing 5-foot-3 and weighing 133 pounds, Zane Richards may not give the same impression as an offensive lineman from the football team, but there are few athletes on campus who have accomplished more than Richards has.

The senior moved into the Illinois wrestling all time top-ten for wins last weekend. Richards defeated Northwestern, giving him 100 career wins and followed it up with another victory against Purdue.

Richards isn’t ready to sit back on his laurels yet.

“I’ve got other things in mind that I want to accomplish,” Richards said. “My focus is on other things heading into the postseason.”

Much like Richards, the rest of the wrestling team have begun their push toward the postseason, now with six wins in a row after defeating Northwestern, 28-15, then Purdue, 30-6.

“We are really starting to pick up the pace,” senior Zac Brunson said. “We are looking to peak when it matters most.”

Brunson picked up his 99th win on Sunday, a 13-1 victory that gave the Illini a commanding 24-3 lead, blotting out any hope of a comeback for the Boilermakers.

Both Richards and Brunson are focused on finishing strong, but the former roommates know what they have done so far.

“There’ll be a time when I reflect on it,” Richards said. “I’ll probably be like 40 in a recliner or something … it’s an honor I got to represent this University.”

While Brunson is behind Richards in individual wins, he is not losing any sleep knowing he could finish under his friend in the total wins column.

“I want it for him as much as he wants it,” Richards said.

The win marks the sixth straight double-digits win for the Illini, a stat reflecting the depth at all 10 weight classes.

“I don’t know that I’ve been on a team where all 10 guys are this focused this late in the year,” Richards said. “It’s motivating.”

Richards may be feeling the payoff of his own development, as head coach Jim Heffernan praised his growth as a leader.

Against Purdue, Richards, Barone, Langenderfer, Martinez, Brunson, Parker, Andre Lee and Black all earned victories. Langenderfer pinned his opponent in under a minute, while Martinez claimed another technical fall victory, 25-10.

While many teams would be overjoyed with the recent success the Illini have experienced, Heffernan kept his tone the same as when they had just beaten Michigan for the first win of the streak.

The Illini will finish the regular season next weekend with a dual match at No. 2 Penn State on Friday, then against Indiana at home on Sunday.