Illinois Ice Arena to close in March for renovations 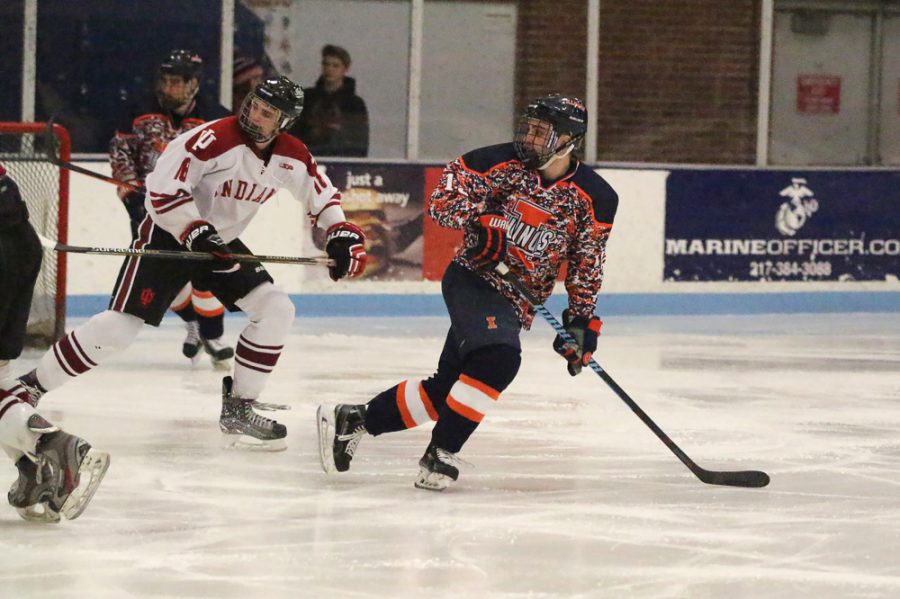 Eric Cruickshank waits for a pass at the Ice Arena on Jan. 28. The Ice Arena will close in March for renovations.

The Illinois Ice Arena will close its doors on March 17 and begin interior renovations, highlighted by a new refrigeration system.

Ice Arena Associate Bill Zeman said the goal is to finish renovations by the end of July. Officials aim to have the Ice Arena open by the start of the 2017-2018 school year.

Zeman oversees operations and staff scheduling for the Ice Arena.

“We’d like to close early and open on time versus close on time and open late,” Zeman said. “(A delayed open) will affect our users much more.”

The closure will affect open skates and intramural hockey on campus.

He said the projects will cost about $1.6 million and are funded by Campus Recreation reserves.

The Ice Arena, known to rink rats as the Big Pond, opened in 1931. The ice surface is among the largest in the country, measuring at 192 feet long and 115 feet wide.

The main component of the renovations is a new portable refrigeration system. The system will cool down the concrete floor underneath the surface to freeze the ice. It will be placed above the Zamboni room off to the side of the rink.

There currently is a gap between the glass and the overhang seating in the Ice Arena.

Illinois hockey defenseman Joey Caprio said the repairs will allow the Illini to play a different brand of hockey next season.

“Our boards are pretty old,” Caprio said. “When you’re in a defensive zone, it is hard to chip pucks off the glass and go high and hard off of the glass.”

Other facets of the project include replacing the rubber flooring throughout the facility, painting and possibly a new scoreboard.

“One was $8 million, one was at $15 million to renovate (the Ice Arena),” Zeman said. “To build a new facility was in the area of $40 million, and it would be in a different site. We just don’t have the funds for that at this point.”

Zeman said there are still other parts of the facility needing renovations in the near future. He said the locker rooms currently have poor ventilation, and the windows need to be replaced.

“Within the next few years, the decision needs to be made whether to renovate this building or build a new facility,” Zeman said. “They need to figure out where the funding is going to come from.”