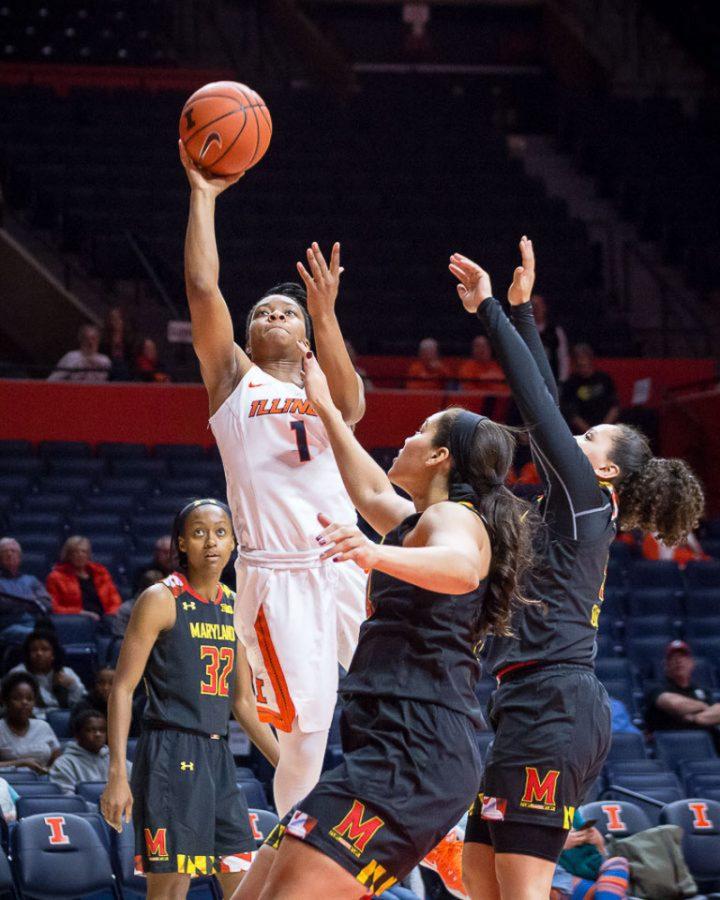 Illinois’ Brandi Beasley (1) goes up for a layup during the game against Maryland at State Farm Center on Thursday, January 26.

Over her last three games, Beasley has racked up 69 points, 16 rebounds and 12 assists. She also leads all Big Ten freshmen in rebounding, and she stands at just 5-foot-6.

Bollant said that if she maintains this level of play, she has the potential to be named Big Ten Freshman of the Year. But on Thursday, Beasley and Illinois will take on another talented freshman – Destiny Slocum.

Slocum is the starting point guard for a Maryland squad that has lost only two conference games over the past three seasons. The former five-star recruit is averaging 11.1 points and 5.6 assists, helping the Terrapins to an undefeated record in the Big Ten. Maryland’s 11-0 start in conference includes a 94-49 victory over Illinois two weeks ago.

In the first matchup, Slocum dazzled the State Farm Center crowd with her no-look passes and timely baskets. After the big win, head coach Brenda Frese believed it was her team’s best performance all year.

“I loved our energy on both ends of the floor,” Frese said. “We really had been working hard to play a forty minute game and I thought, for the most part, we did that tonight. Again, it’s a championship mentality. When you care about each other’s success more than your own, great things are going to happen.”

The rematch will take place in College Park, Maryland, where the Illini will try to hand the No. 1 Terrapins their second home loss of the season.

Maryland’s only loss at the Xfinity Center was against ACC powerhouse Connecticut. The Huskies have won four consecutive national championships and are winning by an average of 33 points per game this season. But back in December, Geno Auriemma’s squad only defeated the Terrapins by six.

Illinois is still in search of its first road victory. In nine attempts this season, the Illini have been outscored 708 to 528 and have shot just 37.2 percent from the field. Bollant acknowledged his team’s poor performances on the road and highlighted a few areas that his team would need to improve on in its rematch against Maryland.

“One (improvement is) just making sure we get back on defense and not letting their point guard throw it to their post running the floor,” Bollant said. “(Also) our shot selection — when they get a turnover, they get rebounds, (Slocum) makes good things happen. So, trying not to turn the ball over and making sure we’re shooting a good percentage.”

Freshman Petra Holesinska has helped Illinois pick it up on offense in recent games, and she will look to continue that trend against Maryland. As Illinois’ starting guard, she scored a career-high 21 points in the team’s last game against Purdue and is averaging 13.3 points over the last three contests. Even with her improved scoring, Holesinska’s main focus remained on the other side of the ball.

“(We have to) get better in our transition defense,” Holesinska said. “They had many wide-open layups (in the previous game). They just run the floor and pass to the post and shoot a wide open layup.”