Brunson gets win No. 100 in Illinois wrestling senior night victory 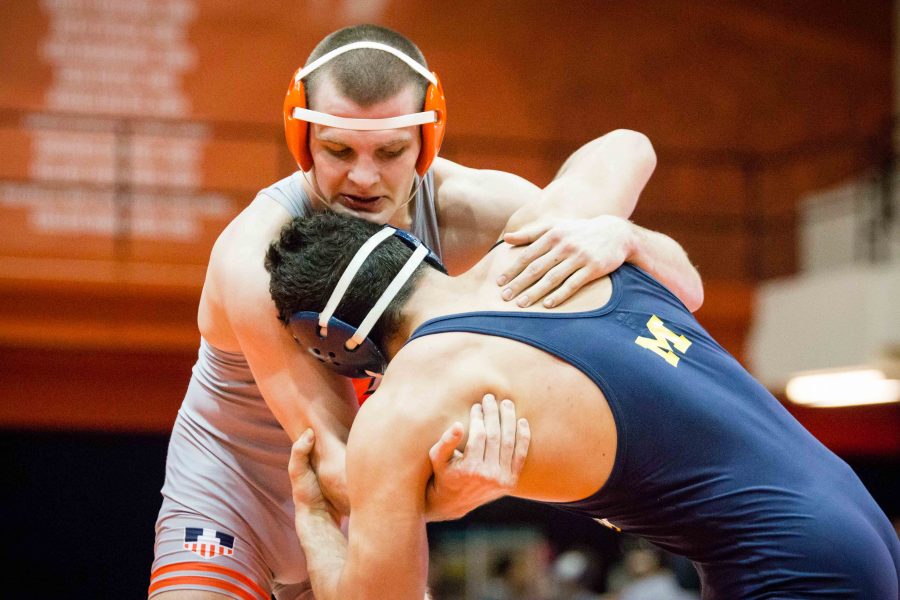 Illinois' Zac Brunson wrestles with Michigan's Myles Amine in the 174 pound weight class during the match at Huff Hall on Friday, Jan. 20. Brunson celebrated his 100th win against Indiana from his final home match Sunday. The Illini ended the regular season 9-3, 6-3.

Like he has done 100 times in his career at Illinois, Zac Brunson shook hands with his opponent, then had his left hand raised by the official.

The Illini crowd stood and applauded, just as it has all this year at home.

However, unlike the past, there won’t be a next time.

Brunson claimed his 100th victory on the last night he will take to the mat in Champaign — a 5-3 victory that resembled many of his 99 others — methodical, calculated and efficient.

While Brunson has had his share of important matches, he knew this one was a bit different.

“I understood this match was kind of a big one,” Brunson said. “I tried my best to focus as if it was just another match.”

It wasn’t just a big night for Brunson, as Illinois bounced back from a 34-7 loss against Penn State on Friday, which snapped a six-dual win streak.

“We really think we are better than the showing we had,” Brunson said. “That Penn State meet means really little going into the Big Ten and NCAA tournament.”

“I don’t think we competed as well as we could have,” Heffernan said. “They kicked our rear end pretty good.”

However, both felt that the Illini responded well against Indiana, and it showed on the scoreboard. The Illini got technical falls from Richards and Martinez, with Martinez finishing another undefeated regular season.

“I think they did pretty well actually,” Heffernan said.

Again, Brunson and Heffernan were on the same page.

“Coming out and having a good performance against Indiana was huge,” Brunson said.

The Illini finished the regular season 9-3 with a 6-3 Big Ten record.

The Illini have three weeks off before the Big Ten tournament begins, and then they move into the part of the season Heffernan calls “ridiculously competitive.”

“The stakes are raised every week,” Heffernan said. “But it’s nothing these guys haven’t done before.”