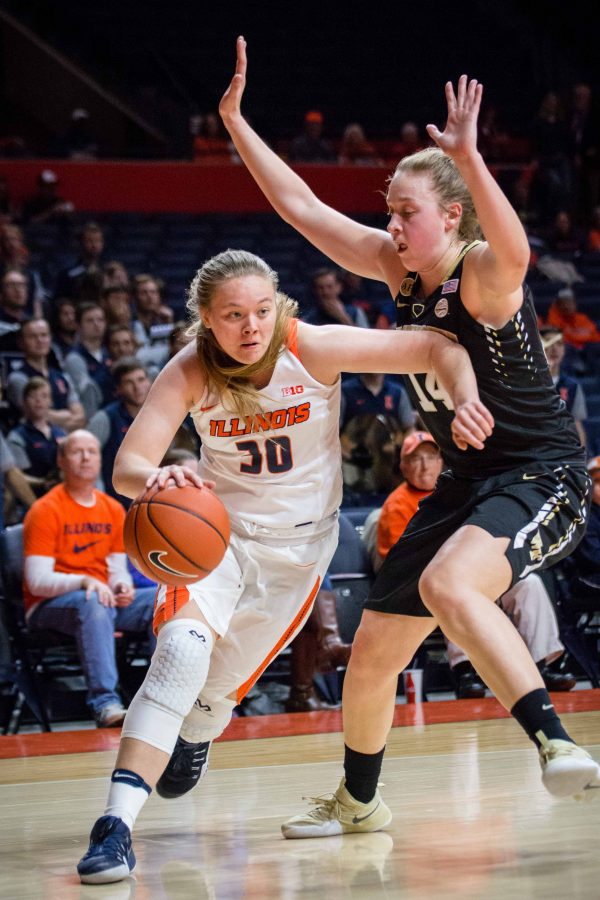 Illinois’ Courtney Joens (30) drives to the basket during the game against Wake Forest at State Farm Center on Wednesday, November 30. The Illini lost 79-70.

During the first timeout of the game, the Illinois women’s basketball announcer took a moment to recognize anyone at the State Farm Center who had been affected by breast cancer.

Women and men from both crowds stood up together in a moment of solidarity. The simple act highlighted why the Illini were wearing pink jerseys — it was the team’s annual Play4Kay night, honoring Hall of Fame head coach Sandra Kay Yow who died from breast cancer in 2009.

After the brief moment, Illinois and Penn State continued its Big Ten battle, where the Illini found themselves in a 15-0 hole.

“We talked about coming out with passion and playing with energy, and that’s on our coaching staff,” head coach Matt Bollant said. “We didn’t do that and we got to find a way to help them do that.”

Sophomore Alex Wittinger finally got Illinois on the board with 5:12 left in the first quarter. But the slow start cost the team in the long run. The Illini were outscored 24-8 in the first quarter and trailed the entire game. Penn State went on to win 80-62, and improved to 8-6 in Big Ten play.

Freshman Courtney Joens tried to keep Illinois in it early, scoring 11 points in 12 minutes during the first half.

But Illinois’ two leading scorers struggled to find their shooting touch. Freshman Brandi Beasley and sophomore Alex Wittinger shot a combined 2-for-16 from the field, including a 0-for-4 performance from beyond the three-point arc.

Beasley picked it up in the second half, finishing with 17 points, two rebounds and three assists. Wittinger snagged a game-high 12 rebounds, but managed to only score eight points. It was her first time not scoring in double-digits since December of last year, snapping a 17-game streak.

“She kept trying,” Bollant said. “She had two or three threes in the first half that went in and out. They were good takes and so I thought if that’s not working, let’s try to get her inside.”

Freshman Petra Holsinka had a quiet first half, making only one shot. But after the break, Illinois’ top three-point threat took advantage of Penn State’s zone defense. Holsinka finished the game with five three-pointers, knocking down four shots from beyond the arc in the second half.

“Well, we were down by like 20, so I kind of had to shoot” Holsinska said. “There were great passes by Brandi and (junior Kennedy Cattenhead) so they helped me a lot.”

Her 17 points were tied for a team-high with Beasley and the most points she’s scored since posting a career-high 21 points against Purdue on Feb. 5.

Thursday’s loss dropped Illinois to 3-10 in conference and 8-8 at home. The Illini are currently on an eight-game losing streak and have not won a game in a month.

Illinois has three remaining games against Northwestern, Wisconsin and Indiana before the Big Ten tournament.

Beasley is looking forward to ending the season strong, but knows her team must play like it did in the second half against Penn State to have a shot at winning. The Illini outscored the Nittany Lions by two in the game’s final 20 minutes.

“It’s just straight facts,” Beasley said. “We had to get it together. We knew we didn’t (start out playing) like we were supposed to be playing.”