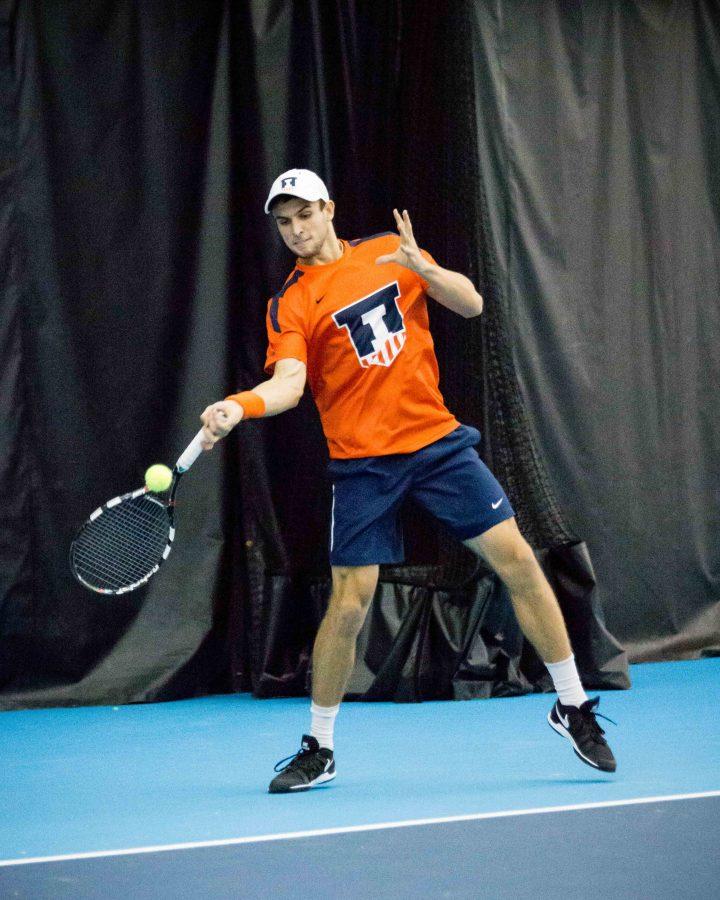 Illinois’ Aleks Vukic returns the ball during the match against Indiana at Atkins Tennis Center on Friday, February 10.

Big Ten Tennis Athlete of the Week Aleks Vukic scored Illinois’ lone point against No. 1 Virginia at a doubleheader Tuesday in Charlottesville, Virginia.

Illinois swept William and Mary in the morning 4-0, but struggled against Virginia.

The Cavaliers started off with doubles points and won the first four singles matches to take a 5-0 lead over the Illini, setting the tone for the rest of the day.

Illinois head coach Brad Dancer said the Illini were not prepared to face the Cavaliers, and he was disappointed overall by the match.

“We always talk about culture and the process of improving and progress,” Dancer said. “I felt we took a small step back in defining ourselves,” Dancer said. “I’m recognizing preparation errors on my part and there is no excuse for that.”

No. 21 junior Aron Hiltzik and Vukic fell in doubles to No. 55 Luca Corinteli and Carl Soderlund. Corinteli was a member of last year’s ITA All-American Team in doubles, and was named to the NCAA All-Tournament Team as the top-ranked player in doubles.

The Cavaliers currently have five players ranked in the ITA’s top 60.

“Virginia is a great team. They have loads of talent and are well coached,” Dancer said.

Vukic then defeated Collin Altamirano in two sets, to collect the only point for the Illini.

In singles, Virginia collected wins over Hiltzik, redshirt-senior Julian Childers and freshman Zeke Clark, keeping the advantage until the end of the match.

Illinois will host a doubleheader against Northern Illinois and Kentucky at Atkins Tennis Center on Feb. 24, beginning at 12:30 pm.