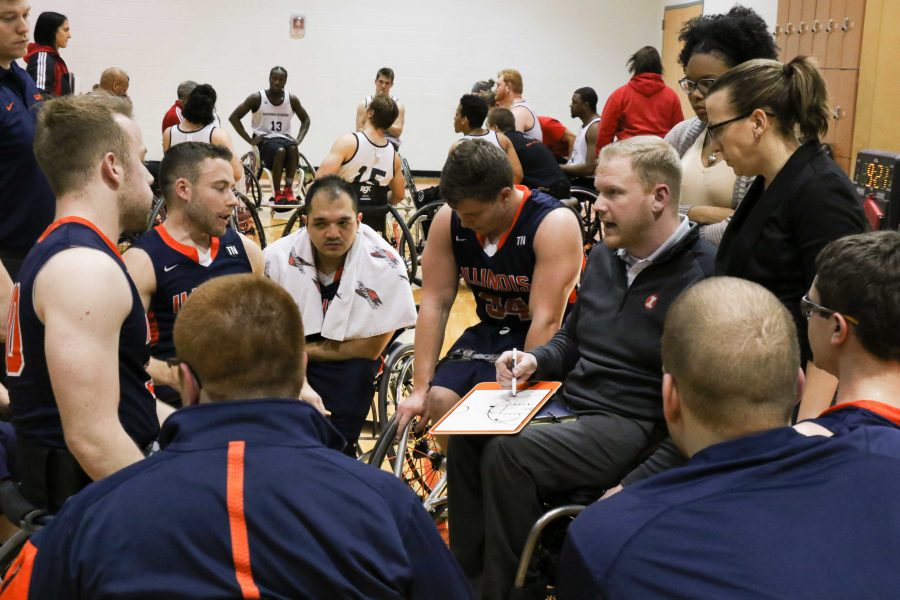 Men’s Wheelchair basketball’s head coach Matt Buchi talks to his players during a timeout at the ARC on Jan. 28th.

After the Illini shot below 35 percent in the first half of two of its three games, Buchi wants the team to start its games with more energy.

“We need to have better preparation at the beginning of the game,” he said. “I think that we are a little too relaxed in our pregame, which then gives us a slow start.”

The Illini will play three games this weekend in its final home tournament of the season. It will start Friday at noon with a game against Edinboro, followed by a rivalry game against Wisconsin-Whitewater. Illinois’ 4 p.m. game on Saturday against Alabama will be its last.

The Illini have been practicing more game-like situations to help the players maintain the same level of play.

“When we get into a game, it’s a high-stress situation, or when it’s late in the shot clock or when it’s a tie game, there’s going to be some more extra stress and speed. That’s just going to be put on the athletes themselves,” Buchi said. “They’ve got to be able to push themselves when we put them in scrimmage situations.”

Buchi, a former wheelchair basketball player at Illinois, said he thinks the home crowd, marching band and cheerleaders this weekend will provide a needed boost.