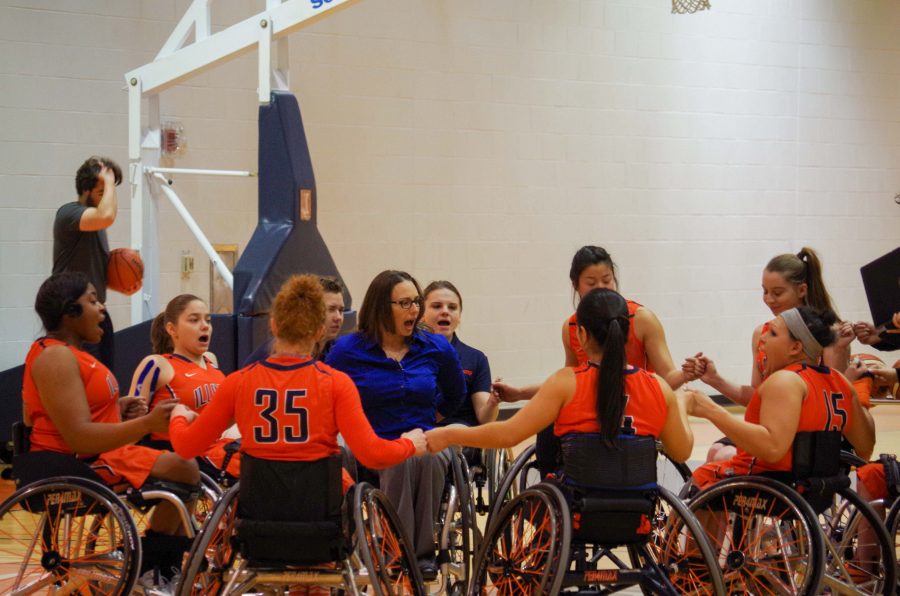 The Illini’s Women’s Wheelchair basketball team chant during half-time against the Canadian National Academy in the ARC on Friday, Jan. 27th.

The Illinois women’s wheelchair basketball team began its practice on Monday with one basketball, along with other balls.

It was for a game known around the National Wheelchair Basketball Association (NWBA) to improve focus and ball handling. Illinois players swerved around the paint while head coach Stephanie Wheeler tossed three different types of balls at the players to catch. Each ball was a different color and size, ranging from a ball about the size of a tennis ball to a football.

After catching the ball, the players traveled across to another court to shoot a layup with an actual basketball.

Wheeler wants to see improvement across the board from Illinois this weekend in its final tournament of the season. The team went 0-2 in its last tournament at Edinboro University in Pennsylvania, where Illinois was outscored by a combined 83-42 by its opponents. Team leader Kaitlyn Eaton’s production was also lacking, exemplified by tying freshman Erica Wilson with a team-high four points in the team’s 36-12 loss to the Canadian National Academy team.

Wheeler said she has not been satisfied with how the Illini have played as of late.

“I don’t think that we played as well as we are capable of playing,” she said. “I’m confident that we’re going to be able to play better than we have in the past tournaments and see some growth individually and collectively and both on offense and defense.”

Wilson, whose role as the team’s big has increasingly become more important, said she wants Illinois to continue the way it’s playing.

“We’ve just become one big unit overall: It’s the defense,” she said. “I think that overall, we have put in a lot of work to become a lot better. We’ve definitely improved a lot.”

Illinois will open its next tournament at noon on Friday against Alabama.